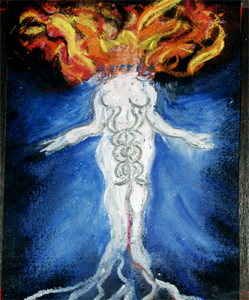 When a weeping child wakes
her mother
in another city,

when coins fall in pattern,

when the electron moves backward in time--
the Ancient Ones are there.

You will find them where clouds quicken
with your eyelids, where
prairie dogs flee their burrows
hours before a quake,
where veined temples ache
with the blue silence
of Tibet.

Behind the songs
sung by Humpback whales,

and beneath a child's memory of her own
conception, there you will find

the Template of Ancient Mind.

(Picture of "Brainstorm" is by Jane Sherry from a personal Talisman and the photo of James, courtesy of the poet. All poems reprinted here with the kind permission of James Bertolino.)