Story of the First US CSA 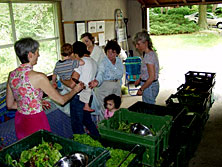 Community Sponsored Agriculture (CSA) is becoming a household word these days; it has received a lot of attention from the press lately. In 2003, The New York Times and Time magazine featured articles on CSA farms. Both articles described the phenomena of CSA from the perspective of a sympathetic journalist. They tried to explain why they think CSA’s have sprouted up all over the nation using their own perceptions and by consulting the “experts”. 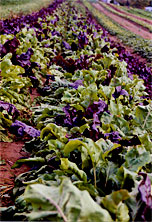 Someone from the Worldwatch Institute (a Washington Think Tank) explained the phenomena (quoted in Time magazine) as: “knowing your farmer brings peace of mind, especially in the face of terrorists threats to the infrastructure, and food-contamination recalls”. A sociologist at Smith College (and the president of the association for the study of Food and Human Society) said (in The New York Times): “We have been sold a bill of goods about convenience in American life.

Convenience marketing has shifted people’s tastes so that eating fresh from the farm is almost something that people need to be re-educated about—what vegetables are and what different apples taste like”. Overall, the articles described quite well the success of CSA; how it has found partners in so many different communities from hunger prevention to land preservation organizations. The idea of supporting a farm by becoming a partner and sharing the risk of production has resonated with a wide variety of people.

In the articles, CSA was referred to as a buying club with its roots in Tekei, a vegetable buying club in Japan. This is increasingly accepted as the origin of CSA. The true story is that the first farm to share the harvest was in Dornach, Switzerland. Dornach is where the Anthroposophical Society has their headquarters. People who study anthroposophy believe that the correct way of doing business is when consumers and producers agree on price and value for each transaction. A guiding principle for both consumers and producers is to offer each other an alternative to an economy based on self-interest and profit motive. 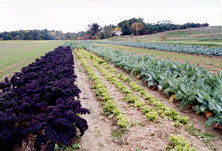 European anthroposophists have made many efforts to establish consumer-producer associations, and the first CSA was an outcome of such an initiative. Local anthroposophists created a partnership with a farmer close to Dornach. Jan VanderTuin, while visiting Switzerland in the mid eighties, saw how this kind of relationship could be very useful for farmers back home and told the story to anyone who was willing to listen.

He found an ear with Robyn VanEn (a Waldorf teacher and landowner) of South Egremont, Massachusetts, who then involved some local anthroposophists to launch this model on her farm. Robyn and her partners started selling cider shares from Robyn’s orchard and later they included vegetables in the share after they had found a biodynamic farmer (Hugh Radcliff).

At the same time Trauger Groh, a biodynamic farmer from Germany, decided to re-settle in Temple Wilton, New Hampshire. He married Alice Groh, and became involved with the local community of biodynamic farmers. He introduced the farmers and the people of Temple Wilton to CSA also, and it resonated. Trauger added to CSA the notion of “Agriculture Supported Community”. 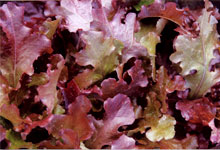 From 1987 until 1989, I worked at Hawthorne Valley Farm, and I witnessed the rising interest in organically grown produce in this country. When I started Roxbury Farm in 1990, I felt that the CSA model was too small for what I had in mind. All CSA’s at that point were relatively small farms. I  saw that a local community did not have the ability to allow a rural based farm to produce what I call “a critical mass” to achieve efficiency. I had a change of heart when some people at “The Center for Anthroposophy” in NYC approached me and asked if I was interested in creating a relationship with New Yorkers based on the CSA model.

After our meeting, it did not take long to make up my mind. It was very exciting to meet people willing to create a marketplace that was not based on self-interest. Obviously, NYC had the critical mass to allow farms to produce in an efficient manner. We resolved many obstacles to make the CSA concept work. When I expressed that I needed to find a truck, one member immediately offered his box truck. A year later, the Committee for Peace and Justice in Albany, had heard about what we were doing. They understood the concept right away, as it was aligned to their philosophy, and recruited 200 members in the Capitol District. 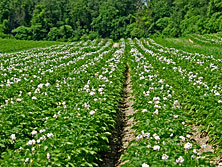 I am telling you this story, because it is important to know why CSA’s were started. CSA exists because of the many people that concluded that this particular way of getting vegetables and fruit works better for both the farmer and consumer. It is important to recognize the selflessness that accompanied those efforts, and pay tribute to the tireless efforts of the many volunteers that have helped bring CSA into the world. Each of them had their own reasons to help make it work, and the model provided a good baseline that resonated with a variety of groups from food banks to land preservation organizations. In the case of Roxbury Farm, we raised the concept to a new level, by securing land for future farmers, with the funds coming mostly from the members.

The last question we can ask ourselves is, if CSA’s will continue to succeed. It is great to have all this attention from the press, but aren’t we just another fad? A friend, biodynamic farmer Fred Kirschenman, said to me ten years ago that the test case for CSA farms is the success or failure of the microbreweries. If the big guys will be able to co-opt the microbreweries, then they will be able to do the same thing to CSA’s. That analogy states our strength concisely. In the end, every CSA is unique, came into existence for a variety of reasons, and its identity is something that the big guys will never be able to replicate.

This year Roxbury Farm will help conclude a ten-year study on CSA conducted by the University of Massachusetts. Roxbury Farm is part of ten farms that were selected ten years ago to examine the viability of the CSA concept.

Two years ago, Jean-Paul was selected as one of twelve farmers in the Northeast (from Maine to Maryland) to participate in NEON (Northeast Organic Network). NEON is a collaboration of Cornell professors in several agriculture departments, and New England Small Farm Institute.NEON has received significant funding to conduct research on organic farms.So far, Roxbury Farm has collaborated on research on crop rotations, use of cornstarch based plastic mulch, and new varieties bred at the Cornell research station.

Next year Cornell University will start two separate two-year studies at Roxbury Farm, one on soil fertility management, and another on cost analysis. These studies will be extensive, and important to the organic farming community. 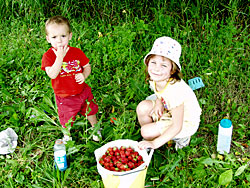 Since 1990, Roxbury Farm has been one of the pioneers of organic agriculture and Community Supported Agriculture in Columbia County, New York. In 1991, Roxbury became the first CSA farm to have a community in New York City. Roxbury continues to be a nationally recognized leader in organic, biodynamic, and CSA. Jody Bolluyt became a partner in 2001. She supervises the day to day farm work and is responsible for the harvest management, distribution, and does much of the administrative work of the CSA membership. Since 1992, Jean-Paul Courtens has led workshops for farmers in other parts of the country and in 1994, he helped to found CRAFT, an organization that trains organic farm apprentices. In 2000, Roxbury became a leader in the farmland protection movement, as a central component in a land acquisition and conservation effort that will not only secure the long term future of Roxbury's farmland, but will be a model for other farms in the Hudson Valley and all over the country.In 2004, Jean-Paul received the Patrick Madden Award for Sustainable Agriculture from SARE (Sustainable Agriculture Research and Education).