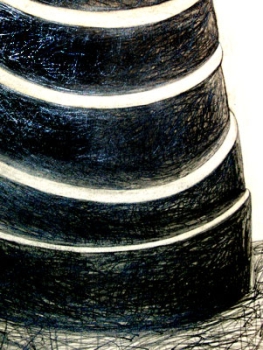 This drawing is part of a series done with graphite on acid free rag paper, representing earth forms. Several others in the series are in the shape of mounds and cave entrances. They were exhibited in Houston, Texas in 1989 in a solo show at Little Egypt Gallery.

Once again, you can see the heavy strokes and scribbling of my hand in the detail to the right. The shapes in this series are very much tied to the first intuitive works I made as a young artist, fascinated by egg forms, mounds, caves and other Mother Goddess symbols.

And the ziggurat, of course, represents our highest aspirations as a civilization -- working to join cultures together to share the best of all of our advancements in peaceful co-operation. The myth of the ziggurat is also tied to the symbology of the tarot cards, where Trump XVI, The Tower, can be seen as a ziggurat. The Tower represents liberation from the confinement of the egoistic personality and the projects of the ego, and also represents the liberation of a community from the oppression of a self-appointed ruling class.