This beautiful St. Andrew Staurolite Cross is a complex crystal formation from Keivy, a city in the Kola Peninsula of far Northern Russia. The staurolite appears embedded in an umber and siena colored matrix of muscovite, mica and schist, which create a myriad of tiny sparkling inclusions.

Genuine Staurolite crosses are quite rare and expensive, and specimens from Kola, Russia are considered to be among those with the most desirable qualities. 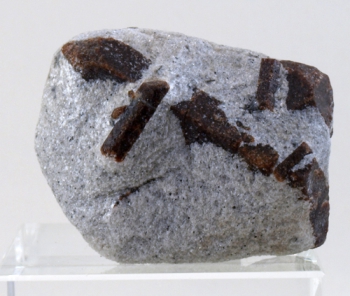 The name Staurolite comes from the Greek words “stauros” (cross) and “lithos” (stone) meaning “stone of the cross”.

The name is appropriate because Staurolite crystals often appear in twin cruciform formations, in the shape of a Greek cross, with a 90 degree angle between the arms, or in the shape of a St. Andrew’s cross, with a 60 degree angle between the arms. A saltire, Saint Andrew's Cross, or crux decussata is a heraldic symbol in the geometrical form of the diagonal cross upon which St. Andrew was said to be crucified. Staurolite cruciform twins have been worn by religious devotees through the ages, and are renowned as sacred natural objects, invested with the power to heal, bring good luck and transform the soul.

Staurolite is known as the Fairy Stone or Fairy Cross, and was said by some to be the crystallized tears of fairies, bereft on hearing the news of Christ’s crucifixion and death.

Another legend has it that Staurolite was used to heal Richard the Lionhearted during his Crusades in the Middle East, when he suffered from malaria.

Present day crystal healers have used Staurolite to ground an individual with a tendency to “float away” from the material world, or to be lost in abstract realms of mental ratiocination. Staurolite has also been used to treat depression, fevers, addictive personality traits and symptoms of stress.

Esoteric Christianity makes a link between hematite and Archangel Michael, and a crystal containing hematite can provide the bearer with a powerful connection to Michael, providing access to the Archangel's loving wisdom and power to dissolve illusion through the activity of his famous sword, the sword of Ultimate Truth.

During the Fall, when sensational meteor showers, largely composed of iron, traditionally streak across the night sky, Esoteric Christian philosopher Rudolph Steiner’s clairvoyant vision saw the traditional flashing iron sword of Michael, who presides over the Fall season. The meteoric sword of Michael was thought to cleanse the Earth’s atmosphere of summer's sulfurous influences, allowing the Higher Self to emerge and guide the initiate along the path of Spirit toward the birth of the Inner Christ Light, an event which takes place in December, during the festival of Christmas.

Archangel Michael is known to crystal healers and Lightworkers as the dispeller of all negativity, the strong sword and shield of the Heavenly Hosts, and the Angelic protector of humanity, endowed the ability to banish all dark spirits. Michael’s stone of strength, hematite assists in the transformation of any and all negativity held in body, mind or heart into the purity of the universal light of love. According to crystal healer Melody, "It [hematite] can be used to stimulate the desire for, and to facilitate the attainment of, peace, self-control and inner happiness."

Put this Staurolite Cross on your altar, on your night table, or on your desk at work to establish an energetic zone of protection and call in the presence of Arachangel Michael to bless your space during meditation, healing sessions, sleep and dreamtime and throughout working hours.

Use this powerful crystal with loving wisdom and respect its long journey in the Earth that has lasted for many long historical cycles.Accepting this crystal into your life is a responsibility as well as a delight. This crystal is not a toy, but rather a powerful tool, a love-gift from the Divine Mother, and should be treated with the utmost respect and appreciation.

Note: Weight above is shipping weight. Net weight is 1.6 oz.