This fabulous Smoky Quartz Super Nova Pendant with a Round cut Tibetan Green Obsidian accent stone is of exceptional quality. The stone is set in a simple silver band setting which allows the stone to breath and function at its highest vibration. See a shot of this piece from the sideview and also as seen from above on this page and also there's a picture of the Valley from which this obsidian originates just below.

The combination of both the blue and green obsidian is a real treat and should assist with grounding, speaking ones truth and heartfelt communications.

This gorgeous, energetically powerful Tibetan Blue Obsidian Earth Heart Pendant comes from the banks of the Yarlung Zangbo River. The Zangbo is the highest altitude major river in the world, originating in the Tamlung Tso Lake in Western Tibet, southeast of Mount Kailash, one of the most sacred sites on Planet Earth. 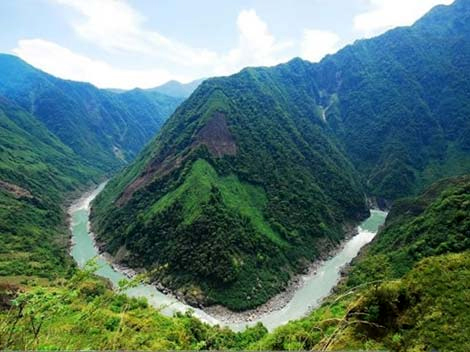 Tibetan Blue and Green Obsidian are stones of personal protection and physical relaxation, a stone of truth-telling, a stone of deep meditation, and above all a stone that connects the bearer to the elementals, devas and nature-spirits who inhabit the elevated regions of the Himalayan Mountains (or your own backyard). This is the place where Earth's mightiest rivers are born -- where snow melt powers the world's cleanest alpine water, fresh from its vortexial flow down steep mountainous streams, to merge into powerful flows that reach down into China and India and Southeast Asia, providing for the needs of billions of people.

This new cut by Paul Jensen of Tools of Evolution line of sacred geometry power cut jewelry originally had no name when we first saw them as pendants at a show last year. They've been aptly named Super Nova, which describes their complexity of facets, which so closely resembles a honeybee hive, with its many faces of hexagonal design. Both the setting & the posts on these earrings are made of sterling silver.This remarkable pendant makes wonderful use of this new spectacular cut. On the back of the Smoky Quartz gemstone is a modified Millennium Cut, a starburst pattern that was created in the early years of the 21st Century by master jewelers to reflect the emerging consciousness of a new millennium. The surface of the Smoky Quartz gemstone is laced with an intricate pattern of flat hexagons, like a honeycomb or the eye of a honeybee. The compound eye of a honeybee consists of an array of hexagonal visual sensors designed to maximize the honeybee's ability to detect tiny movements in shadow and in the lower, infrared light frequencies, enabling the honeybee to achieve maximum awareness of predator movements in deep shadow and also provides amazingly acute peripheral vision. Note: Weight above is shipping weight. Net average weight of this pendant is 4.6 grams. Each piece is unique and may vary slightly in appearance and color. Each piece is guaranteed to be beautiful and to meet with your complete satisfaction!