This stunning Rose Quartz 12 mm Super Nova pendant with Sparkling Danburite oval accent stone is of exceptional quality, both in the cut of the stones and in the simple sterling silver settings which allow the stones to breath and function at their highest vibration. Each pendant comes with an 18" sterling silver chain so that the pendant will lay upon the thymus, between the compassionate heart and the throat chakras imparting support both emotionally and mentally.

This new stone cut by Paul Jensen of Tools of Evolution line of sacred geometry power cut jewelry originally had no name last year, when we first saw them as pendants. They've been aptly named Super Nova, which describes their complexity of facets, which so closely resembles a honeybee hive, with its many faces of hexagonal design. Both the setting & the wire hangers on these earrings are made of sterling silver.

On the back of the Rose Quartz gemstone is a modified Millennium Cut, a starburst pattern that was created in the early years of the 21st Century by master jewelers to reflect the emerging consciousness of a new millennium. 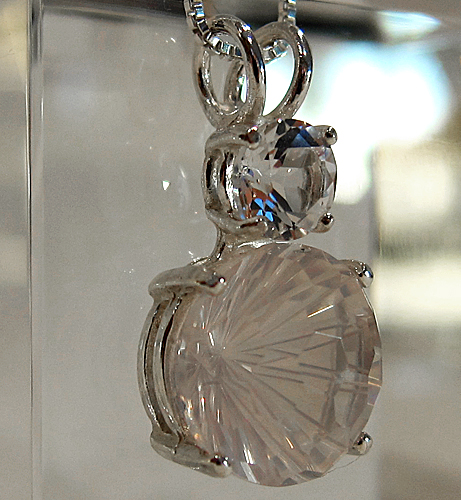 The front surface of the Rose Quartz gemstone is laced with an intricate pattern of flat hexagons, like a honeycomb or the eye of a honeybee. The compound eye of a honeybee consists of an array of hexagonal visual sensors designed to maximize the honeybee's ability to detect tiny movements in shadow and in the lower, infrared light frequencies, enabling the honeybee to achieve maximum awareness of predator movements in deep shadow and also provides amazingly acute peripheral vision.

The honeycomb is also composed of hexagonal cells, so we call this cut the honeycomb cut, and this unique cut is said to help the bearer to bring to consciousness all the information that is normally held subliminally, in the unconscious mind, or which is in the periphery of consciousness and awareness. This honeycomb cut pendant can help to render the bearer much more acutely perceptive, and to enhance the critical spiritual faculty of discernment, which is so vital to us all in today's rapidly changing, tumultuous global environment.It is difficult to capture both the millennium cut back faces of the pendant and the honeycomb cut in photos, but you can see at least one or two of the hexagonal faces on the surface of this remarkable pendant in this photo.

These Super Novas have substantial gemological and metaphysical value, have incredible light shining through the rosy ray & sparkle! Wear these lovelies to light up your days & nights!

Rose quartz resonates with the energy signature of the heart chakra, according to the Western mystery school chakra system, and this gemstone quality rose quartz pendant receives, amplifies and transmits an extremely high vibration of unconditional love and open-hearted compassion originating in Higher Worlds.

Rose quartz projects a soft, soothing, gentle energy , and is especially supportive in cases where an individual is developing the capacity for self love. It sends out an energy of unconditional love, as compared with passionate love, which is why the energy of rose quartz resonates with the heart chakra rather than the lower chakras.

This is a gently healing gemstone, allowing for the slow opening of the heart to healing and loving energies. It supports the wearer or bearer of this stone in all spiritual practices and daily activities that promote the development of compassion for all beings -- and especially for oneself.Rose quartz has often been used in the treatment of wounds to the emotional body, and especially a wounded heart, but can be used effectively in treatment of wounds to the heart, throat, third eye and crown chakra.

Danburite is a very hard stone with a Mohs' hardness of 7-7.5, comparable to sapphires, tourmalines and garnets. Danburite is most often yellowish, brown, or white, but mineral collectors prefer the more rare pink coloration.

Named after the town of Danbury, Connecticut, where this gemstone was first discovered, Danburite presents a vitreous luster, and is prized by jewelers because its extreme hardness and poverty of cleavage enables highly faceted gemstones to be cut from this precious mineral.

Pink Danburite energizes and activates the heart chakra, providing the energetic protection that gives us a feeling of emotional safety and personal power that facilitates the opening of the heart to others, loved ones, friends, family, and indeed the whole of humanity, and all of creation. This gemstone is a stone of compassion, and provides emotional healing that can mend the wounded heart.

From personal experience during meditation with Danburite crystals, I can tell you that much depends upon intent. When my intent has been to quiet the mind, holding one of these crystals reduces mental chatter to virtually nothing, while stimulating the crown chakra, the third eye & the eighth chakra above the crown, creating a feeling of warmth & depth, a buzzing and a tingling on the crown of the head and between the eyebrows. There was a physical awareness of a tremendous flows of energy carried on the inbreath and outbreath from the eighth chakra and higher, spiritual sources, through these vital centers and deep into the body.