This lovely Amethyst Rose de France 12mm Super Nova pendant is crowned with a pear-shaped deep violet sapphire gemstones. It is set into a Sterling Silver Setting which will allow the stones to breath. This pendant comes with a sterling silver chain which sits upon the thymus allowing the energy of this piece to resonate through the compassionate heart. 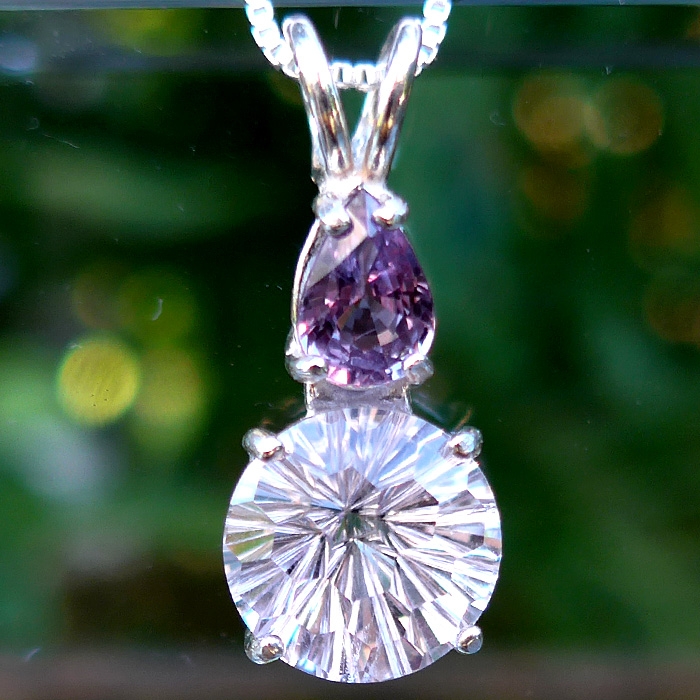 The combination of Violet Sapphire and Rose de France Amethyst energizes the crown chakra, activates the heart chakra and facilitates connection to Higher Self, Higher Mind and the Divine Worlds. This combination of ascension stones resonates with the energy signature of the Violet Flame, and provides a supportive energy for all spiritual practices involving purification of the physical, emotional and mental bodies.

This pendant originally was unamed but beautiful. We first named this piece a 'honeycomb' pendant because of the unique faceting on the stone.

This remarkable pendant combines two spectacular cuts. On the back of the clear quartz gemstone is a modified Millennium Cut, a starburst pattern that was created in the early years of the 21st Century by master jewelers to reflect the emerging consciousness of a new millennium.

The surface of the Super Nova is laced with an intricate pattern of flat hexagons, like a honeycomb or the eye of a honeybee. The compound eye of a honeybee consists of an array of hexagonal visual sensors designed to maximize the honeybee's ability to detect tiny movements in shadow and in the lower, infrared light frequencies, enabling the honeybee to achieve maximum awareness of predator movements in deep shadow and also provides amazingly acute peripheral vision.
The honeycomb is also composed of hexagonal cells, so we call this cut the honeycomb cut, and this unique cut is said to help the bearer to bring to consciousness all the information that is normally held subliminally, in the unconscious mind, or which is in the periphery of consciousness and awareness. This honeycomb cut pendant can help to render the bearer much more acutely perceptive, and to enhance the critical spiritual faculty of discernment, which is so vital to us all in today's rapidly changing, tumultuous global environment.

The sapphire is an extremely hard trigonal shaped gemstone, composed primarily of corundum, or Aluminum Oxide, and is chemically and geologically a sister stone of the ruby. Corundums other than the red ruby are all called sapphire and can exhibit a variety of colorations: pink. orange, green, yellow, pink, purple, blue, violet and black.

Blue sapphire is created from inclusions of the minerals iron and titanium. Violet corundums are formed in the presence of vanadium, while a low iron content produces yellow and green sapphires. Chromium produces pink sapphires. 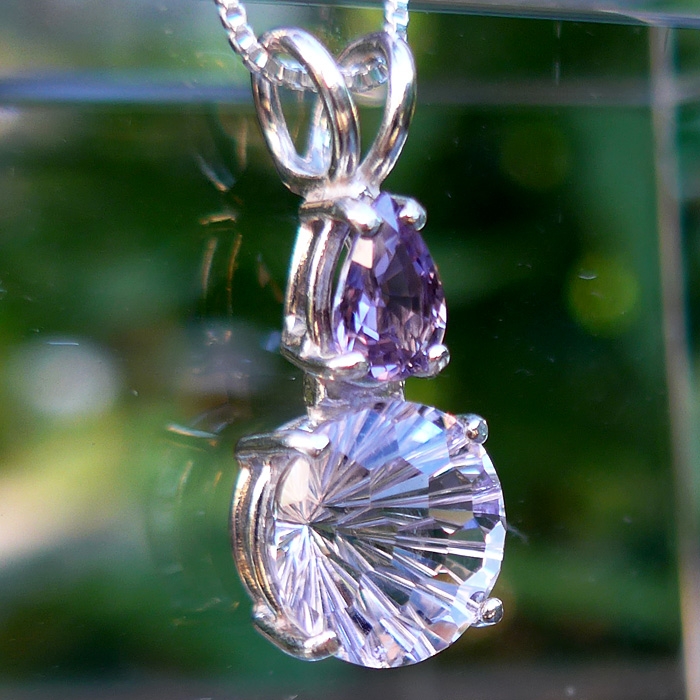 Violet Sapphire resonates with the energy signature of the Violet Flame, and energizes the crown chakra, aiding in the ascension process by raising prana or chi, Universal Life Force Energy, from the lower chakras into the higher chakras.

The Sapphire is the birthstone for the month of September, and is traditionally considered the stone of autumn, its characteristic color the azure blue of an autumnal sky. Sapphire is associated with the qualities of sincerity, constancy and truthful sincerity, and was one of the stones found in the Breastplate of the Israeli High Priest in the Old Testament.

In Vedic Astrology, Sapphire was considered to procure the favor of Saturn, and to assist the bearer in transmuting all Saturnine influences into beneficent aspects of life.

Sapphire, known as a "stone of prosperity" can bring peace of mind, help one to focus & can assist in all aspects of healing for the body. It can aid in working with the throat chakra, and can therefore enhance communications. Sapphire is good to unify our body/mind selves with our higher purpose, our astral & intuitive bodies.

Sapphire can have a purifying affect upon your thoughts and speech so that what we communicate is threaded through with the wisdom of the purified Mind in connection with the Divine.

Rose de France amethyst also empowers us and strengthens us by its energizing effect on the heart chakra, giving us the strength and courage we need to allow our selves to open our hearts fully and experience the compassion known by Jesus and Buddha, the joy and sorrow that accompany the awareness of the interdependence of all living beings.

Note: Weight above is shipping weight. Net weight 4.7 grams with sterling silver chain. Each piece is unique and may vary slightly in appearance. Each piece is guaranteed to be beautiful and to meet with your complete satisfaction!