This unique and beautiful Rose de France Amethyst 14 mm Super Nova Pendant with round White Topaz accent stone is a new cut for the 21st Century from our favorite jeweler, Paul Jensen who brought you the power cuts metaphysical tools line of jewelry which includes the Star of David, Ascension Star, Angelic Star and other Tools for Evolution.

Rose de France Amethyst is a deeply spiritual stone of loving compassion and White Topaz is a powerful manifestation stone said to aid in the creative process. The combination of amethyst and white topaz energizes the heart and crown chakras, connects the bearer to Spirit, inspires the bearer with Wisdom from Higher Worlds, and empowers the bearer to manifest their deepest heartfelt desires in accord with Higher Will and Higher Mind. 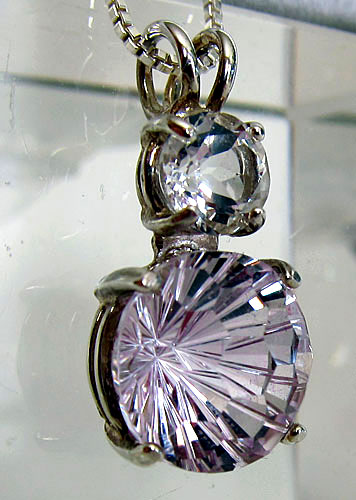 On the back of the Rose de France gemstone is a modified Millennium Cut, a starburst pattern that was created in the early years of the 21st Century by master jewelers to reflect the emerging consciousness of a new millennium.

The front surface of the Rose de France Amethyst gemstone is laced with an intricate pattern of flat hexagons, like a honeycomb or the eye of a honeybee. The compound eye of a honeybee consists of an array of hexagonal visual sensors designed to maximize the honeybee's ability to detect tiny movements in shadow and in the lower, infrared light frequencies, enabling the honeybee to achieve maximum awareness of predator movements in deep shadow and also provides amazingly acute peripheral vision. 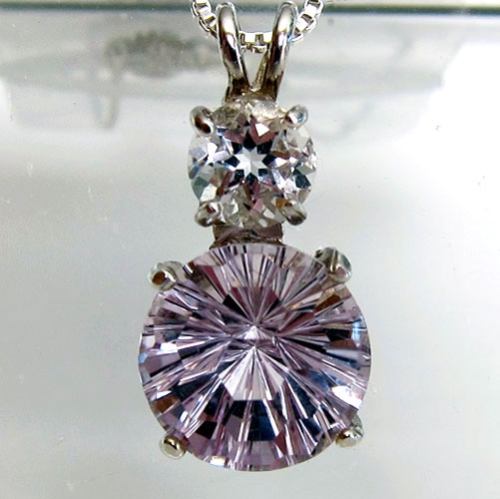 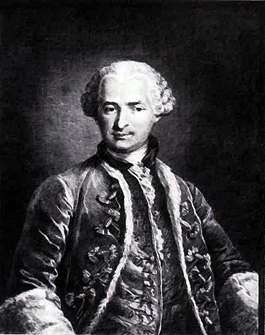 "The ends and facets of a topaz crystal provide both positive and negative currents," says Melody. "This is quite different from quartz. These alternating currents are linked via the ethers to the forces of manifestation through which attraction and desire are promulgated. When a request is directed through the topaz to the object or to the thought form which is desired, the topaz acts as a conductor for the message - sending the message to the ethers via a closed circuit of current which penetrates the energy field related to manifestation. The message is then relayed to the universal mind which, in turn, refines the information and assures that the intent is for the good of all, before sending the transmission directly toward actualization on the physical plane."

Note: weight above is shipping weight. The actual weight of this piece is .20 oz. Each piece is unique and may vary slightly in appearance from these photos. Each piece is guaranteed to be beautiful and to meet with your complete satisfaction!!