This lovely polished pyrite heart reveals a beautiful metallic surface with a marbling pattern of silvers, golds & metallic black tones which swirl and reflect the light.

Pyrite consists of very heavy, hard, yet fragile Iron Disulfide crystals often with nickel and cobalt, usually cubic, pyritohedrons or less commonly, octahedral in shape. And it often exists in nodules, massive forms, or from fine to coarse grains. 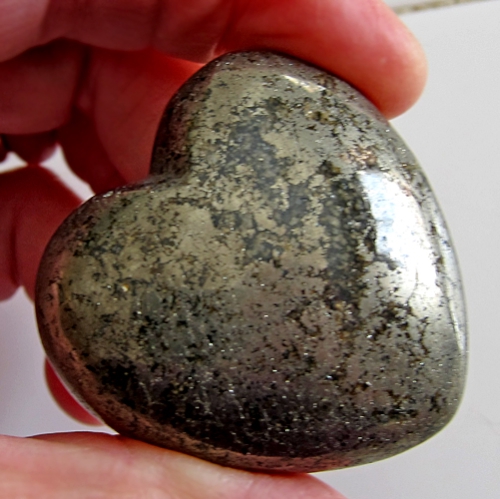 Pyrite is often found in veins of gold-bearing quartz, and is often located in plutonic, volcanic, and metamorphic rock formations.

Pyrite, also called fool's gold from the Greek pyr, so called because how easily it's mistaken for gold. In manufacturing, it's been a source for sulfur in making sulfuric acid and also iron.

According to the book, The Curious Lore of Precious Stones by George Frederick Kunz, Pyrite was used by Native American Indians for their shamanic ceremonies & made into mirrors by the ancient Mexicans.

Metaphysically, pyrite can literally shield us from energetic negative influences whether from within ourselves or from forces outside of ourselves. It is intensely grounding and due to the iron content, it should be associated with the great guardian of protection, the Archangel Michael. 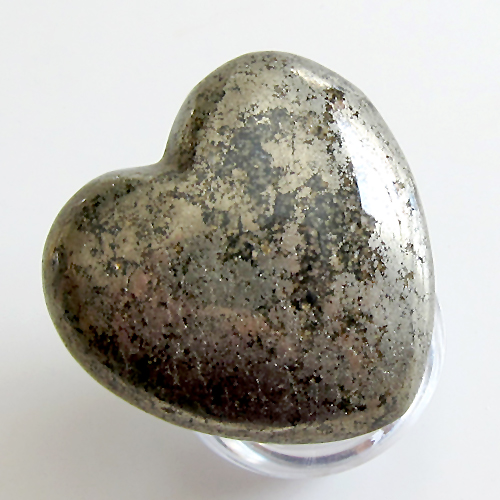 The meteoric sword of Michael was thought to cleanse the Earth’s atmosphere of sulfurous influences, allowing the Higher Self to emerge and guide the initiate along the path of Spirit toward the birth of the Inner Christ Light, an event which takes place in December, at the winter solstice just before the festival of Christmas.

Archangel Michael is the patron and protector of Lightworkers or anyone seeking protection, and is always available to help us overcome fear, doubt, and negative emotions and thought-forms from our lives.

Note: Weight above is shipping weight. Average weight is 95 grams or 3.35 oz. Each piece is unique & may vary somewhat in appearance from the photo on this page. Each piece is guaranteed to be beautiful & to meet with your complete satisfaction!