These beautiful Larimar Lovely Earrings were designed and fabricated in the Dominican Republic, the island nation where this sea-blue gemstone was discovered. They are set into a simple Sterling Silver setting with hooks for pierced ears.

These powerful Larimar earrings work to open and equilibrate the upper chakras, and empower the bearer, helping the individual get in touch with their own inner truth, and enhancing the ability to communicate that inner truth to others, on an individual basis, and through the mass media. 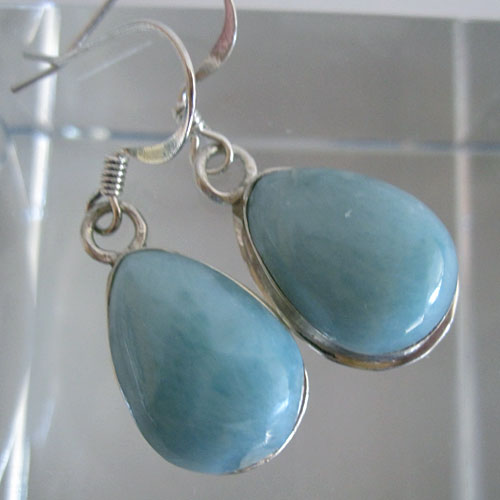 Jane and I love Larimar. Our experience with Larimar is that this gemstone is a Blessing from the Goddess, conferring comfort, nurturing energy, and providing a kind of energetic emotional rescue. Larimar has a relaxing energy signature, soothing body, mind and soul while clearing the mind and providing the kind of safe, secure, grounding energy that we all need in these difficult times.

Note: Actual weight of this pair of earrings is 6 grams.