This unique and beautiful water-clear natural Danburite 14 mm Super Nova cut pendant is crowned with a brilliant trillion cut Moldavite gemstone. The combination of Danburite and Moldavite increases the flow of Universal Life Force energy into the upper chakras, expanding the aura, while providing support for transformative change in every aspect of life. 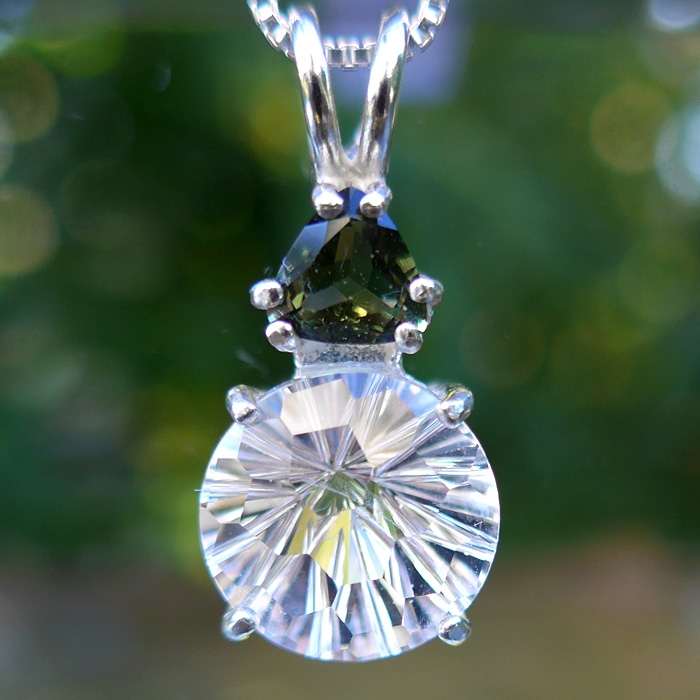 This unique and beautiful Clear Quartz Super Nova Pendant with trillion-cut Amethyst accent stone is a new cut for the 21st Century from our favorite jeweler, Paul Jensen who brought you the power cuts metaphysical tools line of jewelry which includes the Star of David, Ascension Star, Angelic Star and other Tools for Evolution Jewelry.

This remarkable Super Nova pendant combines two spectacular cuts. On the back of the clear quartz gemstone is a modified Millennium Cut, a starburst pattern that was created in the early years of the 21st Century by master jewelers to reflect the emerging consciousness of a new millennium. The surface of the clear quartz gemstone is laced with an intricate pattern of flat hexagons, like a honeycomb or the eye of a honeybee.

The compound eye of a honeybee consists of an array of hexagonal visual sensors designed to maximize the honeybee's ability to detect tiny movements in shadow and in the lower, infrared light frequencies, enabling the honeybee to achieve maximum awareness of predator movements in deep shadow and also provides amazingly acute peripheral vision.
The honeycomb is also composed of hexagonal cells, so we call this cut the honeycomb cut, and this unique cut is said to help the bearer to bring to consciousness all the information that is normally held subliminally, in the unconscious mind, or which is in the periphery of consciousness and awareness. This honeycomb cut pendant can help to render the bearer much more acutely perceptive, and to enhance the critical spiritual faculty of discernment, which is so vital to us all in today's rapidly changing, tumultuous global environment.

Danburite is a very hard stone with a Mohs' hardness of 7-7.5, comparable to sapphires, tourmalines and garnets. Danburite is most often yellowish, brown, or white, but mineral collectors prefer the more rare pink coloration.

Named after the town of Danbury, Connecticut, where this gemstone was first discovered, Danburite presents a vitreous luster, and is prized by jewelers because its extreme hardness and poverty of cleavage enables highly faceted gemstones to be cut from this precious mineral.

Pink Danburite energizes and activates the heart chakra, providing the energetic protection that gives us a feeling of emotional safety and personal power that facilitates the opening of the heart to others, loved ones, friends, family, and indeed the whole of humanity, and all of creation. This gemstone is a stone of compassion, and provides emotional healing that can mend the wounded heart. 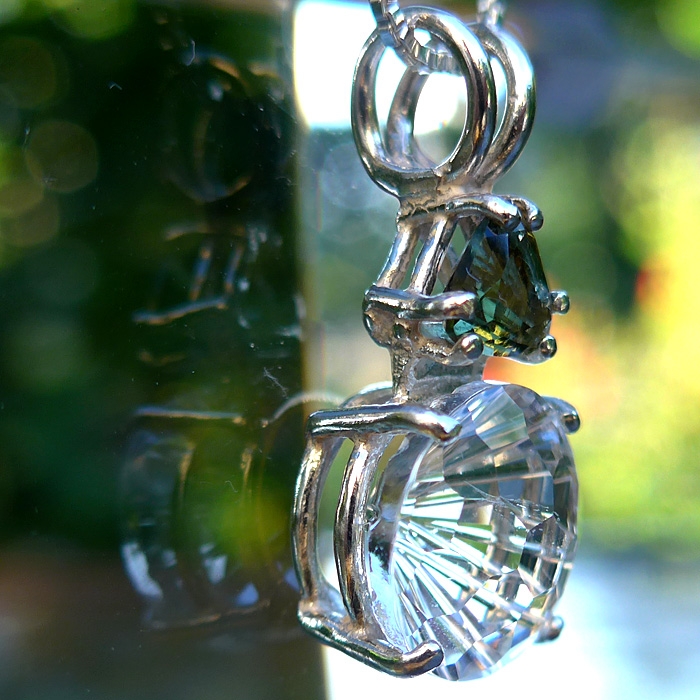 From personal experience during meditation with Danburite crystals, I can tell you that much depends upon intent. When my intent has been to quiet the mind, holding one of these crystals reduces mental chatter to virtually nothing, while stimulating the crown chakra, the third eye & the eighth chakra above the crown, creating a feeling of warmth & depth, a buzzing and a tingling on the crown of the head and between the eyebrows. There was a physical awareness of a tremendous flows of energy carried on the inbreath and outbreath from the eighth chakra and higher, spiritual sources, through these vital centers and deep into the body.

Metaphysical rockhounds and crystal healers say that moldavite activates any and all of the chakras and also opens the mind to the limitless possibilities inherent in its cosmic origins. Moldavite's energy tends to dissipate blocks throughout the energy system and then center energy in the heart, opening the heart to universal love.

We know you will use this powerful crystal pendant with loving wisdom and respect its long journey in the Earth that has lasted for many long historical cycles. This crystal is a powerful tool, a love-gift from the Divine Mother to you.

Note: Weight above is shipping weight. Actual weight is .30 oz. Each piece is unique made of natural crystals so they may vary slightly in appearance. Each piece is guaranteed to be beautiful and to meet with your complete satisfaction!