This gorgeous pale pink blush hued Danburite Mini Magician Stone pendant with its rich orange red Hessonite Garnet round accent stone has a tremendous sparkle & warm glow to it & is a very powerful piece offering protection and beauty to the one who wears it.

It is a polished & cut stone, an exceptionally clear jewel set into a sterling silver setting which allows the stone to breath and comes in a black velveteen pendant box for safe keeping. The pendant hangs on its sterling silver chain right on the thymus between the throat and the heart chakras, offering protection to the whole body resonating through the compassionate heart.

The combination of Danburite with Hessonite Garnet is considered to be very protective, helping us to clarify situations by staying connected to our Higher Selves while at the same time assist with grounding and centering. Danburite is a very hard stone with a vitreous luster. The metaphysical community prizes Danburite for its ability to connect the bearer to sources directly to sources of Higher Wisdom and to vast libraries of information located in the "akashic records". "Akasha," in Sanskrit, means "brilliant," "shining" or "luminous." "Akashic records" is a theosophical term referring to a universal library of light which records every thought, word, and action, past, present and future, and the templates for all structures and processes in the material world. These records are impressed on a subtle substance called akasha or Soniferous Ether.

Danburite is also known for its ability to help you "let your light shine", connecting you with Higher Self and Higher Purpose, while enhancing your ability to co-operate with others in group activities beneficial to all involved.

From personal experience during meditation with both Danburite and Moldavite crystals, I can tell you that much depends upon intent. When my intent has been to quiet the mind, holding one of these crystals reduces mental chatter to virtually nothing, while stimulating the crown chakra, the third eye & the eighth chakra above the crown, creating a feeling of warmth & depth, a buzzing and a tingling on the crown of the head and between the eyebrows. There was a physical awareness of a tremendous flows of energy carried on the inbreath and outbreath from the eighth chakra and higher, spiritual sources, through these vital centers and deep into the body. 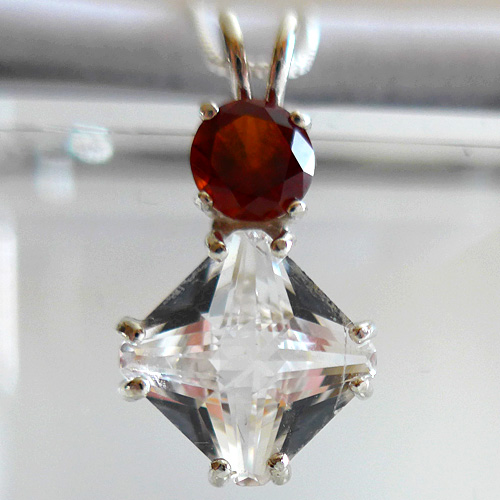 Note: Weight above is shipping weight. Actual weight is .20 oz. Each piece is unique and may vary slightly in appearance. Each piece is guaranteed to be beautiful and to meet with your complete satisfaction.