This unique and beautiful Clear Quartz Super Nova Pendant with trillion-cut Amethyst accent stone is a new cut for the 21st Century from our favorite jeweler, Paul Jensen who brought you the power cuts metaphysical tools line of jewelry which includes the Star of David, Ascension Star, Angelic Star and other Tools for Evolution Jewelry.

This remarkable Super Nova pendant combines two spectacular cuts. On the back of the clear quartz gemstone is a modified Millennium Cut, a starburst pattern that was created in the early years of the 21st Century by master jewelers to reflect the emerging consciousness of a new millennium. The surface of the clear quartz gemstone is laced with an intricate pattern of flat hexagons, like a honeycomb or the eye of a honeybee. The compound eye of a honeybee consists of an array of hexagonal visual sensors designed to maximize the honeybee's ability to detect tiny movements in shadow and in the lower, infrared light frequencies, enabling the honeybee to achieve maximum awareness of predator movements in deep shadow and also provides amazingly acute peripheral vision. 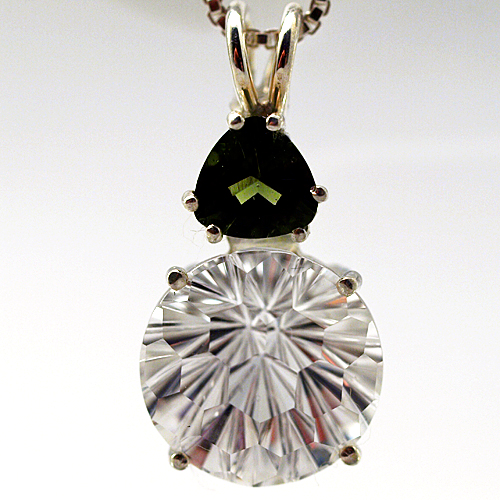 If you want change in your life, Moldavite combined with clear quartz can expedite that change, connecting you to Source & your own Divinity. Moldavite is a rare bottle-green translucent stone of unearthly origins. Scientists postulate that a meteor shower in the Moldau Valley of Czechoslovakia some 15-20 million years ago caused extra-terrestrial material to fuse with earthly rock formations at very high heat, forming fused glass -- the only moldavite known to exist.

As the melted rock traveled at high speed through the upper atmosphere, the super-heated material was shaped into a variety of unusual formations typical of splash patterns found in liquids: spherical, oval, drop, dumbbell, elliptical, rodlike or spiral. The rarest of moldavites resemble intricate opened flowers. Scientists are unsure about the exact origins or composition of moldavite. It is not considered to be a member of the mineral family and displays unusual characteristics. It is classed as a mineraloid gemstone, a member of the tektite family, with no classifiable crystal structure. Moldavite's chemistry is unique and as yet unexplained.

Moldavites are the rarest of gems, perhaps more rare than diamonds, rubies or emeralds. Moldavites have been prized for over 25,000 years, since archaeologists have discovered moldavite shards and pieces in cave dwellings of that era. In his book Moldavites: The Czech Tektites, Professor Vladimir Bouska states that "The first human being that was interested in Moldavites was a Cro-Magnon man from the aurignacian age, i.e., the Upper Paleolithic. Several potsherds [fragments] of green Moldavite glass were found together with the famous statue of Venus of Willendorf, which is about 29,000 years old, at Willendorf in Lower Austria."

If you want change in your life, Moldavite combined with clear quartz can expedite that change, connecting you to Source & your own Divinity. From personal experience during meditation with Moldavite and clear quartz crystals, I can tell you that much depends upon intent. When my intent has been to quiet the mind, holding one of these crystals reduces mental chatter to virtually nothing, while stimulating the crown chakra, the third eye & the eighth chakra above the crown, creating a feeling of warmth & depth, a buzzing and a tingling on the crown of the head and between the eyebrows. There was a physical awareness of a tremendous flows of energy carried on the inbreath and outbreath from the eighth chakra and higher, spiritual sources, through these vital centers and deep into the body.

Concentration on the inner light, and inner meditative visualizations were greatly enhanced, and the ability to connect to inner spiritual guidance, Guides and Teachers increased markedly. You can read more about crystals in our article "Using Quartz Crystals in Digital Technology, Healing and Meditation" or you can read about Marcel Vogel and crystal healing in that article.

Note: Weight above is shipping weight. Net weight of this pendant is .20 oz. Each piece is unique and may vary slightly in appearance. Each piece is guaranteed to be beautiful and to meet with your complete satisfaction!