This stunning pair of 14 mm Super Nova Clear Quartz Hanging Earrings is of exceptional quality, both in the cut of the stones and in the simple sterling silver settings which allow the stones to breathe and function at their highest vibration. Both the setting & the wire hangers on these earrings are made of sterling silver and they come in a velveteen jewelry box for their safe keeping.

This new stone cut by Paul Jensen of Tools of Evolution line of sacred geometry power cut jewelry originally had no name when we first saw them as pendants. They've been aptly named Super Nova, which describes the radiant energy signature of this complex cut.

On the back of each Clear Quartz Earring is a modified Millennium Cut, a starburst pattern that was created in the early years of the 21st Century by master jewelers to reflect the emerging consciousness of a new millennium.

The surface of the gemstone is laced with an intricate pattern of flat hexagons, like a honeycomb or the eye of a honeybee. The compound eye of a honeybee consists of an array of hexagonal visual sensors designed to maximize the honeybee's ability to detect tiny movements in shadow and in the lower, infrared light frequencies, enabling the honeybee to achieve maximum awareness of predator movements in deep shadow and also provides amazingly acute peripheral vision.

The honeycomb is also composed of hexagonal cells, so we call this Super Nova cut the honeycomb cut, and this unique cut is said to help the bearer to bring to consciousness all the information that is normally held subliminally, in the unconscious mind, or which is in the periphery of consciousness and awareness. These Super Nova cut earrings can help to render the bearer much more acutely perceptive, and to enhance the critical spiritual faculty of discernment, which is so vital to us all in today's rapidly changing, tumultuous global environment.

See closeup below of the stone to notice this honeycomb effect. 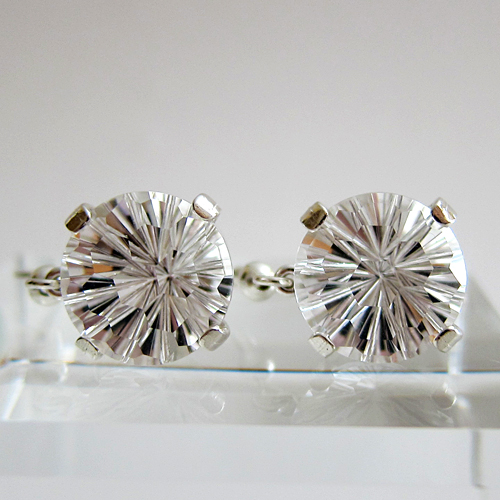 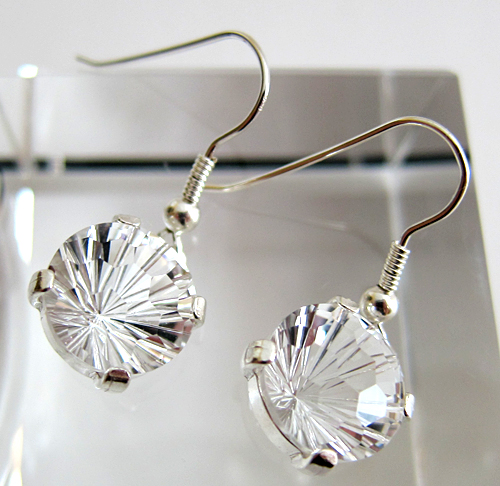 These Super Novas have substantial gemological and metaphysical value, have incredible light shining through the violet ray & sparkle! Wear these lovelies to light up your days & nights!