The Radiant Heart pendant is a powerful design from the creators of the Flower of Life and Magician Stone pendants, who call it an "evolutionary tool to assist us in expanding our ability to hold and create Unconditional Love, so that we too may 'crystallize' the wisdom of the One Heart that unites all life in Love." See other views on this page, side view is below right.

It is set into a sterling silver setting which allows the stone to breath, and hangs on its sterling silver chain right on the thymus between the throat and the heart chakras, offering protection to the whole body resonating through the compassionate heart. 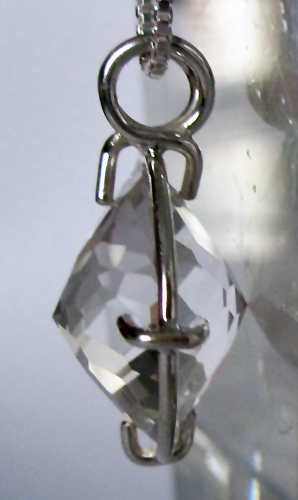 Quartz crystals have this marvelous ability because, metaphysically, quartz crystal expresses the unity of the five elements (Earth,Air, Fire, Water, and Ether or Spirit). Crystals grow deep in the earth and form much of the earth's crust, yet crystals, like the element air, allow light to pass through them. Crystals are fiery in that they have piezoelectric properties yet they are watery in their hexagonal molecular structure which resembles snowflakes, and in their ice-like appearance. Crystals are quintessential expressions of the element of Ether or Spirit, which is synonymous with Universal Life Force Energy, the fundamental energy that sustains all forms of energy in the known universe. 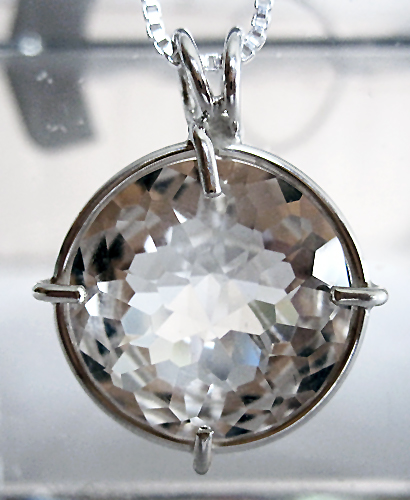 Note: Weight above is shipping weight. Actual weight of this pendant is .25 oz.