This beautiful untreated, natural clear quartz crystal Mini Magician Stone pendant is crowned with a large, brilliant round Peridot gemstone. Peridot is a gem-quality stone when all inclusions have been removed, as in this gorgeous specimen. 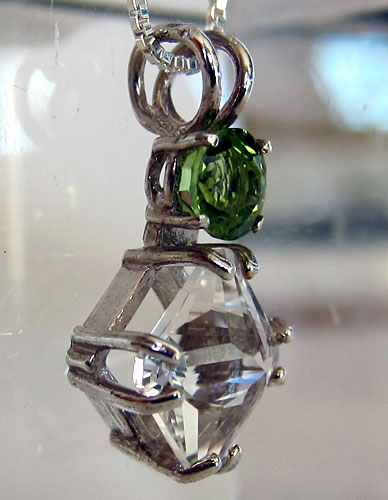 Mineralogical and Metaphysical Properties of Peridot

Peridot is said to have been one of the stones found in the breastplate of the High Priest of Israel, as described in the Old Testament. 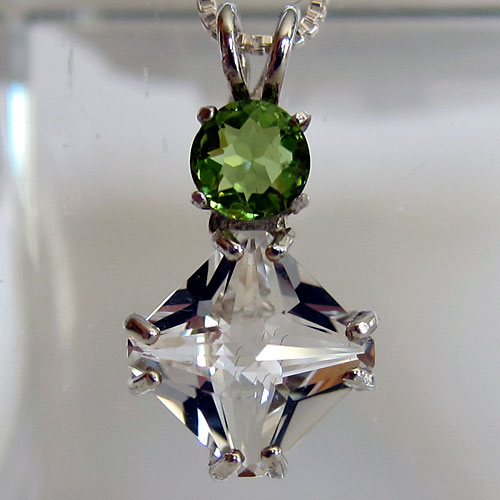 Peridot is said to stimulate the heart and solar plexus chakras, bringing the activities of the mind into harmony with affairs of the heart. Peridot helps the bearer to an intellectual understanding of relationships, and to regulate the physical, mental, and emotional cycles surfacing in each stage of the life path.

Crystal healers often use peridot to tonify, energize and strengthen the physical body, which makes sense given its close association with the solar plexus and heart. For the same reason, peridot is used in the treatment of disorders of the lungs, heart, spleen and digestive tract.

ou can read more about crystals in our article "Using Quartz Crystals in Digital Technology, Healing and Meditation"or you can read about Marcel Vogel and crystal healing in our Vogel Archives along with edited chapters of his unpublished book, given to Satya Center from Marcel Vogel's family.

Note: Weight above is shipping weight. Net weight of this pendant is .2 oz. Each piece is unique and may vary slightly in appearance from the photos on this page. Each piece is guaranteed to be beautiful and to meet with your complete satisfaction!!