This stunning one of a kind crystal lamp, weighing 31.25 pounds, and measuring 14.75 inches high, is a practical way to literally illuminate your home, office or treatment room. This magnificent Giant Clear Quartz Flame rests atop a Giant Rose Quartz Base which has been hollowed out enough to fit the top stone with decorative Blue Green Fluorite from China on top & a lamp inside of it. 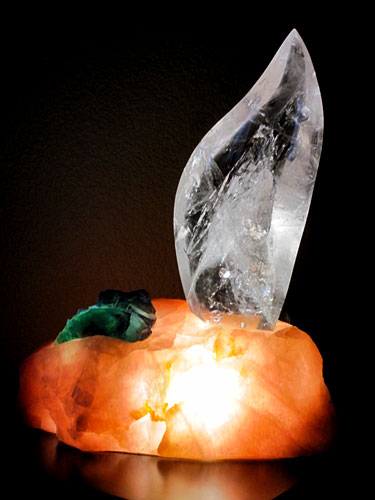 This piece has an easy to use on off switch a bit away from the crystals and uses a long life eco bulb inside so that it doesn't have to be changed very often at all. It is easy to change when the bulb is spent. It has a beautiful appearance both lit and unlit, on or off & sends out a glow both ways. Scroll down the page to view many more views of this treasure taken from different angles.

This piece has such powerful amplification of the nascent metaphysical healing properties within both stones that it can accomplish a great deal of clearing in a short time and in a fairly enormous space.

Clients have reported that home conditions harmonized almost instantly, as soon as the lamp was unpacked & set up. It can create harmony in your living space where there is tension and very gently ease & clear the space, and assisting in setting up protective boundaries. Any work you do in this fashion employing this lamp will be greatly accelerated, amplified & supported.

This piece blasts out a tremendous healing & clarifying energy field which can fill up a very large space, or several rooms at once. Scroll down to see shots with the lamp both lit & unlit. It was a bit difficult to capture when lighted, due to the automatic exposure which tends to overexpose this piece while the lamp is lighted. 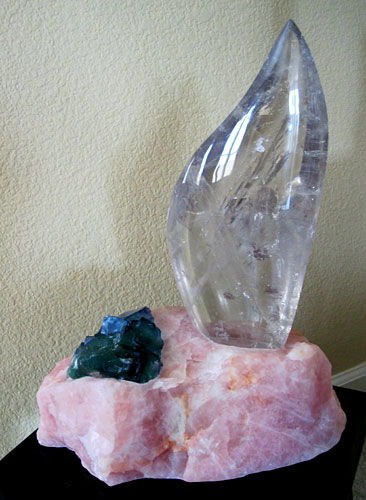 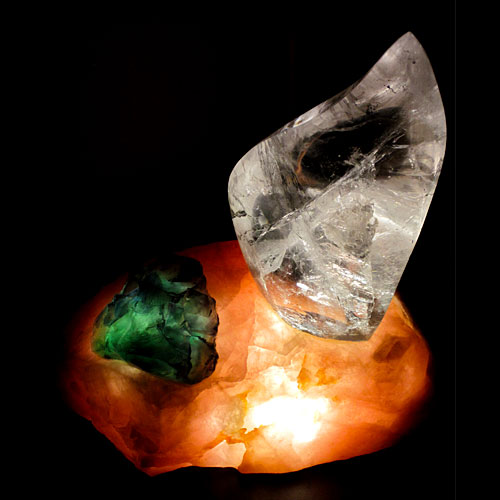 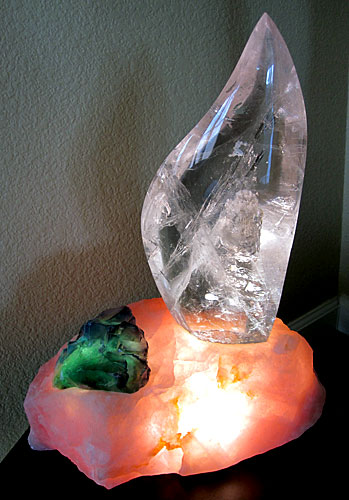 Rose quartz projects a soft, soothing, gentle energy that resonates with vibrations of love, and is especially supportive in cases where an individual is developing the capacity for self love. It sends out an energy of unconditional love, as compared with passionate love, so the energy of rose quartz resonates with the heart chakra rather than the lower chakras. 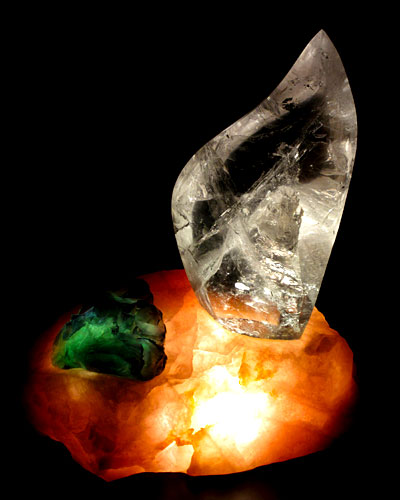 This is a gently healing stone, allowing for the slow opening of the heart to healing and loving energies. It supports the wearer or bearer of this stone in all spiritual practices and daily activities that promote the development of compassion for all beings -- and especially for oneself.

Fluorite, or Calcium Fluoride, is a relatively soft, translucent, richly colored mineral, which is highly fluorescent, and displays a strong blue-violet color under a black light.

Fluorite often occurs in glassy bands found in a variety of mineral environements. Fluorite is commonly found in metallic hydrothermal deposits associated with lead, silver, galena, sphalerite, or cobalt deposits. Fluorite is often found in hydro-thermal deposits such as areas with hot springs, where porous limestone has been infused with aqueous fluoride.

Fluorite is said by crystal healers to enhance our powers of discernment, and help us reach a balance in relationships. All colors of fluorite are effective for clearing the aura and energy centers and can facilitate a deep state of meditation.

Note: weight above is shipping weight. Actual weight is 31.25 pounds.