This lovely pair of Angel Aura Quartz Radiant Heart Hanging Earrings are irridescent and full of sparkling light! They come in a lovely sterling silver basket setting hanging from hooks for pierced ears and will light up your whole appearance! You will receive them in a lovely velveteen earring box for safe keeping. These earrings are much prettier than the photographs. Their irridescence is just stunning to behold! 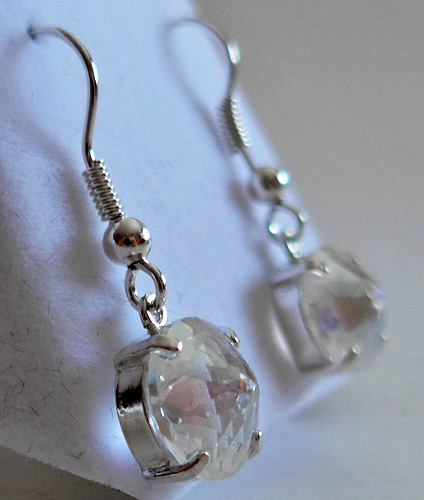 These Radiant Heart earrings are set into a sterling silver setting which allows the stones to breathe and come in their own velvet jewelry box.

Angel Aura quartz is a form of laboratory enhanced quartz crystal that is extremely tough, durable, and beautiful.

Clear Quartz crystal that has been selected for its structural integrity is subjected to stress tests and then introduced into a vacuum chamber. Platinum and/or silver is vaporized within the chamber at extremely high heat, and the gaseous metals adhere to the surface of the quartz crystal, creating an iridescence that is unique and extremely beautiful, exhibiting pale pink, blue and lavender flashes of color that are quite unlike anything seen in naturally occurring minerals and quartz crystals. Only crystals with strong structural integrity can withstand the process. Crystals with inclusions or other structural flaws can literally explode during the treatment. 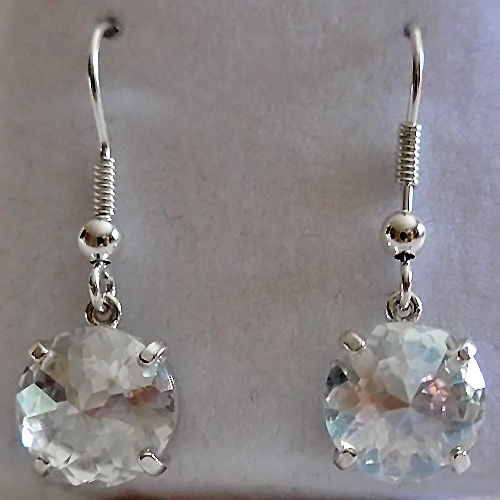 Quartz crystals have this marvelous ability because, metaphysically, quartz crystal expresses the unity of the five elements (Earth,Air, Fire, Water, and Ether or Spirit). Crystals grow deep in the earth and form much of the earth's crust, yet crystals, like the element air, allow light to pass through them. Crystals are fiery in that they have piezoelectric properties yet they are watery in their hexagonal molecular structure which resembles snowflakes, and in their ice-like appearance.

Note: Actual weight of earrings is 3.3 grams for the pair.