This beautiful deep violet Amethyst Mini Magician Stone crystal pendant is crowned with a large, round pink hued Danburite gemstone of exceptional quality, both in the style of the stone and in the simple silver band setting which allows the stone to breathe and function at its highest vibration.

The combination of amethyst and danburite makes for a splendid Higher Worlds access and should increase ones ability to communicate through the spiritual heart.

The Vogel-style Mini-Magician Stone pendant is cut according to principles of sacred geometry so that a star exhibiting four-fold symmetry appears within it. One can see other stars refracted within the star as well. 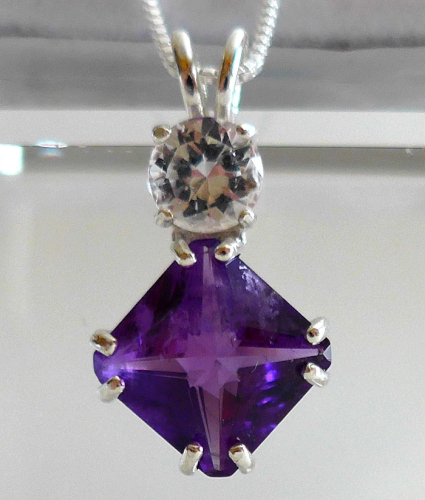 Danburite is a very hard stone with a Mohs' hardness of 7-7.5, comparable to sapphires, tourmalines and garnets. Danburite is most often yellowish, brown, or white, but mineral collectors prefer the more rare pink coloration. Named after the town of Danbury, Connecticut, where this gemstone was first discovered, Danburite presents a vitreous luster, and is prized by jewelers because its extreme hardness and poverty of cleavage enables highly faceted gemstones to be cut from this precious mineral.

Danburite energizes and activates the heart chakra, providing the energetic protection that gives us a feeling of emotional safety and personal power that facilitates the opening of the heart to others, loved ones, friends, family, and indeed the whole of humanity, and all of creation. This gemstone is a stone of compassion, and provides emotional healing that can mend the wounded heart. 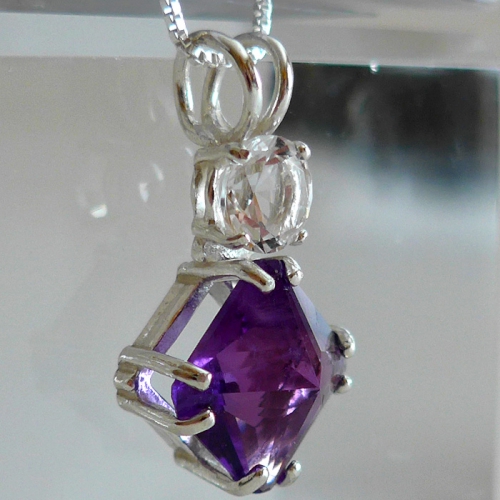 Note: Weight above is shipping weight. Average actual weight is 4.8 grams. Each piece is unique made of natural stones and may vary slightly in appearance and dimensions. Each piece is guaranteed to be beautiful and to meet with your complete satisfaction!