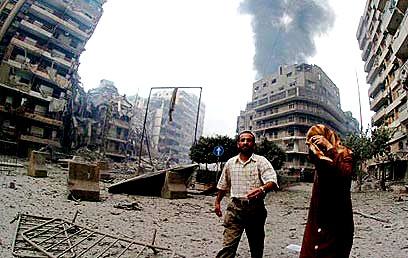 The compact gallery of color
shots captures my eyes as I
peel the blue plastic off
The New York Times. I bear
this light weekday sheaf
across the porch toward the kitchen,
where I sit, stare at paper, sip tea -
there, two crying men, on sand
beside the canal where bombs
left children drifting. One man
looks like my Uncle Herbie did
years ago, before he died
of Lou Gehrig's Disease. And that
kid, crying in his mother's arms,
face flecked with black and red,
the marks and colors of attack -
they've fled their blasted
Beirut neighborhood - his dark
flooded eyes could be my own
first-born's when he was five,
when he wailed as we pulled away
from his favorite river, as if
his life were over - I saw
his torment in the rear-view mirror.
But we were going home. The boy
on the front page maybe
just saw his house destroyed, or
lost his father forever. And there,
next to these are framed a few
Israelis, in terror as rockets
enter Haifa from the sky
and shred their frail sense of safety -
I see it in their eyes. One woman
stares, like my Aunt Dorothy
after she lost Herbie, when
she couldn't cry. Familiar
faces - these distant
relatives could be sitting with me
here in the kitchen, also
looking at the paper over tea, but they
are there, staring through the paper
window, crying out to me.