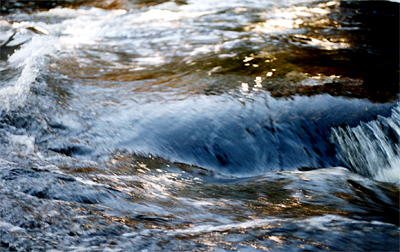 She must have dozed. For a moment
disoriented, unaware of how
she’d come to be floating.

Heading downstream, occasionally
the warm water would cascade
over her face and eyes.

Sunlight became liquid, and she
felt it reaching into her ears,
her lips. She knew the molecules

of water and the molecules
of her body were running together.
No longer her being carried by

the stream, she was the stream,
and the sun’s photons were tiny
explosions of feeling.

She became conscious of deep vibration,
a roar, and of moving more rapidly.
Her liquid body

shot over the lip
of a waterfall and off into space.
She broke into thousands of droplets,

each a point of ecstasy.
It was as though she were a sigh
of pleasure as she spread

into mist. Then something moved
through her. At millions
of intersections she assembled

a description, a form with two
leading edges, pointed center and
bulbous shape behind, with a forked

plane playing the turbulence: a swallow
was flying through her!
She experienced a loving the universe finds

in the swallow’s existence, the way
its sensual form becomes intimate
with damp air. Then

she felt water on her wings.

[Reprinted with the kind permission of James Bertolino. Originally Published in Context Magazine in 1990]

James Bertolino's poetry has been published in magazines, books, and anthologies internationally for almost 40 years, from "Drool" published in 1968 to his most recent, "Pocket Animals: 60 Poems" published in 2002 by Egress Studio Press. Check out his website to purchase his publications through Egress Studio Press and for more information and free beautiful poetry greeting cards that you can copy & print directly from his website. Read other poems James has kindly allowed us to print at Satya Center in the James Bertolino Archive.

(Photo of Buttermilk Falls in the NY State Adirondack Mountains is by Jane Sherry and the photo of James, courtesy of the poet. All poems reprinted here with the kind permission of James Bertolino.)