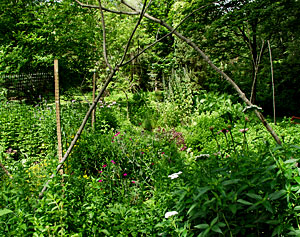 Late last summer in 2003, we doubled the size of the garden so that I could grow more of our favorite herbs for teas and tinctures and also so that we could have more sun on the garden. We used town compost to build up the bed, once again using a no till method of compost over wet cardboard & newspapers and planting straight into the compost; then we applied several of the biodynamic preparations many times over the course of the autumn, winter, spring and summer.

And how well we have been rewarded this summer! We have an abundance of marigolds, flowering thyme and chamomile blooming in their beds, and decorative pink yarrow from my neighbor Kathy heralding the entrance to the new garden! The peppermint has gone wild, as I had hoped it would. The new side hyssop border has rewarded us with a profusion of bright purple blossoms to contrast with the pale orchid color of the anise hyssop flowers running down the main path. The bright yellow heliopsis sits in the center of the two beds now, sparkling amidst the violets, lavenders & purples of the hyssops, and the hot pinks of the neighboring Echinacea, with their bright shimmering orange centers. 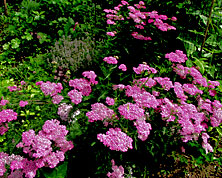 The succulent purslane has acted as a champion ground cover, helping absorb the ever copious rains we’ve had all spring. We couldn’t possibly eat all the purslane, as much as we add them to salads. The elegant blue flowered spiderwort have become so thick, the path they border is obscured, contrasting with the lacy volunteer pink cosmos that reseeded themselves from last season, the thick stand of Echinacea and my prize Hansa Rugosa Rosebush, which now sets out its giant green hips, emanating a rosy blush.

I have decided through choice and circumstance this year to leave many of my weeds in place, as an offering to the wildlife, giving the deer and rabbits something to eat besides my plantings. The back of the garden and beyond has been left entirely wild. Conversing with the nature spirits of the yard, I was ‘told’ to leave the north western edge of the garden to it’s own devices. Occasionally I am ‘allowed’ to venture inside there to harvest small amounts of medicinal ingredients, like the angelica seeds which this year are available from flowers on its giant 6 foot tall spire. Angelica is a biennial flower which means it sends its tall flower stalk up only in the second year of growth. 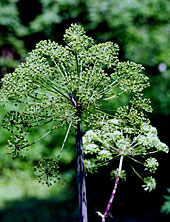 Because we have left so much wild this year, the deer and rabbits haven’t wiped anything out. They did eat the hollyhocks so steadily that they are only half their height this year, but flowering nonetheless. They also ate my new rosebushes, although saved us one new pink bloom which we treasured. I did get a bit nervous at one point this spring, and had a good long talk with the creatures, asking them to eat the Joe Pye weed in the back plot which they love so much, telling them they could eat all of the lilies as they did in previous years, & encouraging them to eat the copious stands of jewel weed, comfrey, and violets instead of my lettuces, Echinacea & roses.

The deer ate several plantings of my beans, and so, adhering to my laissez-faire philosophy only up to a point, I erected mini fences enclosing plots of beans & peas throughout the garden so I would be sure to have an abundant harvest of my favorite summer treats. Peppered into those plots are volunteer tomatoes, turnips & purple shiso as well as plantings of delicata squash in one and bronze fennel in another and a wild aster stand 5 feet tall in the third fenced-in plot.

The wild creatures did go for the Joe Pye weed, ate some comfrey, and tons of jewel weed, which of course came back anyway, and now graces us with its lovely orchid blooms. All in all, we seem to have struck some sort of balance with the deer and rabbits so we each have enough of what we want! Next year, I will have to speak with them again, about those new rosebushes. 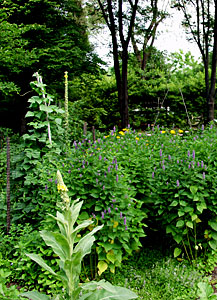 Just this morning, Curtis and I wandered out to harvest some peas and saw a doe with three beautiful spotted fawns, hovering on the edge of the garden. Such grace and beauty! Of course, one of the little ones did venture inside the garden to try some of the lilies instead of eating them from the outer bed. Mom tried to herd them all back into the little wetlands behind our yard, but this one gawky fawn insisted on staying in the garden. And the weeds, flowers and stands of herbs are so tall in the garden, that he was totally hidden until I walked near him and he leaped out again.

At the same time, we saw our first hummingbird of the season drinking nectar out of some jewelweed flowers. Happiness! The hummingbirds have returned, after an enforced absence of several seasons since they sprayed the chemical Anvil on all of our properties a few years back in response to the West Nile virus scare. I covered our garden each time they sprayed that summer, but I couldn’t control the garden eco-system sufficiently to prevent unwanted alterations in the balance of our little local garden’s web of life. Hummingbird, frog and bat populations were all greatly reduced. So I take the hummingbird’s return as a sign that the garden is recovering its balance now!

All in all, we are so blessed to have this garden partnership with the neighboring wetlands and its inhabitants and with the nature spirits connected to our little cultivated plot, combining nature and nurture in harmonious balance. We treasure our classes in this gorgeous mosaic of life, unfolding in earth, air and water, our living schoolroom. This garden is also our cathedral, where we pause to reflect upon the inter-relations between earthly life and spiritual realms, and to continuously express our gratitude for the abundance of beauty in our lives. Through these interactions, reflections and prayers, we hope to learn to live a little more in harmony with the local web of life, and thus with the greater world beyond the borders of our little suburban garden sphere. 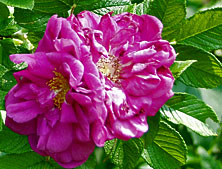