In the Autumn of 1994 a Spiritual Pilgrimage to Peru and Bolivia was embarked upon. Present in this group were myself and Daniel Giamario, Shamanic Astrologer and group co-leader, as well as Alan Leon, organizer of the Peruvian end of things, and a traveling group of about 20 pilgrims. 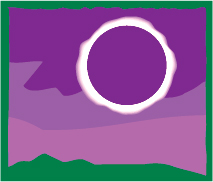 We had come to South America to bear witness to a total eclipse of the Sun, which was to occur on November 2nd, 1994, in Bolivia. Along the way our plans included visits to the many Sacred Sites which this region has to offer.

Flying into Lima, Peru we put up for the night at the Bolivar Hotel in downtown Lima. This historic and grand hotel is named after Simon Bolivar, the George Washington of Bolivia. An evening walk in the central Plaza brought an inundation of the senses from the sights and scents of the Market- Inkan weavings, native foods, and the colorful dress of the people themselves.

The next morning we departed upon a flight to the fabled Cuzco, capital of the Inkan empire. The awesomeness of the snow capped mountains was rivaled only by the lush green valleys and gorges which lay beneath us. Landing in Cuzco we were greeted by the local officials who handed us each a cup of hot coca tea, a local Andean herb which helps the body to assimilate oxygen better, and therefore combats the effects of the altitude. Checking into a hotel, we set out to explore the city. Massive stone blocks, black and shiny with the patina of the centuries formed the walls of temples and fortresses built by the ancestors of the still proud Inkan inhabitants of modern day Cuzco. Narrow alleys, walkways and streets crisscrossed each other, and everywhere the hustle and bustle of a people busy with their own lives. Vendors of every conceivable item hawked their wares from stalls and blankets spread upon the sidewalks. Carved gourds, jewelry and textiles, hats, alpaca mittens and sweaters, it was all available. Alan directed us to his 'family', who made alpaca sweaters to order- for $20! The senses were on overwhelm once again from the multitude of another culture's daily expression.

Cuzco itself is a city the size of San Francisco, built of rock and adobe, looking a lot like Santa Fe, and sits at 11,500 feet elevation, in a valley surrounded by majestic peaks which tower to 22,000 feet overhead. Each mountain is regarded as a deity, the embodiment of the Sacred. That evening we gathered in a brick oven-fired pizza house (pizza is big in Peru). After dinner some of us went to a local club and listened to a live band, "Los Cheroqs". The music, a blend of traditional Peruvian flute, pan pipes and drum, a twelve string acoustic guitar riffing rock rhythms, was dynamite.

Awakening to a new day, shopping in the markets for breakfast and heading off to the train station began the next leg of our trip. The train pulled out and began to move up the mountainside. All of a sudden the train stops and then begins to move backwards! Confusion reigned amongst us until we were informed that the train had pulled off onto a spur, the tracks were switched and we were now proceeding up the next length of track up the mountain, traveling in a zig-zag manner up to the pass! A full days travel brought us to Urubamba, known as the Sacred Valley.

Staying at a hotel which is part of an orphanage, it is also a temple dedicated to the Mother. Beautiful flower gardens were laid out in a pleasant array for strolling. Some went to a local cafe and were served up strawberry chicha. Chicha is a mild corn beer found throughout Peru. The strawberry fruit variety is a specialty of Urubamba, and amongst beer connoisseurs of the world this particular strawberry chicha is considered a world class 'must' in one's lifetime experience. (I heard this on a PBS program some months after the trip.) Others of us took a van to Ollantaytambo. Aiee! Ollantaytambo! This temple is constructed of huge blocks of stone weighing tens of tons each, and were somehow transported from an unknown region up the mountainside to build this complex. Sometimes referred to as the 'Landing Place of the Gods', its splendor still to this day resonates through my being. While there upon the temple, in the plaza below, suddenly a multitude of Inkans of many mountain villages swelled the courtyard. Each dressed in the garb of their particular village, dancing their traditional dances to their village's unique music, theatrical portrayals of the ancient Myths and rites of passage were enacted. We had somehow been fortunate enough to arrive on the region's Festival day!

By train we continued down the Urubamba Valley and into the Upper Amazonian jungle, arriving in the afternoon at Aguas Calientes, staying at Gringo Bill's hotel. The night and next morning were spent soaking in the hot springs which gives the town its name. By bus we went a short ride up the mountainside to Machu Picchu. How to describe Machu Picchu? Easier it would be to tell of Heaven. Sitting atop a pinnacle of mountain overlooking the valley 2,000 feet below, an elaborate city/temple built of stone works impossible to engineer even with today's technology, explodes one's conceptions of ancient humanity's capabilities.
Kucho, the Inkan apprentice of the Shaman of Machu Picchu, Clemente Quispe, and personal friend of Alan's, was our guide the next two days. His intimate relationship with the goings-on of that Sacred Site provided an intimate experience of Machu Picchu not available to a regular tour group. On the second day within the complex of temples and initiatory sites, October 26, 1994, it was discovered that this very day was the day on which the sun was to be at zenith over Machu Picchu! We all gathered at the Inti Stone (or Sun Stone, as it is known), to bear witness to this auspicious event. Here begins an experience in my life so phenomenal as to be world shaking in its import.

As we gathered around this most holy of altars in Peru, I saw that Kucho was holding his Condor feather, wrapped in red cloth, in his hands, waiting for some tourists to clear the area. When the tour group had left, I indicated the Condor bundle with a nod of my head and asked Kucho if I might place it on the altar for him. He assented. As I placed the feather upon the Inti Stone, he nodded to my Eagle Staff that I carried, and indicated that I should place it, as well, upon the altar. What an honor! 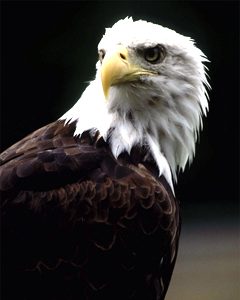 I delicately placed the Eagle Staff, to which were tied four eagle plumes given to me by Sundancers from the Reservation back in Colorado, next to the Condor feather. We stood in quiet alignment with the cosmic moment which was upon us. As the Sun was directly overhead, so that no shadow was cast anywhere, a wind whipped through. As it burst upon us, it lifted one of the four eagle feathers from the Staff and pulled it out! The feather drifted to the ground as the wind, just as suddenly as it had aroused, settled. Stunned, I gaped eyes widened at what had just transpired. That feather was no longer part of my Caretakership! I bent to pick it up. As my fingers touched it the visage of Clemente Quispe was presented in my Heart's Eye. I knew then that this eagle feather was to go to the Old Man of Machu Picchu. I walked over to Kucho and told him of the Vision. He had witnessed what had just happened, and a broad smile came to his face. He received the feather and carried it over to his Mentor, who stood some ways off on the other side of the altar. Kucho approached Quispe and could be seen indicating to the Old Man what had just happened, making motions with his hands to point myself out to Him: a sweep of his hands across forehead to indicate my red headband, his two closed hands pulling down from his chin to simulate my long braided mustaches.

The Old Man approached our gathering, laughing and waving the eagle feather up to the Sun. He went around the circle shaking hands with each and every one. Coming up to me, Clemente shook my hand, bowed slightly then put his two hands upon my shoulders. I responded in like kind. Simultaneously we bent our heads to each other till our foreheads met. Clasped in this embrace of mutual acknowledgement a burst of golden light flowed between us, melding us as one. Eagle poured forth from my being into his as Condor flew from Quispe into my own essence. How long we stood in this embrace of Spirits I do not know, timeless as it was, though the members of the group in attendance report that it was 30 to 45 minutes. As a flock of birds all turn and wheel as one, so did he and I release our embrace in a singularity of movement. A nod, hands to hearts in the Shaman's greeting/blessing, as one might shake hands elsewhere, we both smiled hugely, knowing what had just transpired. Clemente Quispe, speaking only Quecha, spoke to us through Kucho, as interpreter. And Kucho, in Spanish, spoke that others could translate into English. And this is what the Old Man of Machu Picchu had to say: "We Inkan people have a prophecy that when the Eagle of the North joins with the Condor of the South when the Inti Stone casts no shadow, then is the time to reveal the Teachings held secret by the Inkas for the last 500 years. The prophecy is now fulfilled!"

The enormity of this pronouncement left me stunned. To have been the bit player in the unfoldment of an ancient prophecy was humbling. It was not I, however, who is the Eagle of the North, but We, the People of the Eagle. A Mythic Drama had just unveiled itself through the actors upon the stage. Clemente Quispe insisted that I return to Machu Picchu again. "Definitely, I will." I responded. That moment to return has come. In October and November of this year a new Pilgrimage is to return to the site of this magical mystery, with even more adventures to come... 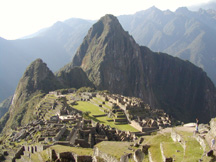 To view more information on these opportunities please visit the web site of Alan Leon, Sacred Heritage Tours, our Peru coordinator who has created with such love and joy the logistics of this adventure and shares with us his personal and intimate association with the families, Shamans and healers of Peru and the Amazon.

If you have questions, please contact me at:
JadeWahoo@Shamanic.net

This article was reprinted with Jade's kind permission.

Neoarchaic Ecstatic Shamanic Techniques with Jade Wah'oo Grigori, Caretaker of the Ways, help you to redream your life and rediscover the sacred within you. Jade runs wilderness camps for drum making, sacred warrior awakening, men's empowerment, shamanic dreaming, shamanic trainings, soul retrievals, spiritual parasite removal, story telling, private healings and much more. Check out his website for his calendar, to see when he'll be in your area, and to schedule a session. For more info send an email to Jade.

Check out Jade's website to find out when he is giving his workshops on Assisting Spirits in Transition.