I have the great fortune to see Dr. Yeshi Dhonden for my annual checkup again this year. Dr. Dhonden, a Buddhist monk, was the Dalai Lama’s personal physician for many years, and was the subject of a Dateline NBC program on Tibetan medicine which focused on Tibetan medicine’s amazing track record of curing cancer patients without surgery, using Tibetan herbal medicines and diet. 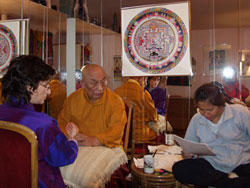 Curtis and I first heard about Tibetan medicine by accident years ago when we rented a film from our local video store on the upper west side, called “The Knowledge of Healing”. We were impressed with the success that Tibetan medicine has had in healing so called “hopeless” cases for which western medicine had no cure. We were alsoimpressed by the ancient Tibetan medical tradition, which is a holistic tradition of energy medicine, incorporating physical, emotional, mental and spiritual healing.

At that time, we were both suffering from parasite depredation and mold allergy. Western medicine had not helped, even after many months and the ingestion of an array of Western pharmaceutical therapies. I finally used an herbal formula an herbalist in the east village had given me years before, to get rid of the parasites. It worked, but further compromised our health, already weakened by the parasites.

Friends of ours are practicing Buddhists, and by coincidence told us about the waiting list for Dr. Dhonden. And by coincidence, an appointment opened up for both of us. 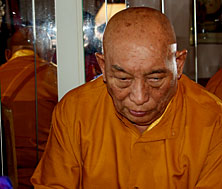 As we waited to see Dr. Dhonden, I recalled that a week before our appointments I dreamed of seeing Dr. Dhonden and was filled with a sense of well being and peace of mind. Synchronistically, Curtis also had a healing dream about Dr. Dhonden the same week.

When it was my turn to see Dr. Dhonden, my heart was pounding in nervous excitement because I was getting to meet this holy man who was such a dedicated physician. It was overwhelming to me that he was going to be my doctor.

I drifted down the stairway, past unseen Tibetan prayer wheels. And then, there he was, resplendent in his saffron and scarlet robes, sitting under a potted palm tree.

Dr. Dhonden has always struck me right from that first moment to be a mountain. Dr. Dhonden is a short bull of a man with his shaved monk’s head, a large face and gentle hands with an energy that is so grounding and reassuring. Just being in his presence always feels healing to me.

That first day, that room too, seemed thick with energy. An earthy perfume filled the room adding to the feeling of energy.

I sat down in a chair facing Dr. Dhonden, seated knee to knee with a big cushion between us to support my wrists. Dr. Dhonden took hold of my wrists,and prepared to listen to my pulses.

The translator that first year was an attractive blonde from California which for some reason, being a New Yorker, somehow further contributed to the east meets west feeling that I had.

That first time at Dr. Dhonden’s I remember being nervous telling my problems to this ‘surfer dude’, because in addition to digestive related parasite complaints, I was also trying to get pregnant. 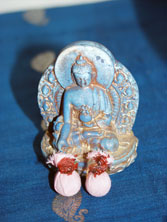 The American translator repeated my story to Dr. Dhonden as he listened to my pulses. Then Dr. Dhonden went out of the room where he examined the urine I brought, and then he came back in and listened again to my pulses.

There are six pulses in each arm. Dr. Dhonden asked me a series of questions and discussed the diet restrictions and other things that I could do to help myself return to health and balance. I became very quiet to try to hear what he was hearing in my pulses.

I asked about having a baby and I was surprised by the directness of Dr. Dhonden’s answer which at the time was difficult but appreciated; and now his candor is something for which I am doubly grateful.

Then Dr. Dhonden told Dr. Tenzin what prescription I needed and he wrote it on the pad. People are then asked to send their herbal prescription to the clinic in India to be filled. After approximately 3 to 4 weeks the herbal compounds arrive, large round redolent pills, the colors of earth. The translator had given me instructions for taking the medicine so when they arrived from India and I held them in my hands to take them for the first time, I was struck by their gnome like presence and my mind filled up with the dank earthy smells the herbs create.

Curtis and I followed Dr. Dhonden’s dietary advice and took the Tibetan pills as directed. Tibetan herbal medicine works on causes rather than just symptoms, so the medicine can take a while to work fully as is often the case with herbal medicine.

In our case, it took several months. Dr. Dhonden had explained to us that we had food and mold allergies as well as parasites.

We had not gone to see Dr. Dhonden about food allergies, but now we began to realize the importance of going to a physician who thinks in terms of bringing your whole body into balance rather than treating individual symptoms.

The Tibetan medicine and restricted diet were also working at deep levels on the damage our digestive systems had sustained.

We had a rocky start when the herbs seemed to react very badly with foods on our “forbidden food” list. Then we realized that for us, the herbs brought our diets to our attention, so we could begin to understand the energetic effects that the various foods we were eating all the time were having on our health.

Garlic lovers, we had enjoyed the new vogue in locally farmed heirloom garlic which spilled in abundance with multi-colored garlics & ramps into Union Square farmers’ market each spring. Each spring I would make my garlic tonic soup using three entire heads of garlic with its’ dozens of cloves turned into a soft sweet mash to give body and name to the soup. And of course, living in NYC, we found a thousand local restaurants in which to further enjoy the ubiquitous bulb.

But Dr. Dhonden told us we should eliminate it from our diet. At first, I didn’t believe it and continued to cook with garlic. After all, garlic has many wonderful healing properties. And I was tempted by the proximity of abundant fresh young garlic.

We did start to notice that our symptoms spiked whenever we ate garlic. And when we cut garlic out of our diets, our symptoms abated.

Trying to get fed in Manhattan without garlic provokes a mixed response from forget it, to pity or disbelief, as if we were gastronomically Midwestern, or something. It was too much trouble to go out to eat. I hated having to tell people I’m allergic to garlic.

We knew that it’s better to cook for ourselves at home anyway in order to take charge of our own health. This is the first best way to practice preventive medicine.

This is just one of numerous examples. We realized, through a painful process of trial and error that was stimulated by our reactions to the combination of the foods and the Tibetan herbs, that the diet Dr. Dhonden had prescribed for us helped us in a variety of ways.

As we continued with the treatment we felt continuously better.

Curtis, who had stomach and sinus problems since childhood, had been taking antihistamines, antacids and other Western pharmaceuticals for decades.

Now he realized that improper diet and food allergies were to blame for the bulk of his chronic digestive and bronchial problems. He also realized that the pharmaceuticals could never eliminate the chronic conditions, only mask the symptoms temporarily.

Now, Curtis needs no antihistamines, and we haven’t had antacids in the house for years. We use very few pharmaceutical products.

By the time we had recovered completely, six months after our first visit, Curtis and I had changed our diets completely, eliminating coffee, alcohol, smoking, dairy, meat and more.

The benefits from this dietary change and from the Tibetan medicines, which we continue to take, under Dr. Dhonden’s care, have been too numerous to mention.

That first visit was in 1996 and since then Tibetan medicine has helped to cultivate in me an even deeper appreciation for the power of herbal medicine. And for the power of direct communication between patient and doctor. I am so grateful to be under Dr. Dhonden’s care.

(Note: This story is a personal account of a visit with my doctor and is in no way an advertisement or solicitation for Dr. Yeshi Dhonden. Nor is Dr. Dhonden affiliated with Satya Center. Please be advised that nothing in this story should be considered medical advice. Please be responsible and informed in your healthcare choices.) 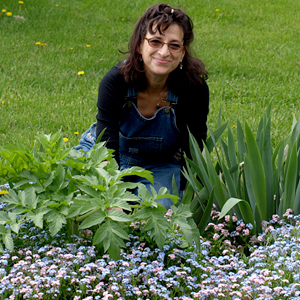 Jane Sherry, one of the Founders of Satya Center is a Reiki practitioner/teacher, spiritual counselor, creator of healing art talismans, healing gardens & loves to cook! She has a background in the visual arts before moving into the healing arts and has been a longtime lover of herbs & spices & cooking. She newly resides in South Florida. She works the Satya Center healing practice with co-founder and husband, Curtis Lang and co-operates the Satya Center Crystal Gallery and web portal. Plans for new gardens are germinating fast here in the Florida sunshine, well watered by lots of drought breaking winter rains. You will always find crystals in among the herbs, flowers & vegetable gardens!