The Integration of Magic and Activism 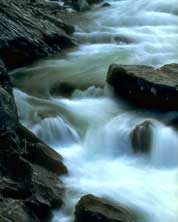 No sane person with a life really wants to be a political activist. When activism is exciting, it tends to involve the risk of bodily harm or incarceration, and when it's safe, it is often tedious, dry, and boring. Activism tends to put one into contact with extremely unpleasant people, whether they are media interviewers, riot cops, or at times, your fellow activists. Not only that, it generates enormous feelings of frustration and rage, makes your throat sore from shouting, and hurts your feet.

Nonetheless, at this moment in history, we are called to act as if we truly believe that the Earth is a living, conscious being that we're part of, that human beings are interconnected and precious, and that liberty and justice for all is a desirable thing.

Now, with the Bush forces pushing into an aggressive war, with horrific environmental and social problems left unaddressed, the need for activism is stronger than ever. The stakes have never been higher, and the sense of urgency is palpable.

Reclaiming folks have been out there -- taking part in marches and demonstrations and protests from Seattle to Washington DC, bringing magic and ritual and spiral dances into what sometimes seems like the zone of battle. And doing the proactive work beyond the protest -- helping to organize our communities, provide healing, food, nurturing for children, music, art, and ritual -- all the things that embody the world we want to live in. 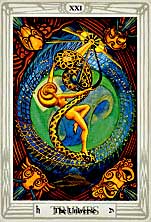 The integration of magic and activism sometimes means bringing magic into an action -- doing a spiral dance in the midst of the tear gas of Quebec City, or in Grand Central station surrounded by riot cops. It might mean starting our strategic planning with a trance or a Tarot reading, or invoking Water as we work against the privatization of water resources.

But that integration also means that our rituals are informed by our activism, and by the real life issues that we address. It means a different conception of spirituality -- that spirituality and ritual are not something removed from the world, but are deeply embedded in it.

Reclaiming is founded on Earth-based spirituality, which rejects the split between spirit and matter, and claims nature and the physical, material world as equally sacred with the spirit.

We don't ideologically believe in the separation of spirit and matter, but in practice, we still tend to think that things that are too material, too real-life, are somehow not as spiritual. So a trance to Faery is perceived as "spiritual," whereas a trance to a Brazilian favela slum is not. We can argue about the reality of Faery, but the favela is undeniably real. If we truly believe that our spirituality is about deep interconnectedness, maybe it's more important for us to grapple internally with the reality of the favela than to dance with the faeries.

Of course, visualizing the faeries generally makes us feel good, whereas thinking about slums and wars and international trade agreements often makes us uncomfortable. Even angry or sad or hopeless or guilty?

Much of our magic and our community work is about creating spaces of refuge from a harsh and often hostile world, safe places where people can heal and regenerate, renew our energies and learn new skills. In that work, we try to release guilt, rage, and frustration, and generally turn them into positive emotions.

Safety and refuge and healing are important aspects of spiritual community. But they are not the whole of spirituality. Feeling good is not the measure by which we should judge our spiritual work. Ritual is more than self-soothing activity.

Spirituality is also about challenge and disturbance, about pushing our edges and giving us the support we need to take great risks. The Goddess is not just a light, happy maiden or a nurturing mother. She is death as well as birth, dark as well as light, rage as well as compassion -- and if we shy away from her fiercer embrace we undercut both her own power and our own growth.

There are times when it is inappropriate to feel wholly good. Now is one of them. As the saying goes, "If you aren't angry, you aren't paying attention."

This doesn't mean that we need to be in a constant state of rage or irritability or guilt. It means we need to use our magical tools to face the stark and overwhelming realities that confront us, acknowledge our feelings, and transmute them into the energy we need for change. 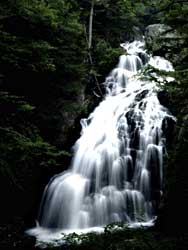 Last Fall, before the Spiral Dance [Samhain ritual in San Francisco], we received a letter strongly objecting to an invocation from the year before, when we had staged a mock march to invoke Water, complete with a river of cloth and chants that began, "No FTAA, NO WTO, No Privatizing, Let the river flow!" The writer objected to the ritual being turned into a "pep rally."

I never had time to reply to her letter, but I was grateful to the writer because it stimulated a lot of thinking for me. Everyone has the right to their own opinion about a ritual, and to their own aesthetics. There's generally at least one invocation in every ritual that I could personally do without. But what interested me about the letter was her unspoken assumption that an issue such as the privatization of water was somehow an extraneous element that didn't really belong in ritual, and turned it into something else.

For those of us who created the invocation, the privatization of water is a deeply spiritual issue. Because the water we hold sacred is not some abstract image or fantasy of Water, but the real stuff that we need to drink and bathe and grow our gardens, that provides the crucial habitat for fish and plants and thousands of other creatures, that is the Earth's literal life blood.

If two-thirds of the people on the Earth don't have access to the water they need -- as is predicted within another decade or two -- and I am integrally connected to those people, that's a spiritual crisis as well as a physical and political crisis. And if I've been engaged with that issue, politically and magically (as we have been in many of the actions around global trade agreements that further the corporate takeover of the planet's water), I need my rituals to reflect that struggle and energize my work.

Another common, unspoken assumption is that spirituality is about calm and peace, and conflict is unspiritual. Which of course makes it hard to integrate the spiritual with the political, which is all about conflict.

In New Age circles, a common slogan is that "What you resist, persists." Truly spiritual people are never supposed to be confrontational or adversarial -- that would be perpetuating an unevolved, "us-them" dualism.

I don't know from what spiritual tradition the "what you resist, persists" slogan originated, but I often want to ask those who blithely repeat it, "What's your evidence?" When it is so patently obvious that what you don't resist persists like hell and spreads all over the place. In fact, good, strong, solid resistance may be the only thing that stands between us and hell. Hitler didn't persist because of the Resistance -- he succeeded in taking over Germany and murdering millions because not enough people resisted.

On some deep cosmic level, we are all one, and within us we each contain the potential for good and for destruction, for compassion and hate, for generosity and greed. But even if I acknowledge the full range of impulses within myself, that doesn't erase the differences between a person acting from compassion and love, and another choosing to act from hate and greed. Moreover, it doesn't erase my responsibility to challenge a system which furthers hate and greed. If I don't resist such a system, I am complicit in what it does. I join the perpetrators in oppressing the victims. 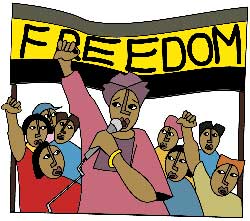 I am often astonished at well-meaning, spiritual people who advocate beaming light toward world leaders, who scold activists for expressing anger toward authorities or police, who define compassion as loving the enemy -- but somehow lose sight of the need to love our friends, our allies, and those who suffer at the hands of the perpetrators. I really don't feel much call to beam love and light at Bush or Cheney or the directors of the International Monetary Fund. Whether or not they suffer from lack of love is beyond me. From my perspective, they suffer from an excess of power, and I feel called to take it away from them. Because I do love the child in Iraq, the woman in the favela, the eighteen-year-old recruit to the Marines who never dreamed he was signing up to bomb civilians. I can't love them, or myself and my community, effectively if I can't articulate the real differences in interests and agendas between "us" and "them" -- between those who have too little social power and those who have too much.

To equalize that power means changing an enormous system. And systems don't change easily. Systems try to maintain themselves, and seek equilibrium. To change a system, you need to shake it up, disrupt the equilibrium. That often requires conflict.

To me, conflict is a deeply spiritual place. It's the high-energy place where power meets power, where change and transformation can occur.

Part of my own spirituality is the conscious practice of placing myself in places of conflict. As someone in the Pagan Cluster said after the February 15 antiwar rally in New York, which was seriously harrassed by the police, "When everyone else was running away from trouble, we were running toward it." I run toward it because I generally believe I can be useful there -- sometimes de-escalating potential violence, sometimes just holding a clear intention in the midst of chaos, sometimes just as a witness.

Our magical tools and insights, our awareness of energies and allies on many planes, can deepen and inform our activism. And our activism can deepen our magic, by encouraging us to create ritual that speaks to the real challenges we face in the world, offers the healing and renewal we need to continue working, and a community that understands that spirit and action are one.

Copyright (c) 2003 by Starhawk. All rights reserved. This copyright protects Starhawk's right to future publication of her work. Nonprofit, activist, and educational groups may circulate this essay (forward it, reprint it, translate it, post it, or reproduce it) for nonprofit uses. Please do not change any part of it without permission.

[Photo Credits: All photos are clip art, with the exception of the picture of "The Universe" card from the Crowley tarot deck, and the photo of the author from her website.]