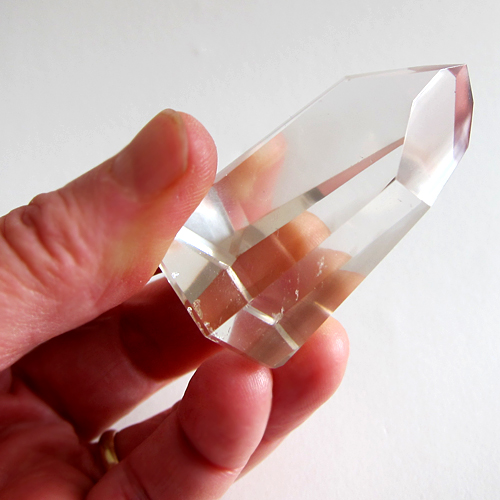 Some Lemurian Seed Crystals like this beauty exhibit a seven-sided face opposed by a triangular face are said by crystal healers to be "Channeling Crystals", and are believed to enhance our connection to inner spiritual guidance, and to facilitate communication with angelic presences, Master Guides and Spiritual Teachers in higher dimensions, who inhabit spiritual worlds.

This Lemurian Seed Crystal exhibits a termination tip with a greatly enlarged seven-sided rhombohedral face, opposed by a small triangular face. Such crystals have formed according to what is known to mineralogists as the Dauphiné habit.

This crystal structure, or habit, is named after the Dauphiné, the old name for the French Alps around Grenoble. The large rhombohedral faces of these Lemurian Seed crystals are formed because the crystal grew unevenly, due to geologic conditions in the area, and the characteristic rhombohedral faces simply grew more slowly than the rest of the crystal.

These Dauphiné habit crystals, also known as channeling crystals, are extremely powerful transmitters of energy, and they tend to transmit large beams of energy rather than the very highly concentrated streams of energy chracteristic of the Lemurian Laser Wand.

Highly prized channeling wands contain a distinctive seven sided face opposite a triangular face. Lightworkers say that these crystals have a unique ability to connect the user to inner spiritual guidance, and to sources of Higher Wisdom in spiritual worlds, such as Spirit Guides, Angelic Presences and Spiritual Teachers.

Rare Dow crystals are highly prized for their unique metaphysical properties. These extremely rare channeling wands exhibit three seven sided channeling faces separated by triangular faces. They have amplified abilities to connect the user to Higher Wisdom, Spirit Guides and Teachers and Angelic presences during meditation. In addition these Dow crystals have a remarkable ability to receive and transmit great amounts of energy over space and time.

Because this powerful channeling wand contains the distinctive seven sided face opposite a triangular face that marks a channeler, this crystal has a unique ability to connect the user to inner spiritual guidance, and to sources of Higher Wisdom in spiritual worlds, such as Spirit Guides, Angelic Presences and Spiritual Teachers.

During a crystal healing or Reiki self-treatment session, place the crystal in your left hand, the receptive hand, and form an intent to receive energy and guidance from Divine Source, your Guides, Angels and Teachers. The seven sided channeling face of the crystal's male termination tip should be pointing in toward your wrist. Close your eyes, and relax.

Meditate quietly, observing your thoughts without pursuing them or allowing them to disturb your relaxation.

Maintain a state of detached observation, neither approving or disapproving about your thoughts. Allow them to come and go, simply observing their passage. Maintain your attention on your breath, and attempt to breathe deeply and evenly. Breathe in slowly and evenly from the very bottom of your stomach and inhale deeply, until you have filled the diaphragm all the way to your throat. Exhale slowly and evenly through the nostrils, emptying the diaphragm all the way down to the very bottom of the lower stomach, several inches below the belly button. If you like, count the breaths as you go, until you reach one hundred.

Throughout the meditation, visualize a powerful white light streaming into your body from the crystal, filling it completely as you count your breaths, so that by the time you complete your meditation, your body is completely filled with the bright golden light.