The Triumph of Vishnu Over the King of Demons 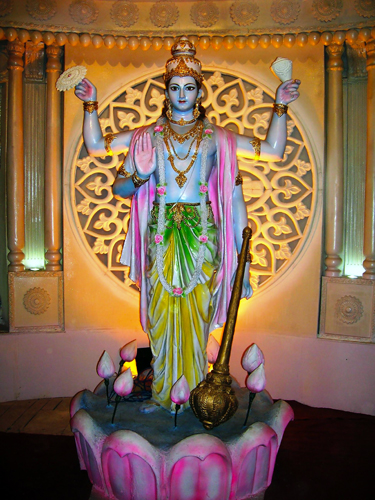 Coinciding with this month's Full Moon, on Friday, March 18, 2022, nine hundred million Hindus celebrate the ancient Spring Festival of Holi, which commemorates the victory of Lord Vishnu, Sustainer of the Universe, over the dark powers of Hiranyakashipu, the King of Demons.

Holi is a venerable and potent festival of regeneration, resurrection, renewal and new life, similar to other spring festivals in cultures around the world.

In his role as the Spiritual Sun of the Universe, who sustains the peace and order of the Universe just as the sun sustains all life on planet Earth, Lord Vishnu is said to have incarnated ten times on the planet Earth, and two of his incarnations were as the solar heroes Lord Ram and Lord Krishna. These two Divine avatars have many qualities that are similar to the qualities of Jesus Christ, the Divine Christian avatar whose death and resurrection we celebrate at the same season as Holi.

In those days, the King of Demons sought to conquer the three worlds, and to displace Lord Vishnu as Ruler of the Universe. Hiranyakashipu performed great austerities and mighty feats of prolonged meditation to perfect himself and to augment his powers. While engaged in these strenuous activities, the Gods invaded and sacked the Demon King’s city and sent his wife, who was with child, to live in the ashram of Sage Narada, the Messenger of the Gods. Narada taught the Demon Queen about the Divine qualities of Vishnu and instructed her in the WisdomSchool teachings of the Hindu Rishis, or Spiritual Masters. The child in her womb, named Prahlad, absorbed all this instruction.

Meanwhile, the Demon King Hiranyakashipu had performed such amazing feats of spiritual endurance that he had received the favor of Lord Brahma, Creator of the Universe. Lord Brahma granted the Demon King one wish. “I wish that I not be killed during day or night; inside the home or outside, not on earth or on sky; neither by a man nor an animal; neither by astra (arrow or spear) nor by shastra (sword or sacred scripture),” asked the Demon King. “Grant me the undisputed lordship over the material world.” His wish was granted.

The Demon King’s power grew great, and he attacked both the heavens and the Earth, demanding that all people worship him rather than the Gods. Neither men nor Gods could harm the Demon King because of his boon from Brahma, nor could anyone determine how he could be stopped from displacing Vishnu as Lord of the Universe, so mighty was his power.

Hiranyakashipu returned his Queen and his growing son to his newly rebuilt city. He asked young Prahlad what he had learned and Prahlad told him about the many virtues of Vishnu and the WisdomSchool teachings of the Rishis.

This enraged the Demon King. Prahlad was so eloquent and so steadfast in his love of Vishnu that Prahlad resolved to kill him. But neither weapons, snakes, nor poison could harm Prahlad, who was under Vishnu’s Divine protection. Finally the Demon King enlisted the help of his sister, Holika, who had a magical shawl that protected the wearer from the power of fire. 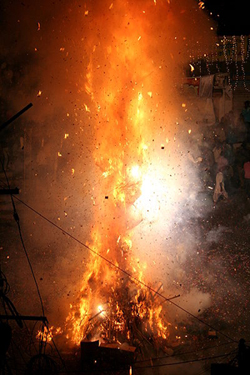 Hiranyakashipu asked Prahlad to sit on a pyre in Holika’s lap. Prahlad agreed, asking Vishnu for protection. When the fire started, a great wind blew Holika’s shawl from her, and she was utterly consumed in flames, but Prahlad was protected from harm.

When Prahlad emerged from the flames, it was as though a conquering God had entered the realms of death, struggled with the forces of Evil and emerged triumphant, resurrected by a miracle of Divine intervention. All this of course had occurred through the intervention of Vishnu, Lord of the Universe.

The Demon King sent Prahlad to his Demon-teacher, hoping to influence the boy to renounce his spiritual wisdom teachings and take the path of greed and personal power. The Demon-teacher tried to convince Prahlad that acquiring wealth and physical pleasures were the only worthwhile activities for a royal heir, or any warrior. But Prahlad thought to himself: "How can the pursuit of physical pleasures and wealth bring happiness? It will only lead to envy and anger."

Prahlad, the Demon-teacher and Hiranyakashypu were all sitting on the terrace of the Demon-King’s palace at that time. The Demon King lost his temper and invoked his own destruction unwittingly. Hiranyakashypu roared: "Where is Vishnu? If he is everywhere why is he not in this Pillar of my palace? If he is not here then I shall cut off your head with my sword. Let Vishnu, your Lord protect you."

Lord Vishnu had agreed to refrain from attacking the Demon King as part of the boon from Lord Brahma, but Hiranyakashypu’s rash challenge had served as an invocation of the Lord of the Universe, who no longer was bound by the bonds of his agreement with Lord Brahma.

Lord Vishnu appeared from the pillar in the form of a Narasimha (who is half-man and half-lion) and killed the Demon King at dusk (which was neither day nor night), on the steps of the porch of his palace (which was neither inside the house nor outside) by restraining him on his lap (which is neither in the sky nor on the earth) and mauling him with his claws (which are neither astra nor shastra).

It is the miracle of the pyre of Prahlad that is celebrated on the Festival of Holi. On the first day of Holi, bonfires are lit at night and effigies of Holika are burnt to commemorate the trials of Prahlad and the triumph of Vishnu over the Demon King. The sacred fires of Holi are lit amidst the chanting of specific mantras intended for the destruction of all demonic forces.

Offerings of wheat and oats were made to the sacrificial fire in honor of Vishnu, marking Holi as a festival of fertility and a time when great care is taken to perform rituals of protection and make offerings designed to insure a successful harvest.

On the second day of Holi, known as Dhuleti, celebrants spend the day throwing coloured powder and water at each other. This playful activity has a spiritual and medicinal significance. The changeable weather of the spring season, alternating between cold and increasing warmth, is believed to cause viral fevers and colds and, on a more spiritual level, to cause disruptions in the smooth flow of prana, or Universal Life Force energy, throughout the body and the aura. 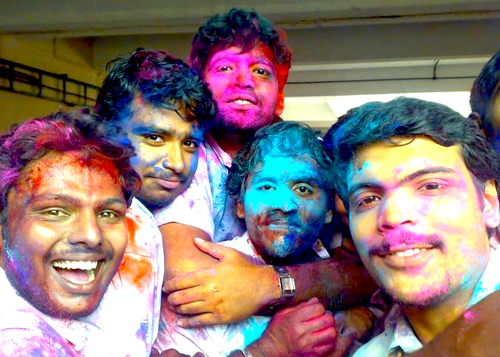 The colored powders are traditionally made of Neem, Kumkum, Haldi, Bilva, and other medicinal herbs prescribed by Ayurvedic doctors to restore the smooth flow of prana and ward off potential physical illnesses. Rangapanchami occurs a few days later on a Panchami (fifth day of the full moon), marking the end of the Holi Festival of Colors.