In the 21st Century, most Christians view the Feast of the Epiphany, taking place yearly on January 6, as a mysterious legend, recounted only in the Gospel of Matthew, a perhaps metaphorical tribute to the glory of the Christ child, and a punctuation point marking the end of the Christmas season.

Esoteric Christian Initiates say that the Epiphany is a spiritual festival equal in importance to Christmas itself, a day to celebrate the unbroken tradition of Wisdom School teachings that extends from ancient Middle Eastern sources, through the Egyptian Mystery Schools, extending to the Greek Hermetic tradition and the Gnostic stream of visionary Christianity. 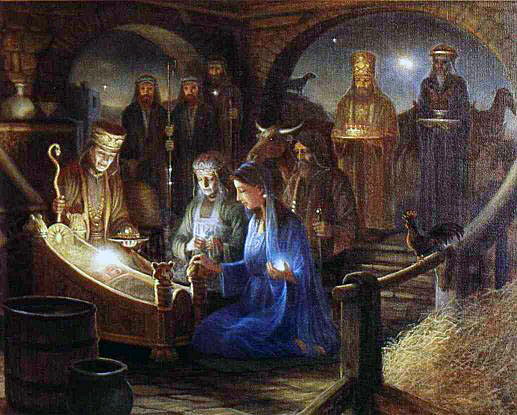 Adoration of the Magi by Bengt Alfredson
Commissioned by Adrian Gilbert for his book,
Magi: The Quest for a Secret Tradition

The Grand Conjunction of Jupiter, Saturn and Mercury in Pisces that occurred 6-7 B.C.E. is thought by many astrologers to account for the miraculous appearance of the Star of Bethlehem heralding the birth of Jesus Christ. According to the Gospel of Matthew, one of the more mythological gospels, the Star of Bethlehem guided the Three Magi from Babylon to Bethlehem where they honored the newborn Avatar with gifts of gold, frankincense and myrrh.

See our articles entitled Winter Solstice Triple Jupiter-Saturn Conjunction 2020 Cosmic Weather Forecast and especially A Christmas Story and Meditation Upon the Divine Mother for more on that remarkable stellar event, and the December 2020 Grand Conjunction in Aquarius.

At that time, the Catholic Church had not declared the doctrine that Jesus was Christ from birth, and acted as God incarnate throughout his life. Jesus was thought to have studied for decades to prepare for the initiation that would transform him into an Avatar of Love and Light.

Early Christians, including Gnostic Mystery School Initiates, believed that Jesus had received training from Masters of Wisdom from numerous Mystery School traditions extant at that time during his childhood and young adulthood.

The Magi metaphorically represented the Wisdom School traditions of the Zoroastrians, the Egyptians and the Vedic Masters of India, and it was thought that Jesus received training in all these traditions. 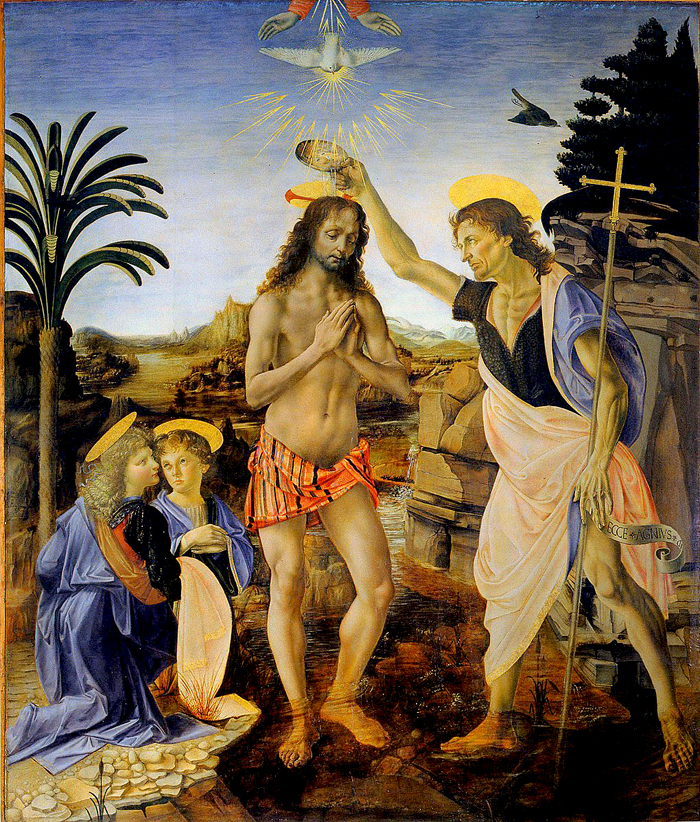 After decades of training, Jesus' most elevated initiation occurred on the Feast of the Epiphany, when John baptized Jesus in the river Jordan. This was the moment when the Holy Spirit descended upon the Initiate Jesus of Nazareth. Jesus began his ministry immediately following his baptism.

For early Christians, this moment was the defining moment of Jesus' spiritual evolution, his Second Birth, his spiritual birth as the Cosmic Christ, and January 6th was the High Holy Winter Festival of Christianity.

"The Festival of Jesus' birth was celebrated for the first time in Rome in the year A.D. 354," explains Esoteric Christian Initiate Rudolf Steiner, in his 1911 lecture entitled Birth of the Sun-Spirit as the Spirit of the Earth. "Before then this Festival was not celebrated between the 24th and 25th December; the day of supreme commemoration for those who understood something of the deep wisdom relating to the Mystery of Golgotha, was the 6th of January."

"The Epiphany was celebrated as a kind of Birth-Festival of the Christ during the first three centuries of our era," Steiner explains. "It was the Festival which was meant to revive in human souls the remembrance of the descent of the Christ Spirit into the body of Jesus of Nazareth at the Baptism by John in the Jordan. Until the year A.D. 353 the happening which men conceived to have taken place at the Baptism was commemorated on the 6th of January as the Festival of Christ's birth. For during the first centuries of Christendom an inkling still survived of the mystery that is of all mysteries the most difficult for mankind to grasp, namely, the descent of the Christ Being into the body of Jesus of Nazareth."

Here is a beautiful, simple ritual you can perform this Epiphany to help focus the abundant transformational energies of the day.

Set a candle in a candleholder on a large plate on your altar. Perform your normal spiritual practices for the day. Meditate with eyes closed for a few minutes, and visualize this Violet Flame surrounding your body and extending outward in all directions.

Reflect upon relationships, social situations, professional pursuits, love relationships, personal habits, fixed mental maps of the world and family obligations that are causing you and others pain or discomfort. Envision all those involved in these issues in a circle in front of you. Envision a circle surrounding you. Envision these two circles side by side, touching one another. Direct the energy of the Violet Flame to the intersection of these two circles. Continue your meditation.

If you like you may use the following mantra to amplify the energy of the Violet Flame for transformation of these challenging issues, relationships and social situations.

Here is the mantra. 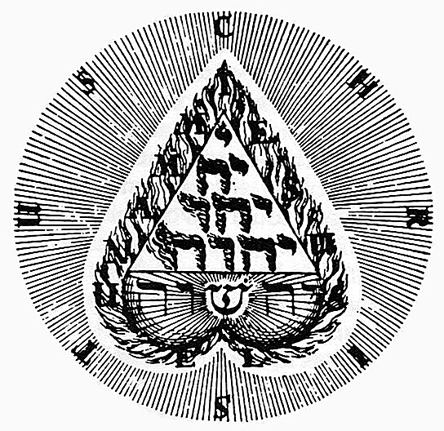 Symbol of early 17th-century mystic Jakob Böhme,
including the names "Christus", "Iesus" (Jesus),
and "Immanuel"surrounding an inverted heart
containing a Tetractys of the Hebrew letters
of the Tetragrammaton (YHVH), and at the bottom,
the Pentagrammaton (YHSVH).

These Hebrew letters stand for JHVH or Jehovah, and JHSVH (Jeheshua or Jesus). The four letters comprising the name of Jehovah, YHVH, stand for the four elements, fire, water, air and earth. The fifth element, which is spirit, is called Shin. When you put Shin, or spirit in the middle of the four elements, into YHVH, you get Jeheshua, or Jesus.

Jesus indeed infused spirit into the material world through his Divine presence and ability to sacrifice everything, even his own body, for love. So chant these nine letters over and over to yourself as you meditate and breathe deeply and slowly. In this way, you can attract Christ consciousness, the spirit of Jesus, into your aura, your mind, and your heart.

Continue to visualize the Violet Flame encompassing both circles as you meditate and chant the mantra. When you are done, take a few small pieces of paper and write down several things you'd like to change, related to the people and issues you have been meditating upon.

Chant the Five Element Mantra YHVH-YHSVH as you place these pieces of paper one after another, in the candle flame. Be sure the plate beneath is large enough to hold the ashes. You may also take the plate and the candle outside and perform this part of the ritual in the open air, if you prefer.

As you burn the paper, offer up the energy of these difficult relations to the Cosmic Christ and to Archangel Michael, the Angel of Fire.

Jane and I send you Love and Light from Winston Salem at this time of the turning of the yearly wheel of life. We pray that you all receive the grace and guidance you need to successfully attain your spiritual and material goals.