This unique 1.75" long 40+ carat gemstone quality water-clear Slender John of God Pendant Wand with Rose Quartz Crown was created by Lawrence Stoller, critically-acclaimed artist and crystal cutter who is known world-wide as a fabricator of magnificent works of art created in partnership with Nature & Light. 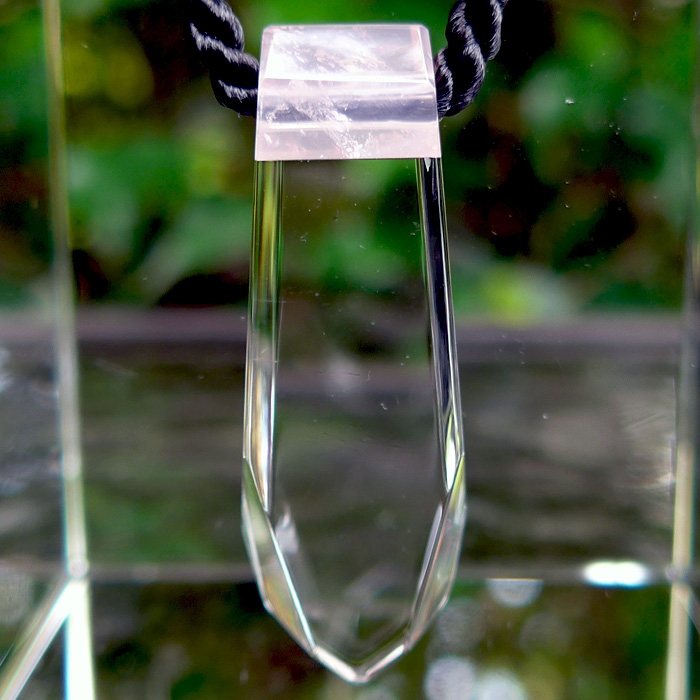 Wear it for its beauty and energy. Use it as a wand in meditation and healing.

This AAA rose quartz came from the Vasconcelos family mine in Minas Gerais, Brazil. This unique Casa Quartz Crystal and AAA Rose Quartz Pendant Wand is made with rare rose quartz that displays a rare bluish-lavender cast that adds to the beauty of its rosy glow. The bluish-lavender coloration resonates with the throat and crown chakras, which are associated with the colors blue and violet in the Western chakra system. Pink relates to the heart chakra so this beautiful gemstone pendant works to energetically connect heart, throat and crown chakras, empowering the wearer to connect with their own inner spiritual guidance and speak their own truth direct from the heart, fearlessly and clearly.

"'Creative genius' is a term I have seldom used in my life," says William E. Boyajian, President of the Geological Institute of America. "But I use it now to describe Lawrence Stoller, for these are the words that typify both his passion and his ability to preserve and protect beautiful crystals of nature -- and thereby transform them into creations that inspire countless thousands of people around the world." 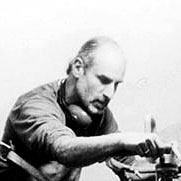 This pendant was carved from highly prized AAA gemstone quality Brazilian Rose Quartz and quartz crystal from the Casa Dom Inacio, Abadiania, Brazil and exhibits fantastic clarity, brilliant finish and faceting, and the crown is a deep rosy color characteristic of this variety of gemstone quality Rose Quartz. There are some tiny hairlike inclusions in this beauty, but none reach the impeccable surface of the stone.

John of God -- His Story

João Teixeira de Faria, also known as João de Deus (John of God), or Medium João, is perhaps the most famous trance channeling healer alive today. Over the last decade, John of God has been featured on Oprah, The Discovery Channel, and many other venues in a variety of media. 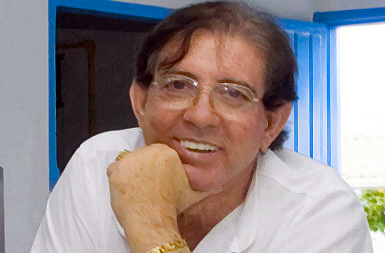 John of God is a humble man, who can neither read nor write, but who channels a large number of Beings of Light to bless and heal multitudes. Medium João says, "I don't heal. God heals. I am just a man." Medium João channels and directs divine energy for healings free of cost to any person visiting the Casa in search of a cure.

João was raised on a farm, and worked doing menial labor, and later as a tailor. At a very young age, João earned a reputation as a clairvoyant and visionary.

"Sometime in 1951 João Teixeira de Faria, age nine, rightly predicted which houses in his aunt's neighborhood would be damaged or destroyed by an impending windstorm," reports Publisher's Weekly.

One day he had a vision directing him to a nearby town, where he was welcomed by several people who said they had been expecting him. João entered the village and the next thing he recalled, he was being hugged by the grateful villagers, who told him he had spent several hours healing many people, although João had no memory of these events.

Medium João agreed to work with a large number of Spirits, discarnate doctors and healers who work through John of God's body to aid suffering humanity. He became famous, drawing the attention, envy, fear, anger and gratitude of numerous religious, medical and political functionaries in the region. During these years, John of God worked as a mendicant healer, traveling from place to place, alternately harrassed and jailed and celebrated for his healing work.

Eventually he was guided to Abadiania, and founded the Casa. 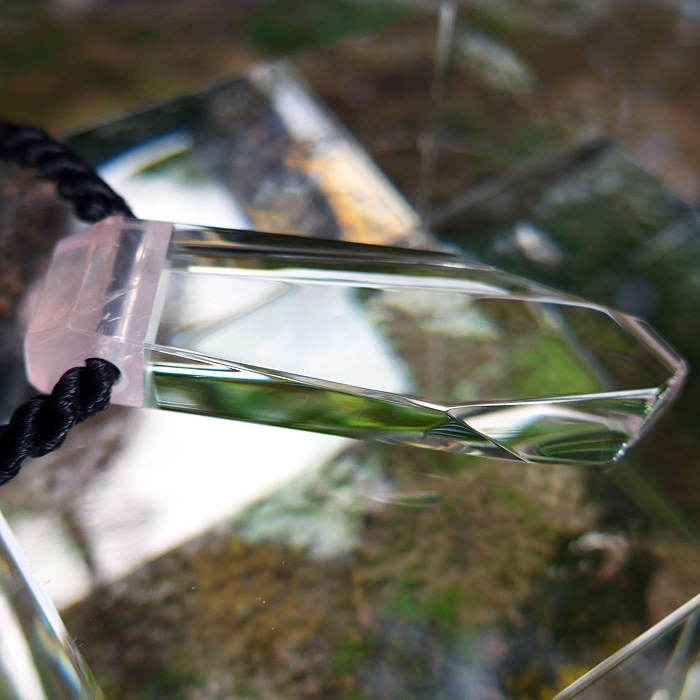 At the Casa, John of God and the myriad of Spirit Healers he channels have performed healings on millions of people over the last thirty years. People with untreatable diseases have gone on pilgrimages to the Casa from all over the world to benefit from the healing power infused into the lush gardens, and to experience psychic surgery performed by the "entities" associated with this amazing individual.

Many pilgrims have reported on the extremely potent healing energy centered at the Casa Dom Inacio (House of Ignatius), named after Medium João's patron "entity", St. Ignatius of Loyola. Directly beneath the Casa is a large deposit of pure quartz crystals, and many Lightworkers believe that the quartz in this Power Spot amplifies the healing energies channeled by Medium João and distributed throughout the area by the many Spirits of Light who commune with João.

Now we are blessed to offer Casa crystals for sale to the public. Casa crystals are infused with the energy of the Casa Dom Inacio, and of the Spirit Healers working with Medium João.

"Crystals are originally sourced from mines mostly in Goias, central Brazil, not far from the Casa," according to our source within the Casa. They are brought to the Casa each week and energized by the Spirit Healers working through Medium João.

"There are as many ways to work with Casa-energized stones as there are people with an unlimited number of ideas," reports our Source inside the Casa. "Here is a meditation that I have found to be effective: 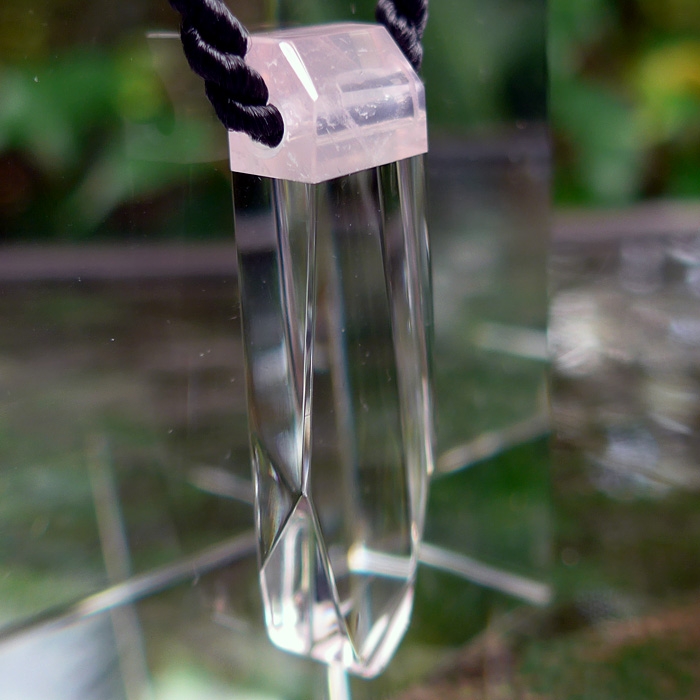 "Keeping your eyes closed, move the crystal around your body touching any places that feel good. Some parts of your body like the feeling of the cool stone, and others like the feeling of the warm stone after it has been heated in your hand. You can also direct the pointed end of the stone to areas in your body that need help, and direct energy from divine source, through your hand, amplified by the stone, and into your body."

Message from the Entities Associated with João de Deus 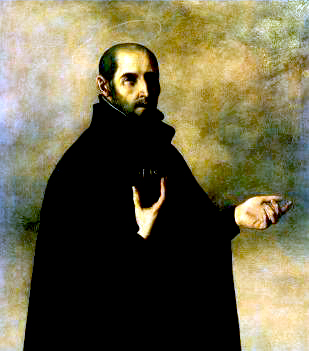 "My children, we are joined together in this moment, as you will allow it, each in his or her own capacity to hear, and according to your individual script and your willingness to be open. That you are here now is proof that you higher self has approved this direction. Still, the choice is yours. While entities can offer guidance, the guidance should always be screened through your judgment, because the experiment only works when free will is in force. Your personal guides have brought you here and now we invite you to open up to a team of entities that can help you in your process, your journey, your path. We work closely with your guides and your higher self, be assured, and adding to that your free will choice you cannot make a mistake. Feel the energy of these words and know in your heart what is appropriate for you in this moment. We are all agents of the path, working toward the same goal but from different directions, as many different directions as rays of sunshine."

"A ray of light is a metaphor for divine energy. Crystals play with light, direct it, concentrate it and magnify it. That is why a gem sparkles when you hold it in your hand. Now, imagine that the sparkle you see when you hold Casa Crystals in your hand, or on your body is not the sparkle of light, but instead it is divine healing energy entering your body. As the energy enters your body it retunes the energies that are there, retuning them to the vibration of peace and harmony that you are when your spirit is not in a body. Your body is an imperfect container created by you and for you as a learning tool. The healing that you receive from the entities of the Casa through these crystals is part of that lesson. The healing will remind you, both consciously and unconsciously of what you willingly forgot when you chose to accept the Adventure of Earth."

"You can work with Casa Crystals in any way that you will allow. They will provide their retuning function whether or not you use them with intention. However, when used with intention, Casa Crystals become much more powerful, and you will begin to see manifold and manifest change in your life."

"Your instinct is to push away that which would help you. This is a normal response because when you encounter a higher vibration it works on you like sandpaper against your skin. You shy away from this discomfort naturally to avoid the pain. But the fine gem must be cut and polished from the rough rock, and in this process suffer the pain and waste of the grinding wheel. So too must you endeavor to keep yourself focused to stay against the grinding wheel, to stay in the divine healing current so that you can be that fine sparkling gem that you were meant to be."

"For many years medium João has worked in this service in a small town in central Brazil. And now the time has arrived for his work to be more available to people around the world. He is a medium of extraordinary ability yet we are all mediums and capable of miraculous things. Working with the entities of the Casa will help you to find healing and in so doing, to expand your natural gifts, your mediumship, and your abilities to heal others."

Rose quartz normally exhibits a coloration ranging from pale pink to rose red. Scientists believe the color arises from trace amounts of titanium, iron or manganese within the crystal material. Recent research also indicates the rosy color may arise from thin microscopic fibers of the mineral dumortierite, a form of aluminum borosilicate.

Rose quartz is generally found in large formations, and usually is too clouded with inclusions to provide good material for cutting gemstones, so gemstone quality rose quartz is quite rare and valuable as a mineralogical collector's item.

The color rose pink is often associated with the heart chakra in the Western chakra system, and rose quartz is believed by crystal healers to activate and energize the heart chakra.

Crystal healers also find rose quartz to be extremely beneficial in treatment of individuals who have experienced the loss of a loved one, or who find themselves picking up on the emotional wounds of others around them.

Rose quartz is perfect to place on your altar, by your bed or in the room of a loved one or one who needs extra emotional support. It imparts a warm pink glow and elevates the emotional frequency of the environment in which it resides.
Rose quartz projects a soft, soothing, gentle energy that resonates with vibrations of love, and is especially supportive in cases where an individual is developing the capacity for self love. It sends out an energy of unconditional love, as compared with passionate love, so the energy of rose quartz resonates with the heart chakra rather than the lower chakras.

Above weight is shipping weight. Net weight of the crystal is .35 ounces or 9.9 grams.