This is one of the pages that I was given to play with when we were proofing the edition for Venus Unbound, so that I could practice attaching the metal foil add-ons, gouache overlays and the extra rubber stamp treatments that were given to many of the pages of each copy of Venus Unbound.

Here, we have the image of an adolescent Kali -- the Hindu goddess of destruction of form and liberation of the mind -- the part of ourselves which is continuously revealing new possibilities as we evolve on our human path. The dream narrative reads as follows:

I pass by young boys playing ball in the street. I have to stop their game in order to pass. One boy closest to me has a cage over his head covering his face with its bars. There are beautiful white iridescent doves dying strewn on the sidewalk next to the boys playing. It seems as though they kill the doves during their game. Two birds lie directly on my path, dead and shimmering; a third one moves its head from side to side slowly in the throes of death.

See the detail below. Read more about Venus Unbound. 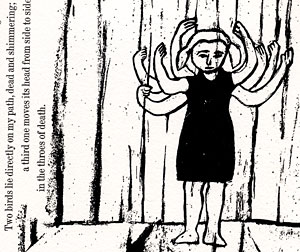