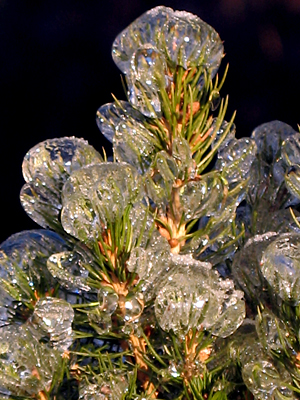 The old stories a scrim through which all of the old me's glimmer faintly.

Layered on top of the holiday mixture of pleasures & pains-- weather emergencies. The ice storm.

The layer below, the time for us all leading up to the holidays, upon which the final tapestry of 2008 rested--financial meltdowns, political scandals and real hardship around the world.

And the ice storm.

Curtis made a funny face when I said I would use the word susurrus to describe the sound of that night, the night of the Ice Storm. He didn't like the word, but for me it is the perfect word, an onomatopoeic expression; six hours of pouring sleet & frozen rain.

It was his "slithering snakes on the roof"- susurrus. 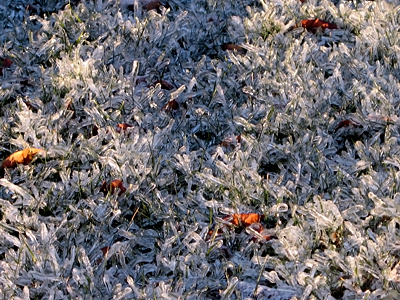 And still the slithering susurrus of the snakes on the roof continued.

And after. After the storm, there were the lights! 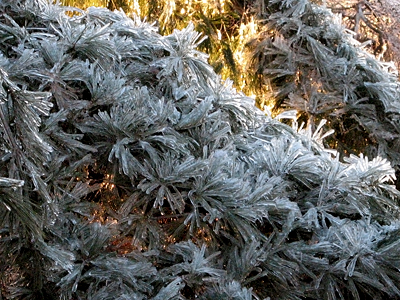 Two days later, the sun arrived & what a glorious sight! A surreal ice painting lit from all sides by sunlight. Sunrise & sunset painted a glittery dreamlike portrait in pinks & reds & salmons all reflecting back together in a rosy icy glow. 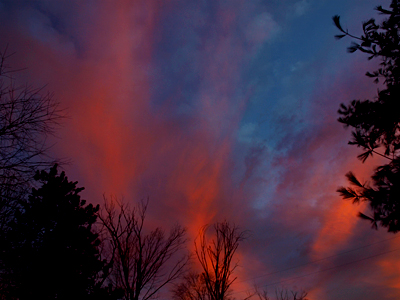 And how cold, and wires on the road, and worries about people who lived alone or the sick or the aged, and wondering how they could cope with the loss of power, of heat, of services, of water, of a way to even get down the road for help.

And two days afterward, we could drive down the road finally; getting out into a nearby town where the power was restored or not ever lost, realizing how dependent we are on the many services we take for granted most of the time. 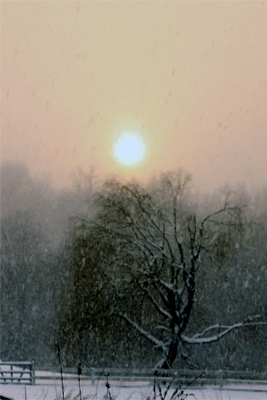 Telephone. Electricity. Roads to drive on. Refrigerated food always ready to be prepared into the evening meal. Plumbing which flushes our waste away so we don't have to look at it, mess with it, think at all about it. Trees which threaten the roof being trimmed of their broken bones. Services we consider our birthright, not realizing they are a privilege.

Comparing notes with our neighbors, who had power off for more than two days, more than five days, more than one week, we all agreed that our hearts overflowed with gratititde & love for the army of strangers who came to rescue us from the darkness & the cold. We wondered how many kisses to bestow, how many warm wishes of goodness we could heap upon them & their loved ones that would repay the sense of gratitude we felt at their presence.

We all agreed on not knowing how to express that gratitude. We all agreed that we were reminded of our dependence & interdependence on one another & the kindess of strangers.

Ah, you say, so now you remember & consider the heroic daily tasks these strangers perform on your behalf? Strangers who perform their jobs to feed their families so that I may carry on as I do with a business dependent on computers, on transport & bits & bytes. So that I may eat my meal & wash my hands in relatively clean water. 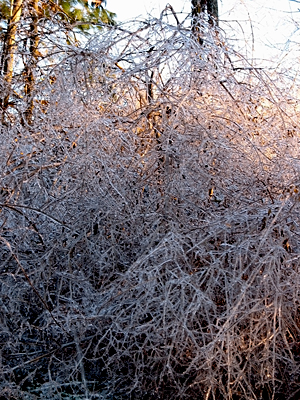 So, as we enter the new year which brings us a black family in the white house, an economy devasted by greed, poor leadership & even worse--criminals running the show, a new year where too many will lose or have already lost their homes, their livelihoods, their sense of worth (after all, we live in a culture where one's sense of worth is often tied up only with one's economic status), where the weather changes seem to be taking place in an unbelievable hurry, much faster even than the climate change scientists have predicted, when there are no glaciers to be found in the Glacier National Park in Montana, where storms gather their rage around them & devastate whole communities with floods, ice, mud, wind, hurricanes, avalanches, as we enter the beginning of this new year of 2009, we find ourselves on the brink of tremendous change.

We encourage you to focus more on community & less on blame, more on working together to manifest new paradigms & less on trying to keep things as they were. We encourage you to find ways to conserve energy, to not be sedated into believing the lullaby of cheap gas means buy that SUV, to not be overwhelmed in the face of adversity to sit back & do the same old thing. 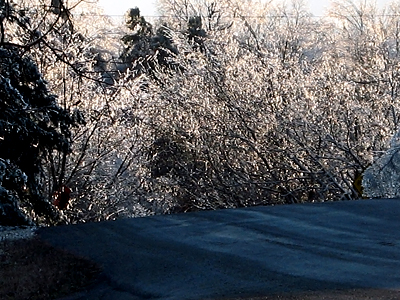 I feel certain that each of us must recreate a new future. We can go no further in the direction we're collectively headed. We need to do the hard work to change directions -- toward a future where farms & gardens spring up throughout suburbs & cities, where clean food & clean water for all is a priority, one that we understand in our hearts & act upon with our resources.

A new future now, where the chemical & pharmaceutical industries do not set the rules, where PAC monies can no longer sway our political leaders, where petty grudges are set aside for new ways of connecting. 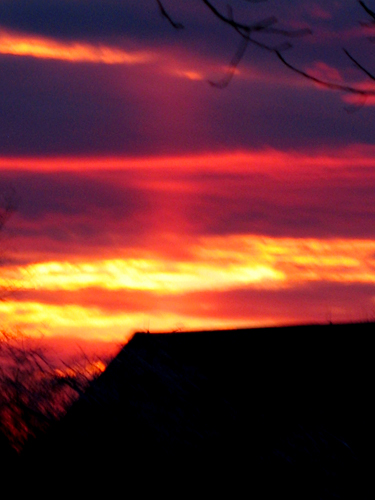 In 2009, it is my wish, and fervent prayer, that wars will end, that the poor will be respected, not punished, that neither religious views, gender, economic status, race nor political views shall stop us from working together, as we must, as a global community of equal individuals and of diverse, beautiful communities with respect for one another, finding common ground as a family of peoples who share and steward a magnificent planet, here all together to learn to be more fully human. 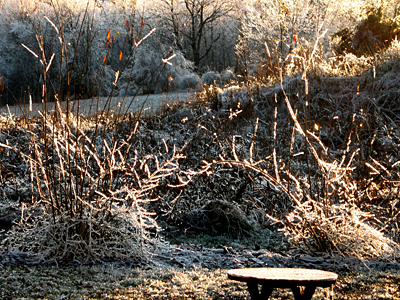 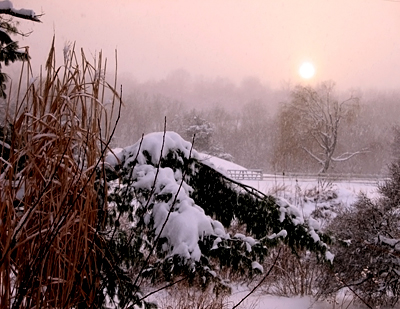 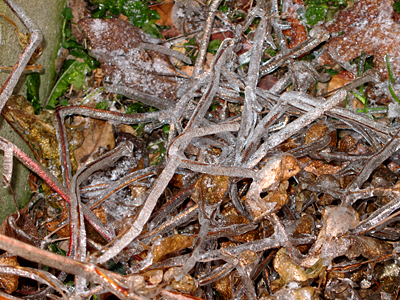 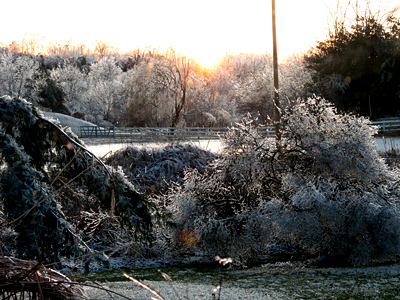 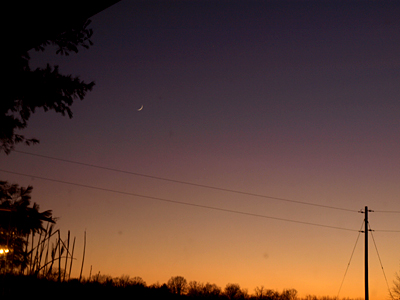 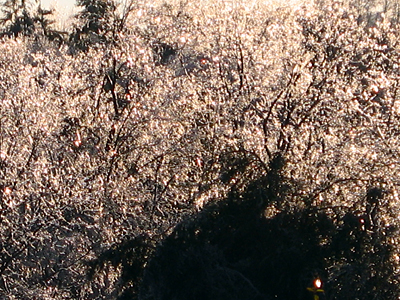 [Original Photographs shot by Curtis Lang. The sunset shot is of a 'Sun Pillar'. See below.]

"A sun pillar is a vertical shaft of light extending upward or downward from the sun. Typically seen during sunrise or sunset, sun pillars form when sunlight reflects off the surfaces of falling ice crystals associated with thin, high-level clouds (like cirrostratus clouds). The hexagonal plate-like ice crystals fall with a horizontal orientation, gently rocking from side to side as they fall.

When the sun is low on the horizon, an area of brightness appears in the sky above (or below) the sun as sunlight is reflected off the surfaces of these tipped ice crystals."

(Sun Pillar definition, text only, came from "Image/Text/Data from the University of Illinois WW2010 Project.")