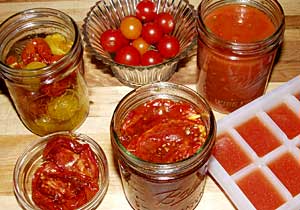 It's that time of year! No matter where you live, by now you've noticed in all the farm stands or your neighbors' gardens, that the tomatoes are ripe on the vine! And there is no better way to enjoy cooked tomatoes, than by slow roasting them to bring out the full rich sweetness of this favorite fruit of the americas.

This year (2005) has been a good year for harvests of every kind, in the Northeast of the USA, but especially for corn and tomatoes, both of which love the hot weather we had during June, July and August.

Curtis and I belong to two CSA farms, one a "u-pick" share and the other a full share. Our friend Jody, one of the Roxbury Farm CSA farmers, apologized the other day, when she brought us our share, saying, sorry, this week is the tomato share. (we were having dinner together at our house, and she somehow found time to even put our share together for us!! See the Satya Center Global Visionaries section to find the Roxbury Farm listing & to learn more about the farm & csa farming). Of course, the share had more to it than tomatoes, but there was an abundance of red in that share!

It was true, there were striped heirloom tomatoes, my favorite "Juliet" plum tomatoes, and another small cooking variety, about three quarts in all! My favorite to roast, the diminutive "juliet" is so sweet, it is truly a gem. 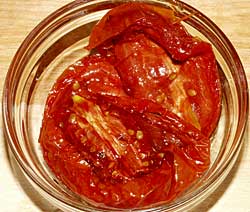 According to Rebecca Wood (see her listing in the Satya Center alt.healer directory) in the Ayurvedic tradition, tomatoes are "rajasic, stimulating outward motion, creativity, aggression, and passion--a food recommended to warriors before battle. Secondly, their sour vipak, or postdigestive effect, makes them stay sour after metabolism, which extended or excessive use-irritates the gut, to which any person with an ulcer or an already sensitive stomach will attest." Rebecca advises cooking them with cumin, mustard or other warming spices (from her book,"The New Whole Foods Encyclopedia" available from her website).

According to Paul Pitchford, in his encyclopedic work, "Healing with Whole Foods: Asian Traditions and Modern Nutrition", tomatoes have a cooling thermal nature, are cooling & cleansing to the liver, can increase appetite by encouraging digestion as well as having other highly desirable medicinal properties. He also stresses eating them in moderation because of tomatoes upsetting calcium metabolism and recommends eating one to two tomatoes daily.

I for one, have been preparing tomatoes in my favorite form, to 'put by' for winter. In the beginning, I followed the recipe, but they've been coming too fast, so I now have a fast and short method which I call the almost lazy woman's way to delicious slow roast tomatoes! Because we just moved, and I have not unpacked my canner yet, I am freezing (or eating) all that we are making.

The recipe below was originally inspired by a New York Times recipe back in 1990.


Halve your supply of roma or other cooking tomatoes, and scoop out the seeds.

Meanwhile, chop VERY finely, a couple of tablespoons of onion and saute in olive oil over a low flame until translucent, then add a bit of garlic & continue to saute another minute. Set aside. Tear several basil leaves into small pieces. Set aside.

Preheat your oven to a low temperature between 170 and 200 degrees. Oil a baking pan, and set the tomatoes in them, cut side up so that they are not touching.

Next, stuff a basil leaf into each tomato half, then put a bit of the onion/garlic mixture into the tomato cavity as well, then sprinkle salt and pepper and drizzle the tomatoes generously with more olive oil.

Roast for 4-7 hours, depending on the size of the tomatoes, until the skins are wrinkled, and most of the water is cooked out.

Place the tomatoes into containers, and cover with the oil from the pan, if you are freezing them. (Let cool before freezing.) Otherwise, watch them disappear. They are fabulous any way that you use tomatoes. Try them with fresh pasta or grain dishes, with a grating of cheese or sprinkle of fresh herbs. Try them on a tortilla with beans and cilantro. Try them blended into sauce, but be forwarned, they are very rich and you don't need much to impart a deep and full tomato taste. Once you eat these, you may not want plain tomatoes anymore (unless they're heirloom just picked at the peak of ripeness, like the Striped German tomatoes we had in August from Roxbury Farm!) 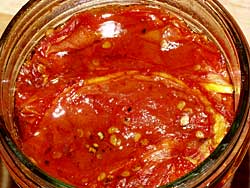 And now, as I approach tomato fatigue, I simply cut them in half, place on an oiled pan, salt and pepper the lot, then drizzle more olive oil generously and cook in a very slow oven, for a long time! That's it.

I'll write in a new recipe using slow roast tomatoes, in February, when we're dreaming of summer, and I find that last jar, at the back of the freezer.

At the top of the page, you can see a picture of some of the jars of tomatoes, the small pear shaped tomatoes from The Farm at Miller's Crossing, (just down around the corner) which I roasted whole with olive oil and salt, the divine cherry tomatoes, also from Miller's Crossing, the roast romas and also a plain sauce from heirlooms, seeds and skins strained out for a delicate sauce later, much later! I also freeze some of the sauce in ice cube trays to have on hand to season sauces, grain dishes, soups or gravies at the last minute anywhere you need a flavor boost.

PS: Do I need mention how beautifully tomatoes pair with corn, bitter greens, green beans? For a fast healthy lunch, steam some green beans, mix with leftover corn cut off the cob, and add in some of your fresh slow roast tomatoes!

We give thanks for the abundance around us here in our new home. And offer many blessings to all those who work so hard to bring us fresh food, and in gratitude for our partnership with the Nature Spirits without whom we would have no food at all!