Plants and their energies are abundant, benevolent and are a grounding force; that’s exactly what is needed and what flower essences bring to people. 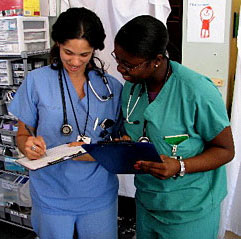 Algiers, primarily a lower income African-American community, is located across the river from New Orleans on higher ground and therefore it didn’t actually flood during and after Hurricane Katrina. Regardless, the effects on the residents were devastating though little help was sent to that area. Local community activists sent messages via the internet and “put a call out for a progressive response and for emergency medics to run a first aid station and help develop a permanent health clinic.” As a result, people from other states decided to go and help out as best they could. Initially, these were lay practitioners who had to “lie their way through the barricades” in order to be able to be of assistance to the Algiers community. They formed the “Common Ground Collective” that eventually set up a first aid station in a mosque that was made available to them. At first, they went door-to-door, checking in on people in their own homes. Days later others, including doctors, nurses, herbalists and massage therapists, made their way to Algiers in order to lend their volunteer efforts. 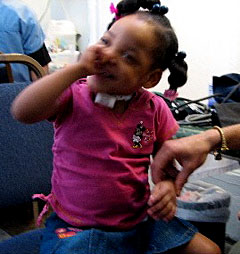 From a distance, Karyn Schwartz was able to be of assistance by sending herbal supplies to what became the Common Ground Health Clinic, via a friend who is an herbalist and who traveled there to serve as a volunteer. She called on Karyn en route and asked if Karyn could send some of her herbal medicines. After her first donation of herbal supplies, Karyn then started doing fundraising, contacting herb shops and companies for donations. By talking with friends and clients of the store at which she works, Rainbow Natural Remedies, and making additional phone calls, she estimates she facilitated sending $10,000 to $15,000 worth of complimentary medicines to the clinic.

The “first aid station” initially set up in Algiers after the hurricane became the Common Ground Health Clinic (CGHC). It is a primary care clinic which fully intends to continue operating. (CharityHospital nearby has not reopened and other general medical services are not available.) It operates as a free clinic (donation only) and is run completely by volunteers, other donations and recent support from grants that have been written. Though initially organized and staffed by generous volunteers who came from other areas of the country, CGHC is now striving toward becoming a community-controlled clinic.

People primarily go to the clinic for western medical services, but in addition to doctors and nurses, there are acupuncturists, massage therapists and herbalists. Herbalism in particular was and is useful because it is “possible to practice with more limited resources and is a modality that feels familiar to some people because of their family backgrounds.” Also, at the beginning, there was limited or no access to other medicines. Volunteer herbalists brought their own pharmacies, including flower essences, for use in the clinic. Please read more about the history of the clinic here.

Recognizing that it is currently unable to exclusively utilize volunteers from the community, CGHC continues to accept volunteers from elsewhere. More can be learned about the program on their website. Karyn Schwartz first volunteered at the clinic in February, bringing all her flower essences with her, thinking that there would be a change in energy and probably fewer volunteers would be there. She returned again in April and stayed for another month.

Karyn feels her time at the clinic was the most amazing experience of complimentary medical practice. Doctors consulted with her when they didn’t have anything for a particular condition and asked if she could provide something for the patients. Also, if the doctors preferred not to have to prescribe a medication for one reason or another, they would ask if there was something herbal that could be used instead.

During the first couple of weeks, Karyn gave flower essences to every person she spoke with. The volunteers, too, were under a lot of stress and she offered treatment to any who expressed interest in assistance with flower essences. The nurses especially were open to using them.

The language of plants

Karyn felt that in the cultural context of the clinic, herbal medicine was easy to introduce, including the use of flower essences. She feels the language of plants is an effective way of communicating; it is a great modality to help people name what is going on without the practitioner intruding on patients’ limits and privacy. It allows the practitioner to be respectful while at the same time addressing what is occurring on a deep level. Whatever “language” a patient spoke, Karyn could find a way to relate it to plants and then could match what was needed to the situation.

In addition, many people “brought their spirituality into the consultation room” to express their feelings; some told stories from the bible or spoke of their religious upbringing or even voiced prayers. Karyn felt this was a way for them to be able to communicate with her less directly which made it easier for them. In turn, she was able to respond, saying such things as “If I knew what you were praying for, I could give you a flower to help amplify those prayers.” If she had a sense of what a person was experiencing or needed, but did not want to ask intrusively, she would say, “This is a plant I use when I think about this [type of issue] when I’m stuck; I don’t know if this is something you might need…” 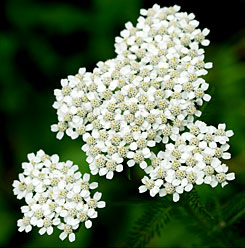 Yarrow and Rosemary – insulating and grounding

Karyn emphasizes that any medical condition a person had prior to Hurricane Katrina is worse now. People are under pressure, they’ve hardly had any decent food, there is often no privacy, and it can sometimes be difficult to relax. And, there is the feeling that their community of people has been forgotten. Their situations are complicated by insomnia, anxiety and depression that previously could be fended off, but now they’re unable to do so.

The two flower essences Karyn used most often at the clinic were Yarrow and Rosemary; she sees them as counterparts:

Everyone there is trying desperately to “hold it together”; no one has time to stop and if they stop, they will have to feel. The feeling for many is “if I start to cry I’ll never stop.” Rosemary is useful for letting go when one feels too vulnerable. Karyn says it is insulating and is “about fidelity to the self; you have to be true to yourself first—especially women—many find themselves in the position of having to take care of many others, and what I try to give them is the idea that they will not have much left to offer if they do not take care of themselves first. Rosemary insulates you when you feel that to open up your heart would be too much; it holds you while you release some of the pressure that is building up inside, while allowing the sadness to flow outward without causing harm or becoming overwhelming as it is released.”

Yarrow is useful in cases where there is so much going on around an individual, and they’re trying to be alright in the situation. “Everything is very close and there’s no escape; people are valiantly holding it together, but everyone is part of a collective crisis from which there is hardly any escape. It’s easy to absorb others’ energies at times like these.” Yarrow especially helps to protect oneself from everyone else in crises and helps one to not re-absorb the energy while trying to heal at the same time.

Read another report from New Orleans: Flower Essences Aid in the Aftermath of Hurricane Katrina.

Karyn Schwartz has worked as an herbalist for twenty years and also attended the Pacific Academy of Homeopathy. Her primary interest is in community medicine. Write to Karen at sugarpills@earthlink.net.

As a Flower Essence Society staff member, Jann Garitty is involved with web design, class administration, writing, research and practitioner outreach. She has a wide variety of personal interests and commitments as a jeweler, gardener and herbalist. For over 30 years, she has worked with Native American organizations in education, arts, and cultural outreach and is the former Director of the Sierra Storytelling Festival. Jann is the mother of two grown children and lives in the Sierra Nevada foothills of northern California with her family and a menagerie of animal companions.

Top image left includes Rashmi & Brandy & next to the right is Aamiyah getting her pulse checked.

“The Flower Essence Society (FES) is an international membership organization of health practitioners, researchers, students, and others interested in deepening knowledge of flower essence therapy. Originally founded in 1979 by Richard Katz, the society has been co-directed since 1980 by Patricia Kaminski and Richard Katz, who are married and professional partners.The Society promotes plant research and empirical clinical research on the therapeutic effects of flower essences, conducts training, certification programs, and seminars throughout the world as well as disseminating publications about flower essence and provides a communication & referral network for an estimated 50,000 active flower essence practitioners who are teaching, researching and practicing flower essence therapy in their healing work.”

The Flower Essence Society maintains a beautiful and informative website with an abundance of free research articles by & about practitioner research in the field and in depth case studies. You can make online donations at the website. You can also become a member in the society right online giving you access to an additional wealth of research essence profiles. Membership also includes access to the book, Flower Essence Repertory. The Repertory is a richly illustrated, cross referenced informative resource for anyone interested in Flower Essence therapies. Patricia and Richard also manage Flower Essence Services, which produces flower essences and herbal products at Terra Flora, their 17 acre biodynamic/organic garden and wildlife sanctuary in the northern Sierra Nevada foothills of Nevada City, California.
(Note: Jane Sherry & Curtis Lang, Satya Center Founders have been using the Flower Essence Services products for several years, and have found that they provide consistant, vital and exquisite flower essences and herbal products of a very high vibrational quality. They have a deep and profound effect personally and in their healing practice. FES very generously provides a discount for health practioners and their products are very affordable for the general public.

And, if you are interested in learning more about flower essences, reading up on groundbreaking research, flower profiles, flower affirmations, discounts on publications, practitioner referral network and member newsletters, I highly recommend investing a small amount of time and money in becoming a member of  the Flower Essence Society. It costs only $25 per year, and is a valuable way to contribute your love and energy into healing yourself, your loved ones and our only home, Planet Earth.)