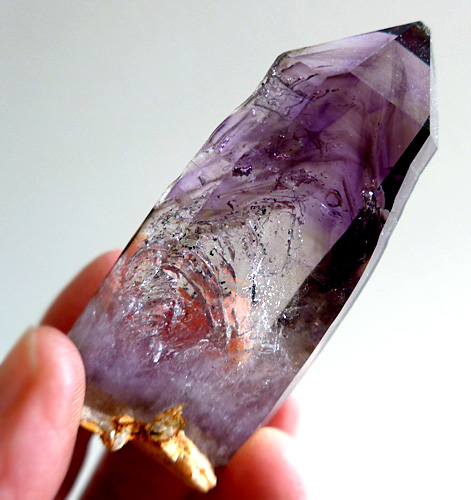 The word enhydrous comes from the Greek and means "having water within". The American Geological Institute’s Glossary of Geological Terms uses the term "enhydro" strictly to refer to "a hollow nodule or geode of chalcedony containing water, sometimes in large amounts". Most rockhounds refer to any crystal containing a pocket of water as an "enhydro" and we prefer the common usage to technical terminology so we refer to water-containing crystals as enhydros. Enydros often contain bubbles of air trapped in the pockets of water within the crystal, and so they are also sometimes called "water bubble quartz".

Water bubble quartz enhydros were formed by some estimates as much as 220-400 million years ago. The edges of the quartz formation crystallized faster than the inner regions, forming troughs that trapped water and other material. As the inner troughs cooled, and were covered by yet more layers of crystal growth, the trapped liquid would cool and contract, forming air bubbles within the crystal. 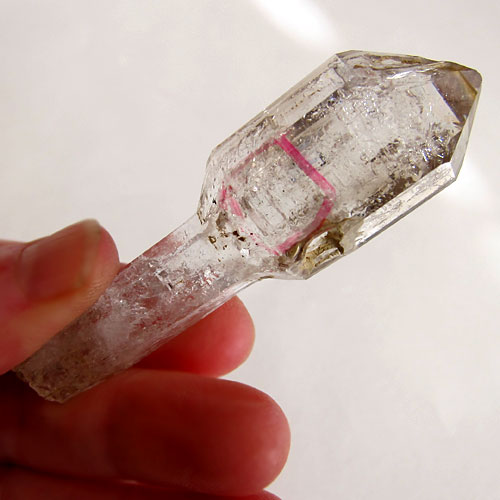 Enhydrous quartz contains water that has retained its purity over countless millennia and been continuously charged and cleansed by the surrounding quartz crystal formation, so that water represents emotions that have undergone a most rigorous and thorough purification.

Thus enhydrous crystals can be used to purify the emotions, to encourage the smooth flow of emotional life, to remove emotional blockages, and to facilitate the release of  emotional blockages caused by traumas in this and previous lifetimes. The presence of the purified water within the crystal adds to this stone's power to protect the user and purify the stone's environment of all negative emotions by transforming negative energies into more positive frequencies.

Visit the Clear Quartz Section of our Crystal Store to view enhydro crystals.