Hindu Feast of the Divine Lovers 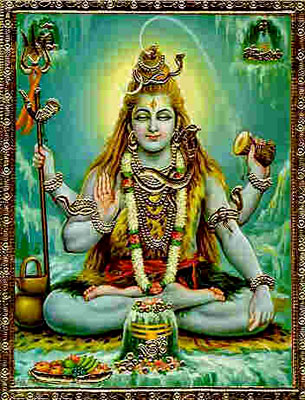 In 2018, February is the month for celebrating Divine Love manifested in the creative energies of male and female union, represented by the Divine Soulmates, Shiva and Shakti.

Tuesday, March 13, 2018 is the Hindu Feast of Shivratri, which means, The Night of Shiva. Shiva is the third person in the Hindu Trinity of Brahman, Vishnu and Shiva.

Brahman is the name for the transcendent Divine principle, the ultimate, unchanging reality, composed of pure being and consciousness. Brahman lies behind the apparent multiplicity of the phenomenal world, and is ultimately identical to the “atman” or inner essence of the human being.

Vishnu is known as the Preserver and is identified with his many Avatars, who incarnate as human beings over many lifetimes, to protect humanity from its own folly and to provide help and guidance in furtherance of humanity’s spiritual evolution. These Avatars include Krishna, Ram, Buddha and others.

Shiva is known as the Destroyer, and he is the Deity who is responsible for the destruction and creation of the Universe.As the primordial Deity, he is responsible for creating the other members of the Hindu Trinity by his thoughts during meditation. He is also the patron Deity of Yoga, and as such he destroys the illusions of the mind, purifies the heart of all negative emotions and grants Enlightenment to his devotees.

The Cosmic Marriage of Shiva and Shakti sustains Universal creation. For the yogi, the cosmic marriage is the Union of the mind with the Higher Self, the moment when the Shakti energy known as kundalini rises from the base of the spine and enters the head, conferring enlightenment.

Shiva and Shakti are the First Soulmates, and their Eternal Dance of Joy is the ecstatic playfulness that continuously propels creative evolution in all its manifestations in all the worlds.

On Shivratri, devotees of Lord Shiva, the Lord of Yoga, Sexuality and Transcendence, stay up all night, deep in meditation and prayer. They make offerings at their home altars, and ask the Lord of Creative Destruction to fulfill their heart’s desire. Although fearsome to the uninitiated, Lord Shiva is known to his devotees as a kind and generous deity, open-handed with those who acknowledge him and ever-ready to bestow great boons upon all those who approach him with an open heart. 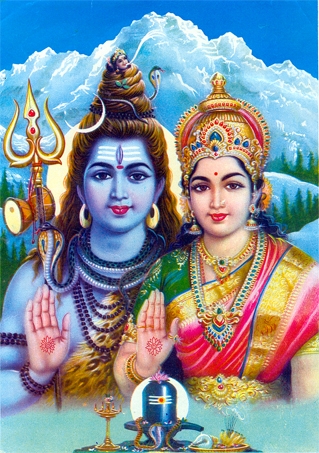 In the Puranas, a collection of Hindu sacred texts, Shiva tells the Divine Mother, his wife Parvati, that Shivratri is particularly dear to him, and that those who perform the prescribed austerities on this day will be freed from all sins.

“The 14th night of the new moon, in the dark fortnight during the month of Phalgun, is my most favourite day,” Shiva told his wife Parvati. “It is known as Shivratri. My devotees give me greater happiness by mere fasting than by ceremonial baths and offerings of flowers, sweets and incense.

The quintessential story about Shiva’s gracious nature is told on Shivratri. There was once a poor hunter named Suswara who lived in Varanasi. Situated on the crescent shaped left bank of the holy Ganga, Varanasi is one of the ancient seats of learning in India. Varanasi is a great religious center for Hindus and one of their most sacred places of pilgrimage, being visited by millions of people every year. At a distance of 12 km from Varanasi lies Sarnath, where Lord Buddha preached his first sermon. Here he revealed the eight fold path that leads to the attainment of inner peace, Enlightment and Ultimate Nirvana.

Suswara, however, was no Brahmin citydweller; he lived a simple life with his wife and children in a small hut. Suswara was no vegetarian, and therefore certainly no yogi, for yogis are vegetarians. Suswara fed his family by hunting small game in the forest surrounding his home.

Hunting small game means you have very little to put by for times when hunting is bad; it’s a hand to mouth existence. One day, when Suswara had some success hunting, his bag was growing full of small birds and animals. Wanting to extend his successful day, he wandered deeper into the forest, until darkness found him many miles from home. Suswara decided to climb a tall tree, in order to hide from predators during the long and dangerous night.

Attracted by his scent, some carnivorous beasts surrounded his tree. Suswara threw twigs down at them to discourage them, but they remained close by. Suswara was understandably nervous throughout the night, and couldn’t sleep a wink. He continued to toss leaves and twigs down from his perch in the tree, hoping to discourage the beasts below. Meanwhile, he cried from time to time as he thought of his family with great love and devotion and hoped to be reunited with them. 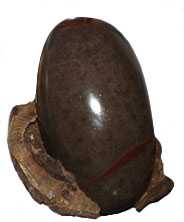 Unknown to Suswara, he was fulfilling the requirements for an exacting form of Shiva puja (or offering) on the sacred night of Shivratri. The tree Suswara was camping out in was a Bilva (or bael) tree, sacred to Shiva. The tripartite leaves of the Bilva tree and the fruit of the tree are part of well-known cures used in Ayurvedic medicine.

Suswara was unknowingly tossing these sacred leaves, dear to Shiva, down on a Shivalingam, or sacred oval stone, which lay at the base of this sacred tree – all night long. Suswara had been watering the Shivalingam with his tears.

Thus Suswara was unconsciously performing the ceremony of Shivratri,making offerings to Shiva all night long. Shiva appeared to Suswara at dawn.

The story is an allegory of the search for enlightenment. The hunter represents the devotee searching for enlightenment. The forest represents the jungle of the egoistical personality, containing the mind, with its conscious and unconscious desires, which can lead a man to act like a wild beast in pursuit of transitory pleasures, and the jungle is also the home of the untamed emotions, lust, envy, greed, jealously, anger and pride, which can consume a man’s heart and soul like wild beasts. These wild beasts living within the human being must be subdued by transcending the egoistical personality. In the allegory, Suswara performed this difficult feat by climbing the sacred tree. There is yet a deeper esoteric meaning to this story.

According to Sri Swami Sivananda, “The tree represents the spinal column. The leaves of the tree are threefold. They represent the Ida, Pingala and Sushumna Nadis, which are the regions for the activity of the moon, the sun and fire respectively, or which may be thought of as the three eyes of Shiva. The climbing of the tree is meant to represent the ascension of the Kundalini Shakti, the serpentine power, from the lowest nerve centre called the Muladhara (the base of the spine) to the Ajna Chakra (the third eye). That is the work of the Yogi.”

The spinal column is identified with Shiva in yogic texts, and the kundalini energy which rises up the spinal column during the process of yogic enlightenment is identified with Shiva’s wife, Parvati, also known as Shakti, or Devi.At dawn, Suswara achieved enlightenment as a result of his performance of the nightlong Shivratri puja, although he had no conscious awareness of what he was doing. Similarly, spiritual aspirants must workdiligently throughout their lives, responding to the necessities of live, and through the grace of the Divine, they may achieve enlightenment, despite their ignorance of Divine Wisdom.

Sri Swami Sivananda says that Suswara’s “wife and children are none other than the world. One who seeks the Grace of God must become an embodiment of love. He must have an all-embracing sympathy. His shedding of tears is symbolical of his universal love. In Yoga also, one cannot have illumination without Divine Grace. Without practicing universal love, one cannot win that Grace.”

Suswara went home the next day, and when he arrived he sold the animals he had killed and obtained food more suitable for a yogi, with which to feed his family. In doing this, he accrued more spiritual benefits for himself and his family. Before he could sit down to eat, a stranger passing by asked for something to eat. He fed the stranger, even before feeding himself and his family, and achieved yet more spiritual benefits by this act of generosity.

When Suswara died, he went immediately to the abode of Shiva, and enjoyed divine bliss for long ages. Then, thanks to the grace of Lord Shiva and because of the spiritual benefits he had obtained through his Shivratri puja and his generosity, he was reborn as King Chitrabhanu of the Ikshvaku dynasty, who ruled over the whole of Jambudvipa.

Those who wish to participate in a Shivratri ritual, should remember that Lord Shiva finds the offering of an open heart in meditation more valuable than any ceremonial offerings of precious liquids, herbs, gemstones or gold.

There is a simple Shivratri meditation that anyone can do. Simply sit and calm the mind. If you like, light a candle to symbolize the fire of the Holy Spirit, Mother Kundalini. You may also light some incense as an offering to the Divine, and to create an energetic pathway to Higher Worlds so your meditation will be heard.

Breathe in deeply from the diaphragm to the count of five. Breathe out deeply to a count of seven. Continue doing this several times, until you can simply breathe deeply in and out without counting. 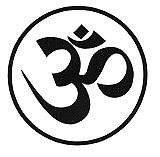 Aum Namah Shivayah means, Adoration of Shiva, and is also translated as “I honor the Divine within”. Om (Aum) means universal truth and knowledge. In saying Om, everything is encompassed independent of time. Om is the essence of all that is sacred. Nama means to bow or honor and Shivaya refers to Shiva. Shiva means purity and as we chant his name we are purified.

The sound of this mantra is said to emulate the sound of Spirit rushing down from the Higher Self into the mind. Chanting the mantra creates a channel so Spirit can flow into you from the Source of all creation. You can float upstream on the stream of sound created by chanting this mantra, and eventually you will wind up at the Source itself.

May each of you receive the Grace and Guidance you require to achieve your highest spiritual goals, just as Suswara did on Shivatri thousands of years ago!