The Festival of Navratri

In 2017 the Hindu festival of Navratri begins September 20 and continues through September 30, celebrating the triumph of the Great Goddess Durga over the demonic forces in the Cosmos. This festival of purification occurs at the same time of the year as Michaelmas and Rosh Hashanah, the autumnal Christian and Jewish festivals of community and cleansing, which we are familiar with here in the West. Navratri, which means “Nine Nights” in Gujarati, the language spoken by inhabitants of the Indian state of Gujarat, near the Great Desert, is the popular Hindu name for the festival properly known as Durga Puja.

"Navratri is a priceless opportunity, that should never be missed, to come 999 steps closer to your true self in just 9 days," says our Guru Shri Anandi Ma. "A lot faster than at other times." Ma says that spiritual practices performed at this time will be more intense and productive than at any other time of year. 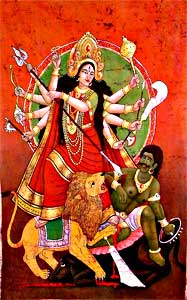 Durga, in Sanskrit, means “She who is incomprehensible or difficult to reach.” Goddess Durga is one manifestation of Shakti, the Divine Mother of the Universe. She is known by many other names such as Parvati, spouse of Lord Shiva, and Kali, Goddess of death and liberation.

Goddess Durga, slayer of demons, is pictured as having ten arms holding sword, conch, discus, rosary, bell, wine cup, shield, bow, arrow and spear. Dressed in royal red cloth she rides mounted on the lion, king of beasts. Terrifying in her aspect as a slayer of demons, she appears as a beneficent, sweet, nurturing guide for her ecstatic devotees.

She is the Universal Life Force Energy manifest in the human body, known as the Kundalini, and she lights the seven lamps of initiatic awareness, corresponding to the seven chakras of the subtle body of the human being.

When demonic forces create great imbalance on a cosmic scale, it is Goddess Durga who restores the Divine order by combining all Divine forces within her person and slaying negative thoughts, feelings, and physical manifestations throughout the Universe.

In ancient times, a powerful demon known as Mahishasura performed many austerities and remained so long in meditation that he attracted the favor of Lord Shiva, one of the three members of the Hindu Trinity of Gods -- Brahma, Vishnu and Shiva.

Shiva blessed Mahishasura with a boon, that he could not be killed by any male being. Mahishasura took this as a surety that he could never be conquered at all, and proceeded to lay waste the Universe, killing mercilessly and establishing a reign of terror that threatened to undo the balance of cosmic forces and overthrow the reign of the Gods themselves.

After many humiliations, Brahma the Creator of the Universe, Vishnu the Sustainer of Life, and Shiva the Destroyer of Illusion gathered together and combined their Shaktis, their energies, to create a powerful woman Goddess warrior who would be able to defeat Mahishasura.

After a Titanic struggle, Durga beheaded the Lord of Darkness and restored balance to the Cosmic Creation.

Since that time, she has stood ever ready to help her devotees destroy the negative emotions, misleading thought forms and physical desires that enslave them to the physical world and their own lower, animal natures, to free disciples from all encumbrances and obstacles standing in their path of spiritual evolution, to quicken the lamps of Spirit within their hearts, and to crown their meditations with visions of the Truth, called Satya, the Unity that underlies the apparent duality of material Creation.

Feasting, fasting and dancing constitute the trinity of observances dedicated to the Mother Goddess during this festival.

In Northern India, devotees of Goddess Durga observe a fast during the festival, to empower them to overcome the desires of the physical body and establish a harmonious balance between body and soul. On the physical level, fasting purifies the body of toxins and gives digestive organs a much-needed rest.

Fasting can mean living on milk, it can mean eating only one meal a day, and many other variants, depending upon where one lives in India and which spiritual path one is following. The Hindu religion has many paths and many disciplines within it.

At the end of the fasting period, devotees distribute food to the poor, another aspect of balancing the energy within the community.

In Western India, especially in Gujarat, devotees spend the nine nights of Navratri in song, dance and merriment. Garba is a graceful form of dance, wherein women dressed in exquisitely embroidered costumes gracefully circle around a pot containing a lamp. The word “Garba” means “womb”, and the lamp in the pot represents new life being birthed within the womb.

Men and women both participate in the “Dandia” dance. Pairs of dancers begin slowly, waving small, decorated bamboo sticks called dandias in their hands. At the end of these dandias are tied tiny bells called ghungroos that make a jingling sound when the sticks hit one another. As the dance progresses, the pairs of dancers break into frenzied movements, striking one another’s dandias in time to the complex, driving rhythms of the festival music. 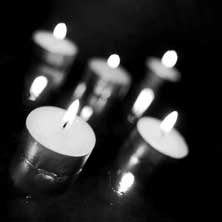 In eastern India, especially in Bengal, the Durga Puja is the principal festival during Navratri. In this region, community worship is stressed through observances known as “Sarbojanin Puja”. Huge, highly decorated temporary buildings called “pandals” are constructed to house grand communal prayer services, which are followed by mass feasting and cultural functions. The earthen icons of Goddesses Durga, Lakshmi, and Saraswati, are taken out on the tenth day in a triumphal procession to the nearby river, where they are ceremonially immersed in a ritual that enacts the transitory nature of all earthly and heavenly phenomena, and symbolizes the purification of creation in preparation for a new turn of the Cosmic Wheel, a new year and a new beginning for the community.

On the last day of Navratri, devotees also celebrate the victory of Lord Ram over the Demon King Ravana, a beautiful story which is told in the Ramayana.

(Note: painting of Durga is from Exotic India Art online. )