Greetings from Winston Salem, North Carolina from your editors, Curtis Lang and Jane Sherry. You may have been wondering what has happened to our website the last couple of weeks. Last Full Moon we said our website upgrade would be complete by July 8, and our store would reopen. LOL 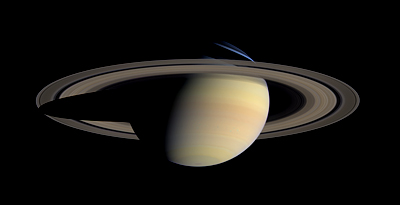 Saturn is still on my Sun in Capricorn and opposing Jane's Sun and Mars in Cancer, and of course Jupiter is in Capricorn as well, so we are finding that 2020 is a year of constant Saturnine work, intermittent setbacks and delays demanding Saturnine perseverance and self-control, and despite it all, a Jupiterian payoff for staying the course and manifesting the positive Saturn virtues.

Long story short, the website upgrade turned out to be a non-trivial programming, bug testing and Quality Assurance marathon. Jane and I have been working 8-12 hour days 7 days a week for the last three weeks, urged on by our Coding Wizard, Alex Smith, of Manhattan based the digital studio Reflexions.

Super Saturnine. But we are delighted with the Jupiterian outcome! The upgraded website is more beautiful, easier to navigate, and has a vastly improved administrative interface. It's now easier than ever to shop on a mobile device too.

Beyond all that, I have spent days editing our favorite free E-Book, Book of Love: Back to the Garden, Cultivating Love in Our Lives, a 21st Century guide to soulmates, alchemy, self-love and Unity Consciousness. Curtis did a complete rewrite, adding some new sections. And Jane has spent days going through her online studio. As you will see on the new website the book is richly illustrated with Jane's artwork.

Healing the Wounded Heart of the World by Jane Sherry

I have found that Reiki and spiritual practices are the best antidote to Covid fears and bad news blues, and I have been pleasantly surprised that these daily practices have enhanced my ability to intuitively comprehend mystifying alchemical texts I've been reading. It turns out they all have to do with love, so they were very relevant as I rewrote our Book of Love.

In the new upgraded Book of Love 2.0 I unpack and decode the meaning of The Emerald Tablets of Thoth, a touchstone of Western alchemical mystery school spirituality, written by the legendary Hermes Trismegistus, and follow that up with my elaboration of The God Theory, a 21st Century Cosmology equally compatible with the metaphysics of The Emerald Tablets, the latest findings from modern astrophysics and the wisdom teachings of Vedanta.

I also added a section to the Book of Love on how lovers can tell if their seven bodies are in alignment. The seven chakras energize those seven bodies, and each of the seven chakras and bodies affects compatibility in love relationships in different ways. Thus there are seven levels of compatibility, and seven ways we can tell if we are aligned or misaligned with our partner based upon the nature of our relationship.

I am certain that you will find it eye opening to read the description of what relationships are like when one or more of the bodies are in sync. It's quite different when several bodies are in a state of affinity simultaneously. Finally, it's important to know what happens when lovers fall out of sync on the subtle energy levels, and relationships and marriages fail.

Jane has added a selection of large images from her artworks, spanning the last 40 years, and it is uncanny how her images seem to have been created to illustrate the Book of Love. This new version of the Book of Love is a true collaboration by soulmates with decades of experience in Tarot and intuitive readings about relationships, past life regression, and counseling. We hope you will enjoy it. 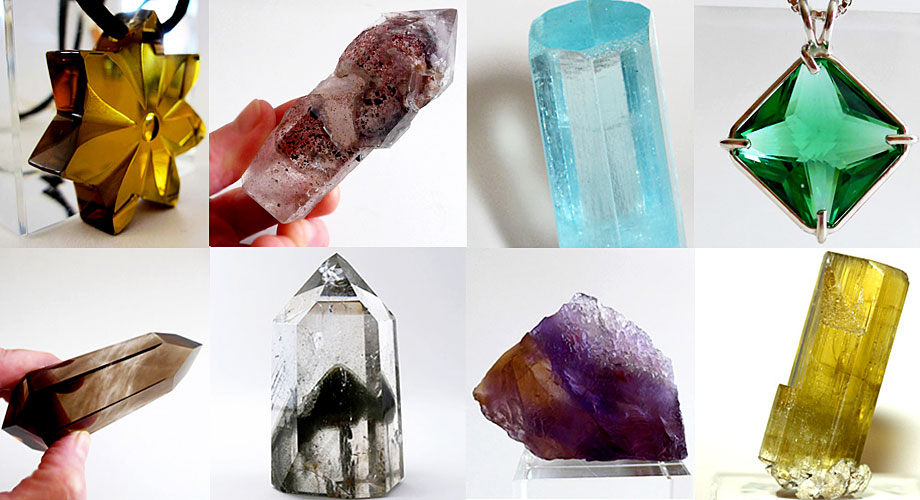 The general public will enjoy a 20% discount through the end of August, ending at midnight August 31, Eastern Time. As a special thank you to our loyal newsletter subscribers, we are going to offer an additional 5% discount on all items in the store other than our already deeply discounted Vogel wands. If you are reading this online or you are a subscriber please use the code XTRA5 at checkout. You will receive a full 25% OFF the reatil price.

The Full Moon in Aquarius occurring on Monday August 3 at 11º45' Aquarius is square Uranus in Taurus and opposes the Leo Sun, as we celebrate the Leo Solar Festival.

This creates a fixed sign T-square to start off the month, a stellar signature indicating substantial stress and tension. The irresistible force meets the immovable object and both are impacted by an unexpected freakish collision with the unpredictable that appears from out of left field. This is a recipe for civil unrest, social disorder and increasing political polarization in America for the next week or two, and is just the beginning of the gathering political storm to come. 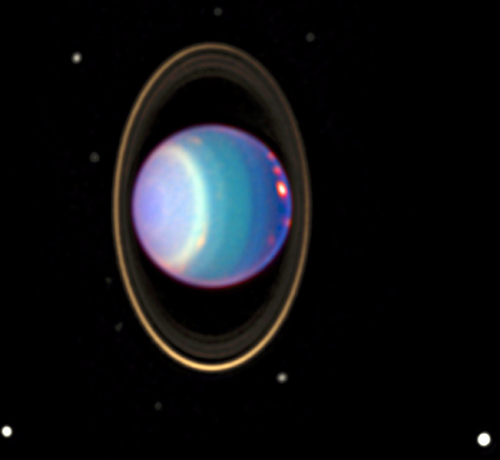 Mercury in Cancer opposes Saturn in Capricorn while Mars in Aries squares Jupiter in Capricorn. Mercury in Cancer crave safety, security, socializing and comfort foods, but Saturn in Capricorn threatens our mental desires, reminding us sternly of our limitations and of necessary restrictions. At the same time, Mars in Aries wants to take no prisoners and throw off all limitations, especially when amplified by its square to Jupiter.

Mars in Aries will be squaring outer planets in Capricorn during this time frame again and again throughout the remainder of the year while America begins its infamous Pluto Return, an astrological signature associated with revolutionary change and the End of Empire.

You can bet that this month and next, and continuing through the election and beyond, there will be more incidents like what occurred in Portland and Ohio in July.

When President Trump sent Department of Homeland Security agents and uniformed troopers with no insignia into Portland to confront protestors, and in some cases, to kidnap them off the streets while being captured on video, dramatic escalations by protestors erupted across the country. Trump has been confronted by state and local officials in Portland demanding these authoritarian tactics cease immediately, and Trump has threatened to replicate his war on American protest in other cities, especially those, like Chicago governed by Democrats and hosting a large Black Lives Matter movement. This sets the stage for escalations on both sides during the long hot month of August.

In Ohio on July 18, about a thousand heavily armed Trump supporters, bikers, Boogaloo Boys, ultra right wing militia members and white supremacists, fed up with requirements that citizens wear masks to combat the Covid epidemic, staged a rally in the state capital of Columbus, denouncing Ohio Department of Health Director Dr. Amy Acton, who had called for a state shutdown as coronavirus cases spiked.

"A swastika was painted on the Statehouse and signs straight from the Third Reich were present showing a rat with a yarmulke with the words The Real Virus. Acton’s home in suburban Bexley was attacked, requiring 24/7 protection from the state police," Bob Fitrakis and Harvey Wasserman reportedin Counterpunch.

Armed Anti-Racist Action (ARA) and Black Lives Matter (BLM) counter-protestors confronted Trump's white nationalists, but no shoot-out occurred. How long can this kind of armed confrontation in America's streets continue without tragic consequences in a country with over 300,000,000 privately owned firearms? 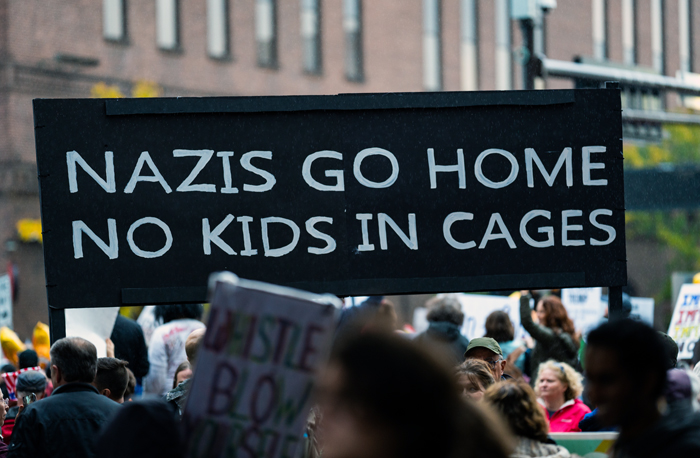 Dr. Acton resigned. Having achieved this initial success, Trump's motley crew of reactionary revolutionaries will certainly be encouraged to seek new targets, in Ohio and across the country. Trump's movement is increasingly aggressive and spoiling for a fight with Black Lives Matter protestors and left wing activists such as antifa and the ARA. The presence of hordes of militarized Trump supporters confronting armed anti-fascists and BLM activists at polling places across Ohio during the Presidential election could create a nightmare out of the last days of the Weimar Republic.

As August unfolds, Mars in Aries squares Pluto in Capricorn from August 10-16, Mars in Aries will insist on personal freedom at any cost, and Pluto in Capricorn will be triggering intense transformations in the social order and on the personal level, which will be perceived as the death of an old way of being, a descent into the Underworld and a nightmare initiation that can eventually, in the long run, lead to a phoenix like resurrection into a new social order and way of life.

With Saturn also in Capricorn hovering nearby Pluto, government power will be invoked in attempts to impose order on the mushrooming chaos.

You can be sure that the forces of state and local governments will be involved, enforcing pandemic restrictions that will cause Trump supporters to go ballistic. It is a safe bet that Trump will utilize the forces at his disposal as commander in chief to launch attacks on BLM and ARA protestors across the country, which will serve to radicalize peaceful protestors and create a legion of political martyrs. That will inflame anti-Trump protestors everywhere.

August 14-17 Sun in Leo trines Mars in Aries, Mercury in Leo trines Mars, and Sun in Leo conjuncts Mercury in Leo. Flashpoints abound. Ignition occurs. Inflammatory remarks and actions proliferate. There is also immense potential for creativity and individual achievement when this energy is channeled into constructive pursuits at the personal level and in society as a whole.

If you have a chance, try to get outside between midnight and dawn the night of August 12, when the summer Perseid showers will be at their peak, delivering up to 200 meteors an hour, twice the normal number. If you can get outside the range of city light pollution you might want to slow down your mind and lean back or lie down for a bit, because then you might see an average of one meteor a minute.

Then August 22, Mars in Aries squares Saturn in Capricorn to cap off this contentious month, resurfacing the conflicts between governments and individuals and intensifying the political polarization that is threatening to rip America apart at the seams.

This month's newsletter is short, because my fingers hurt after all the work on the Book of Love. I hope you will consider reading it and trying out some of the meditations and exercises on offer there, as an antidote to the continuous stream of inflammatory news events and the ongoing Plutonic Pan-demic reportage that now constitutes our global media environment. 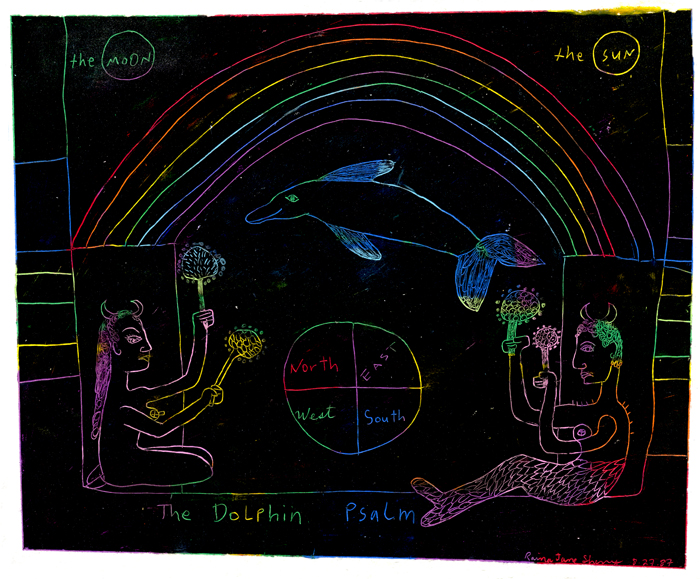 The Dolphin Psalm by Jane Sherry

Jane and I affirm that you will receive the grace and guidance you need to navigate these troubled times, and we send you Love and Light!

You have been invited to meet
The Friend

No one can resist a Divine Invitation.
That narrows down all our choices
To just two:

We can come to God
Dressed for Dancing,

Be carried on a stretcher
To God's Ward.