This beautiful gemmy water-clear Smoky Citrine Earth Heart Crystal Pendant in sterling silver is topped off with a sparkling round Peridot gemstone and comes with a sterling silver chain in its own velvet jewel box.

This unusual and beautiful new pendant from one of our suppliers has been named Earth Heart Crystal because of its ability to create a "peaceful refuge in alignment with the deep and pure Heart of the Earth, revealing lessons in Oneness and facilitating humanity in achieving global consciousness." 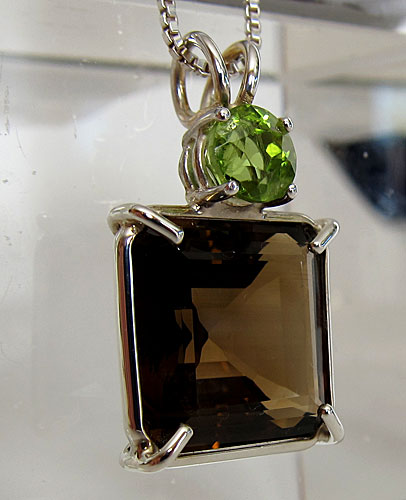 When we first worked with this pendant, before the designers had come up with a name, I named it the Medicine Wheel because in working with it, I felt a strong connection to Native American traditions as well as a sense of deep protection, calm & access to my own Higher Wisdom, as well as being connected to a long line of Wisdom Keepers.

The combination of smoky citrine and peridot energizes the solar plexus chakra, the heart chakra, and the crown chakra simultaneously, strengthening the will forces, opening the heart and connecting the bearer to Spirit.

Smoky citrine is a stone of transformation, an alchemist’s stone. Smoky citrine provides a smooth and easy, graceful access to a very deep place.

Smoky Citrine combines the energies of these two powerful types of crystal. Smoky quartz and citrine are both found in high-temperature hydrothermal veins on Brazil, and both are used to transform negative or unwanted energies.

Smoky quartz is a traditional stone of slow transformation and purification of the emotional body through deep meditation, and citrine is the golden purifier, actively transforming and elevating the sluggish – or stuck -- energies in an individual’s energy system.

The alchemical symbolism of smoky citrine manifests most clearly when the crystal is backlit or held up to a bright light, or to the sun.

The deep golden-orange-reddish glow of the transformative citrine appears to rise up within the crystal, illuminating the intensely bright darkness of the smoky quartz from within.

Smoky quartz is often used by crystal healers to facilitate the extraction of energetic blockages that prevent the smooth flow of Universal Life Force energy throughout the body, mind and aura.

Smoky quartz is excellent for grounding the user and to provide a powerful energy barrier protecting the user from intrusive negative emotions and collective thought forms from the outer environment. 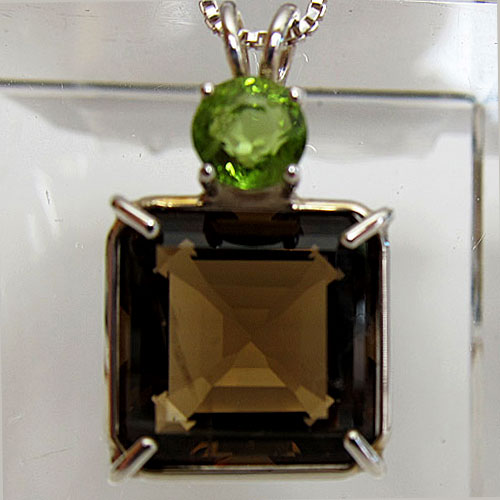 Smoky quartz "tends to refine the vibratory energies when one is in the state of meditation," Melody explains, "allowing for both the clarity of thought and the elimination of impeding will-fulness. It can be used to initiate a powerful force field which will absorb many forms of negativity, both from within oneself and from other sources."

Citrine is a form of quartz occurring in a variety of colors ranging from platinum white to yellow to orange-red.

Citrine's color is a result of iron impurities occurring naturally within the crystal. Citrine typically is formed as an iron-containing amethyst which becomes heated to the point where the iron held within the crystal undergoes a further stage of oxidation.

From a New Age perspective, citrine is associated with the color gold. Gold is the color of Christ Consciousness, and thus citrine represents the crown chakra, which could be violet, white or gold, depending upon the circumstances.

Esoteric Christianity makes a link between iron (or hematite) and Archangel Michael, and a crystal containing iron can provide the bearer with a powerful connection to Michael, providing access to the Archangel's loving wisdom and power to dissolve illusion through the activity of his famous sword, the sword of Ultimate Truth.

During the Libran month, on October 8, in the northern hemisphere, the Draconid meteor showers will be visible. At this time of year, when sensational meteor showers, largely composed of iron, traditionally streak across the night sky, Esoteric Christian philosopher Rudolph Steiner’s clairvoyant vision saw the traditional flashing iron sword of Michael. The meteoric sword of Michael was thought to cleanse the Earth’s atmosphere of summer's sulfurous influences, allowing the Higher Self to emerge and guide the initiate along the path of Spirit toward the birth of the Inner Christ Light, an event which takes place in December, during the festival of Christmas.

Peridot is said to have been one of the stones found in the breastplate of the high priest.

Crystal healers often use peridot to tonify, energize and strengthen the body, which makes sense given its close association with the solar plexus and heart. For the same reason, peridot is used in the treatment of disorders of the lungs, heart, spleen and digestive tract.

You can read more about quartz crystals in articles found at the SatyaCenter.com crystals homepage. Check out the article "Using Quartz Crystals in Digital Technology, Healing and Meditation" for an overview of the metaphysical and mineralogical properties of quartz, and a step-by-step guide explaining how to cleanse, charge, and program quartz crystals for healing, meditation and other spiritual purposes.

Note: Weight above is shipping weight. Net Weight is .20 oz.