This unique and beautiful Citrine 14 mm Super Nova Pendant with Round Amethyst accent stone is a new cut for the 21st Century from our favorite jeweler, Paul Jensen who brought you the power cuts metaphysical tools line of jewelry which includes the Star of David, Ascension Star, Angelic Star and other Tools for Evolution Jewelry. 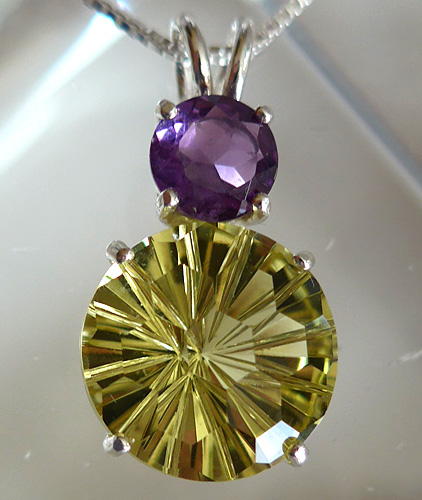 The surface of the citrine gemstone is laced with an intricate pattern of flat hexagons, like a honeycomb or the eye of a honeybee. The compound eye of a honeybee consists of an array of hexagonal visual sensors designed to maximize the honeybee's ability to detect tiny movements in shadow and in the lower, infrared light frequencies, enabling the honeybee to achieve maximum awareness of predator movements in deep shadow and also provides amazingly acute peripheral vision.

Lemon Citrine is a beautiful semi-precious stone that combines the beauty and energetic power of natural quartz with the eye-popping color and total clarity that can only be created in the laboratory.

The color of Lemon Citrine can be achieved through a combination of techniques including the use of additives, heat treatment and irradiation. Small amounts of iron can be added to the clear quartz crystal, which is often then heat-treated, a process that mimics the process by which Nature adds color to quartz crystals. In modern gemologists' laboratories irradiation is also a common procedure used to create the startling color of Lemon Citrine.

The color of natural citrine derives from small amounts (approximately 40 parts per million) of iron in the quartz. The difference between citrine and amethyst is only the oxidation state of the iron present in the quartz. Citrine typically is formed when an amethyst becomes heated and pressurized to the point where the iron held within the crystal undergoes a further stage of oxidation.

This powerful citrine and amethyst gemstone pendant is an ideal piece to wear for beauty, protection and assisting in our connection to our Higher Self & the Divine. 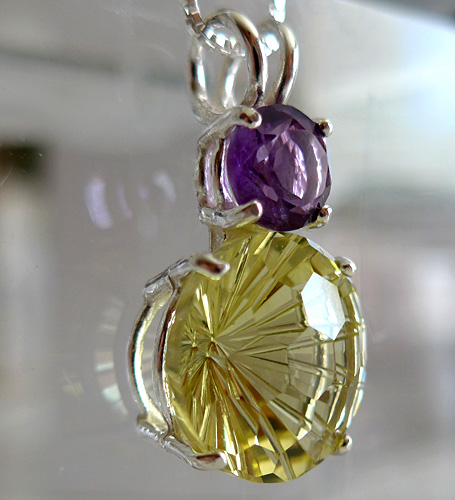 Metaphysically, the combination of amethyst and Lemon Citrine indicates the alchemical transformation of the human personality and egoistic self into the golden and violet rays of the Higher Mind and Higher Self, connected directly to Christ Consciousness.

Metaphysically, Lemon Citrine combines the energy of the Yellow and the Golden Rays, activating the solar plexus chakra and the crown chakra respectively.

When we (Curtis Lang & Jane Sherry, Satya Center founders) have used citrine in Reiki and crystal energy sessions with clients, they have reported feeling a gloden glow around them. We have also found that citrine is a powerful tool for extracting negative energies, gently dissolving energy blocks, and releasing negative emotions during sessions.

“Fine amethysts are featured in the British Crown Jewels and were also a favorite of Catherine the Great and Egyptian royalty,” according to the International Colored Gemstone Association 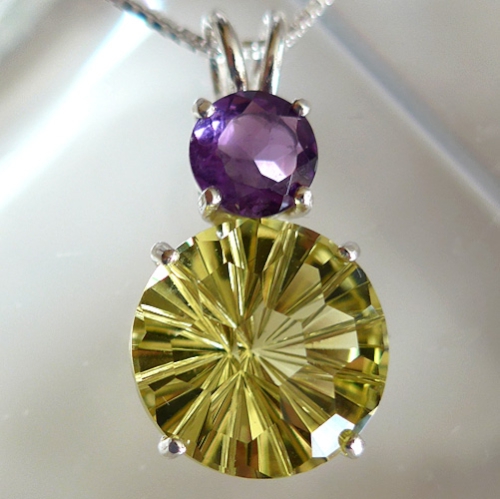 We know you will use this powerful crystal pendant with loving wisdom and respect its long journey in the Earth that has lasted for many long historical cycles. This crystal is a powerful tool, a love-gift from the Divine Mother, and should be treated with the utmost respect and appreciation.

Note: Weight above is shipping weight. Net weight averages .20 oz. Each piece is unique & may vary somewhat from appearance in the photo above in size & color. Each piece is beautiful & guaranteed to meet with your satisfaction.