This gorgeous, 1.375 inch long, 21 gram Large Enhydro Herkimer Diamond With Hematite Inclusions has a prominent bubble in a short channel visible in the picture below. You can see lots of rainbow inclusions in this lovely piece and a sprinkling of dark hematite inclusions as well. This piece has great depth and a meditation worthy inner landscape! Herkimer Diamonds are double-terminated quartz crystals with a hexagonal growth pattern that come from Herkimer County in New York State. This specimen comes from the Ace of Diamonds Mine in Middleville, New York.

This crystal transmits a very grounding, yet physically uplifting energy. Herkimers generally are known to help in clearing mind and body of unconscious fears and other negative energies. They promote relaxation and energetic renewal. The word enhydrous comes from the Greek and means having water within. The American Geological Institute’s Glossary of Geological Terms uses the term enhydro strictly to refer to "a hollow nodule or geode of chalcedony containing water, sometimes in large amounts". Most rockhounds refer to any crystal containing a pocket of water as an enhydro and we prefer the common usage to technical terminology so we refer to water-containing crystals as enhydros. Enydros often contain bubbles of air trapped in the pockets of water within the crystal, and so they are also sometimes called water bubble quartz.

Water bubble quartz enhydros were formed by some estimates as much as 220-400 million years ago. The edges of the quartz formation crystallized faster than the inner regions, forming troughs that trapped water and other material. As the inner troughs cooled, and were covered by yet more layers of crystal growth, the trapped liquid would cool and contract, forming air bubbles within the crystal. Enhydrous quartz contains water that has retained its purity over countless millennia and been continuously charged and cleansed by the surrounding quartz crystal formation, so that water represents emotions that have undergone a most rigorous and thorough purification.

Thus enhydrous crystals can be used to purify the emotions, to encourage the smooth flow of emotional life, to remove emotional blockages, and to facilitate the release of emotional blockages caused by traumas in this and previous lifetimes. The presence of the purified water within the crystal adds to this stone's power to protect the user and purify the stone's environment of all negative emotions by transforming negative energies into more positive frequencies. The Herkimer is known to lightworkers as an attunement stone. Two Herkimers can be used to attune the bearer to another person, environment or activity. Place one Herkimer in one location and keep the other with you to maintain the attunement. Two Herkimers can be held simultaneously by two people in a brief meditation, and when they each leave with one, the two will remain in attunement.
Crystal healers say that the Herkimer Diamond stimulates clairvoyant and clairaudient abilities, directing energy into the upper chakras, especially the second or third eye chakra between the eyebrows. Hematite grounds the bearer and nourishes the root chakra, enhancing one’s self of well-being and self-worth.

The combination of Herkimer Diamond and Hematite connects you to Higher Mind, Higher Purpose and Angelic Realms, while keeping you firmly grounded in physical reality. 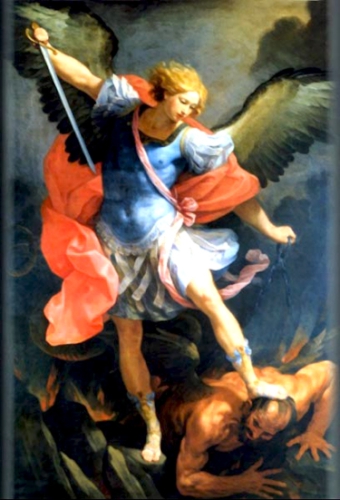 The combination of Hematite and Herkimer Diamond is a potent one, and any Lightworker could benefit from using this powerful light tool, so dear to Archangel Michael.

During the Libran month, in the first weeks of October, in the northern hemisphere, at the onset of the fall season, dedicated to Archangel Michael, the Draconid and/or Orionid meteor showers are visible. At this time of year, when sensational meteor showers, largely composed of iron, traditionally streak across the night sky, Esoteric Christian philosopher Rudolph Steiner’s clairvoyant vision saw the traditional flashing iron sword of Michael. The meteoric sword of Michael was thought to cleanse the Earth’s atmosphere of summer's sulfurous influences, allowing the Higher Self to emerge and guide the initiate along the path of Spirit toward the birth of the Inner Christ Light, an event which takes place in December, during the festival of Christmas. Note: Above weight is shipping weight, net weight is 21 grams or .74 oz.