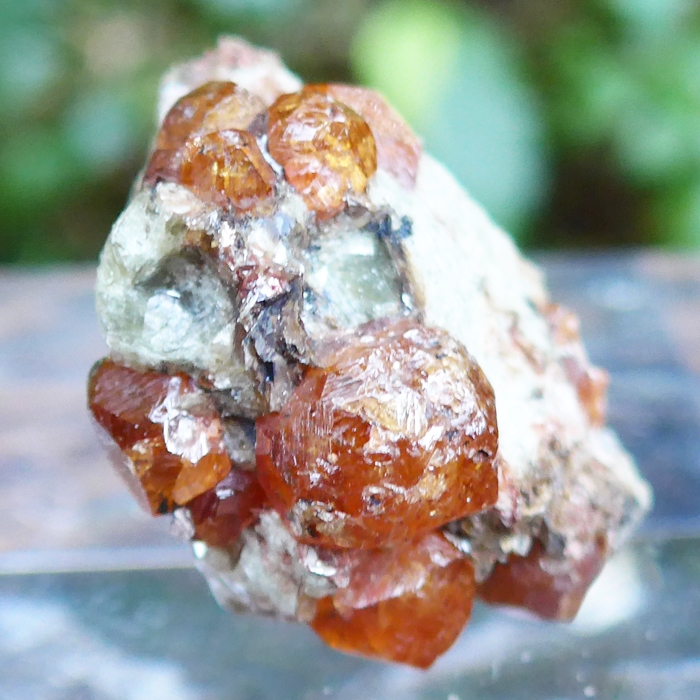 Those lovely garnets on their glittering matrix form, have brilliant inner fire, clearly visible throughout the gemstone, and come embedded in the sparkling matrix from which it was birthed deep beneath the surface of the Earth. The net weight of the twin garnets and matrix is 39 grams or 195 carat weight. 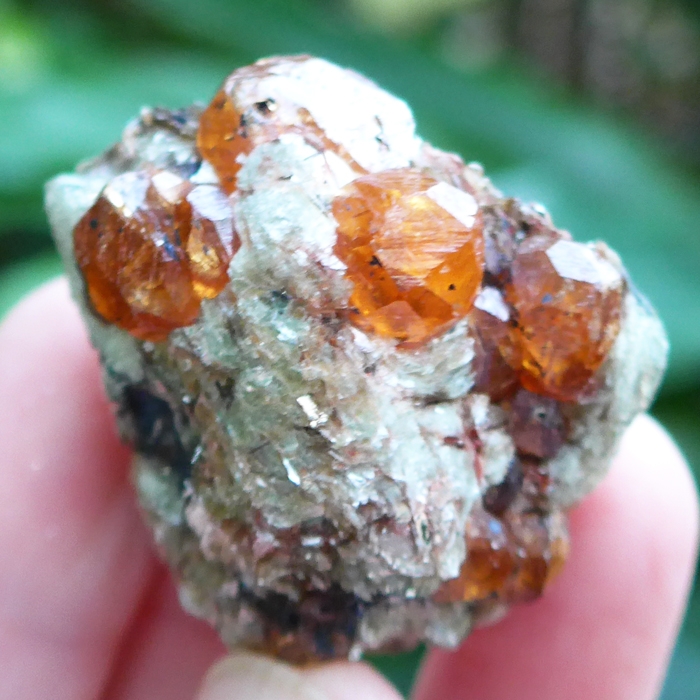 The vast vast majority, well over 90% of this material, had abundant dark inclusions, which appear to the naked eye to be braunite. These are high manganese and low hematite specimens, so the inclusions are definitely NOT hematite or any iron based material. 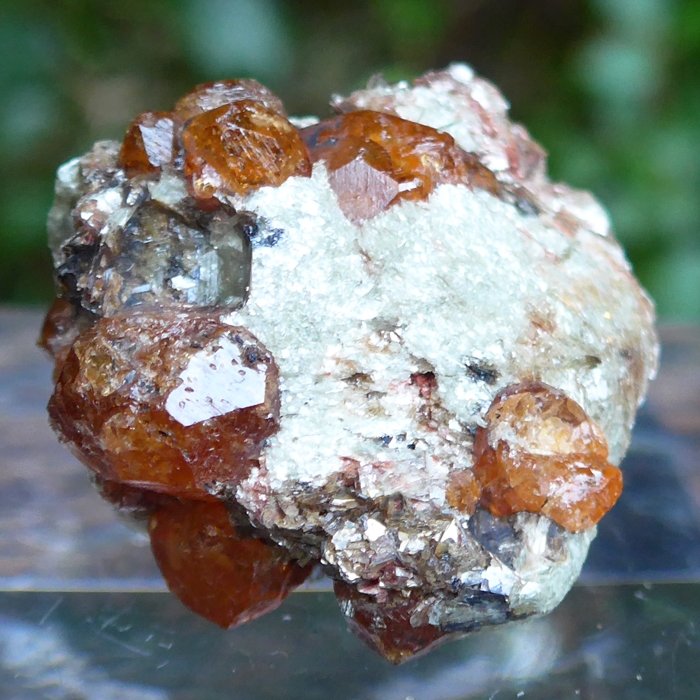 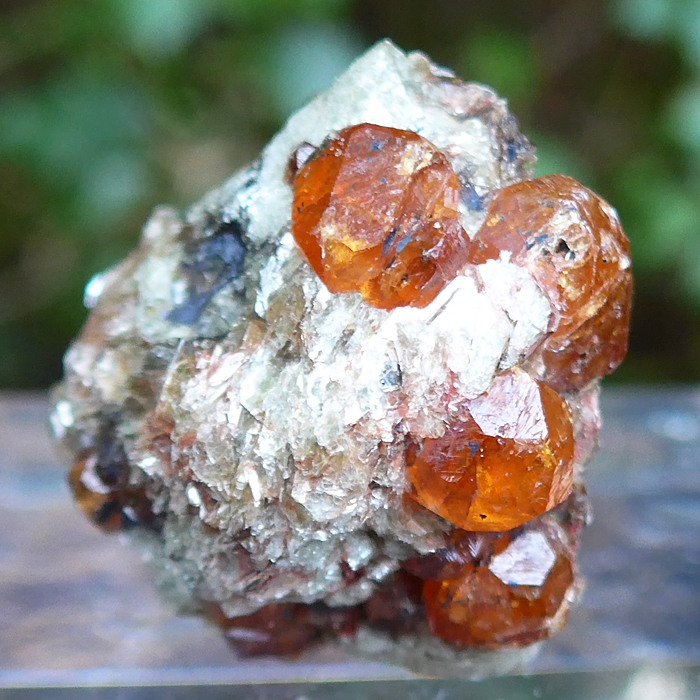 The four main constituents of the matrix are:

1. Mica - the white flaky stuff. According to many websites and rockhounds, the word "mica" is thought to be derived from the Latin word micare, “to glitter”, but the Oxford English Dictionary, says the word “mica” comes from the Latin word mica, “grain, or crumb”. The English word “mica” originally referred to any small, glittering piece of talc, selenite or other extremely tiny flakes of reflective mineral substance found in a rock formation. Over time, perhaps because of the false association with micare, the word “mica” came to refer very specifically to aluminum silicate crystals, which form in tiny plates or scales within formations of granite and other types of rock.

Crystal healers point to mica’s incredibly high reflective index as a key to its metaphysical properties. Mica is said to help the bearer to enlighten and clarify the mind, hold up a mirror to the soul, and potentiate latent clairvoyant abilities so that the individual can more easily access Higher Mind.

2. Muscovite – It’s the pink substance in the matrix. This is mica with a high concentration of manganese. Because the color pink is associated with the heart chakra in the Western system of crystal healing, muscovite is said to quicken the mind and open the heart, infusing the open heart with a sense of joy and optimism that promotes the giving and receiving of loving energies. In addition, muscovite is said to have all the metaphysical properties of mica, and to promote the bearer’s ability to see himself or herself in another person, to facilitate a deep emotional connection with a loved one, heart to heart.

3. Kyanite - Its the flat orange material in the matrix, distinctively different from the spessartite. Orange kyanite is really, really rare in nature. Kyanite is a vitreous form of aluminum silicate which exhibits great chatoyancy. Chatoyancy is the bright reflective opalescent light seen on various gemstones.

Kyanite has the distinct advantage of being one of those stones which, metaphysically, is said to remain clear & not require clearing (as are such other stones such as super 7 and citrine). It is believed that these stones do not accumulate or retain negative energy. However, we always clear & clean our crystals & Reiki attune them, because in our experience, it is always wise to keep all of your magical tools as clear as possible!
Kyanite is said to aid in balancing yin & yang energies, to enhance meditation & to unify all the chakras. As with all orange stones, orange kyanite activates the third, solar plexus chakra, strengths the will forces, aids in personality development, accelerates the individuation process, and infuses the “hara” center just below the navel with universal life force energy, or “chi”, helping to restore the individual to vibrant health.

4. Quartzite - Present in small traces. Quartzite, commonly known as “Snow Quartz”, is a hard, metamorphic rock created by heat and compression of sandstone over long geologic ages. Eventually, the sandstone, a form of silica, recrystallizes, forming tiny granules of quartz crystal, which are fused into what appears to be a single, grainy, metamorphic rock, containing the tiny quartz crystals along with traces of the companion minerals such as iron oxide, carbonate or clay, which cement the tiny granules together.

(Remember all four of these elements may not be present in the matrix found with each Orange Spessartine Garnet.)

Our Experience Working With Spessartine Garnet

Jane and I feel these Tanzanian orange fire garnets are among the most intense natural, uncut, untreated gemstones we've used for meditation and energy work in the last year.

Melody says braunite is invigorating and used in meditation, can help us view the trials and challenges we have faced and will face in past and future, and help us to see and develop and act upon strategies designed to best mitigate these difficulties.

Use this powerful crystal with loving wisdom and respect its long journey in the Earth that has lasted for many long historical cycles.Accepting this crystal into your life is a responsibility as well as a delight.

Note: Above weight is shipping weight. Actual weight is 39 grams or 195 carats.