This lovingly hand-crafted gemstone pendant was formed from a water-clear Brazilian quartz crystal which was cut and polished, then drilled and filled with gorgeous spessartine garnet chips suspended in jojoba oil, then capped with gemstone quality Amazon plum garnet.

As you can see in the picture above, the gemstone garnets are magnified when viewed from the side, when their inner fire comes alive in a most vibrant way!

The beautiful Spessartine garnets exhibit tremendous clarity and and display the range of colors collectors value most. Gemologists and mineral collectors will be amazed by the beauty of this unique pendant.

Metaphysically, the combination of clear quartz and garnets works to energize the root chakra, associated with the color red in the Western chakra system, the middle chakras, and the crown chakra, uniting the highest with the lowest, and amplifying the flow of energy from root to crown, throughout the mind, body and auric field. 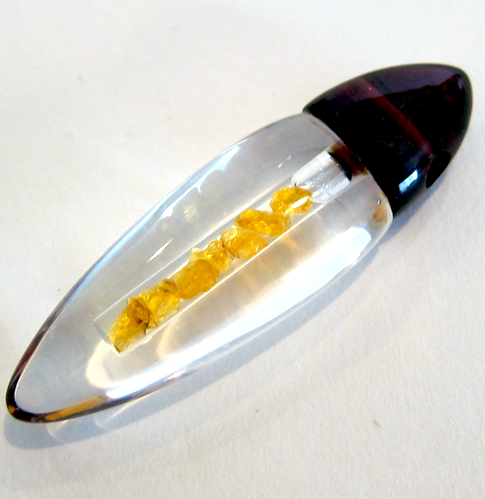 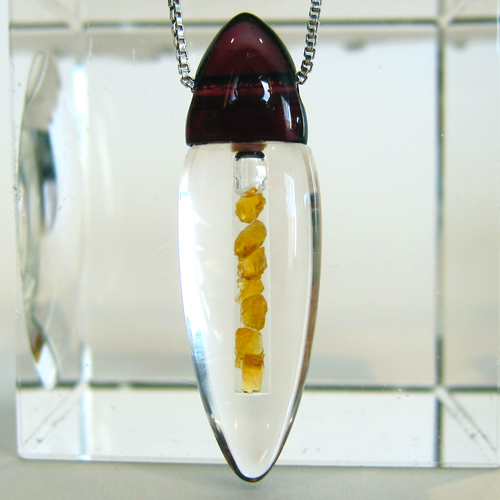 Read the full story in the article "Using Quartz Crystals in Digital Technology, Healing and Meditation".

Use this powerful crystal with loving wisdom and respect its long journey in the Earth that has lasted for many long historical cycles. Accepting this crystal into your life is a responsibility as well as a delight. This crystal is not a toy, but rather a powerful tool, a love-gift from the Divine Mother, and should be treated with the utmost respect and appreciation.

Note: Above weight is shipping weight. Net Weight is 7.1 grams or .25 ounce.