Editor’s note: Love-Lies-Bleeding is a leading flower essence for those suffering physical and psychological pain. The remedy is not a “pain reliever” in the allopathic sense. Rather, it helps lift the consciousness beyond individual suffering to identify with world suffering. In offering one’s suffering to a higher purpose, while cultivating compassion for the suffering of others, one’s own pain no longer weighs so heavily on the soul. A typical use for this remedy is for terminally ill patients. We can think of no better example of the positive Love-Lies-Bleeding archetype than Saint Francis of Assisi. 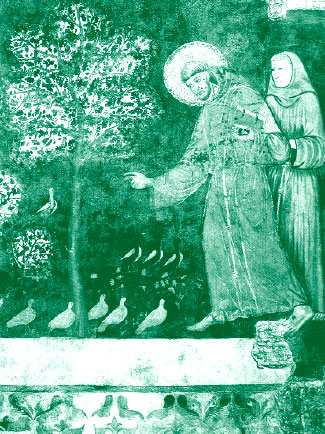 Francis of Assisi (1181-1226) was the son of a wealthy cloth merchant in Assisi, Umbria. When he was 20 years old, a war broke out with Perugia and Francis was taken prisoner. After his release, he returned home and back to his frivolous way of life.

When Francis was 25, he was inside a church, the Church of San Domiano, in Assisi. He heard a voice, and this voice told him “repair my falling house.. Francis took the words literally and sold a bale of his father’s cloth to pay for building materials. When Francis’ father learned of what he did, he was quite displeased with his son’s actions, and in a public confrontation, his father disinherited and disowned him. In turn Francis renounced his inheritance and went forth to work as a laborer and live in poverty.

Two years later Francis founded the Friars Minor— the Franciscans — with headquarters near Assisi,and in 1210 Pope Innocent III had approved his way of life, and gave him his permission to preach on moral subjects, and had Francis ordained a deacon. Its joyful and loving worship of God and its vows of poverty characterized the order.

In 1212, Francis founded a branch of his order for women, called the Poor Clares. Later he established another branch in 1221 for laymen and women called the Third Order. In 1219, during the Fifth Crusade, Francis made his famous but fruitless attempt to convert the sultan al-Kamil while the crusaders laid siege to Damietta in Egypt.

By 1219 the Franciscan Order held 5,000 Friars and then quickly increased throughout Western Europe. In 1221 Francis proposed a revision to his rule, which emphasized poverty and humility, and this was approved by Pope Honorius III in 1223.

For the last five years of Francis’ life, he held no official position in his order, but did enforce his Rule of poverty and humility.

Some of the most well-known and documented events of his life were the inauguration of the Christmas crib in 1223; his sermon to the birds; and the most known is his receiving the stigmata. St. Francis was praying on Mount Alverna, a place in central Italy where he often went to be alone. He was in the middle of a 40-day fast, feeling weak, and his eyes were burning. While he was praying and concentrating on his meditations, a vision appeared to him: an angel who was carrying an image of a man nailed to a cross.

When the vision disappeared, St. Francis felt sharp pains in various places on his body. Looking to find the source, he saw that he had five marks like those on Jesus’ hands, feet, and sides. Observers described them as “fleshy” and “nail-like... round and black, standing clear of his flesh”. His side appeared to have been lanced; his companions actually saw that wound appear, as though his skin had been slashed. During the days that followed, St. Francis’ pants and tunic were often soaked in blood. These five wounds of Christ never left him. His last two years were a time of pain, weakness and in the end, blindness. Two years after his passing, Francis was canonized a saint.

Francis of Assisi had exceptional spiritual insight, he identified with Christ’s suffering, and his words and deeds were tangible expressions of his love for God and all creation — the basis for his patronage of ecologists.

Oh, Divine Master, grant that I may not
so much seek to be consoled as to console,
to be understood as to understand, to be
loved as to love. For it is in giving that we
receive; it is in pardoning that we are pardoned,
and it is in dying that we are born to eternal life. Amen.

Much like the positive qualities of the flower, Love-Lies-Bleeding, St. Francis was able to move beyond his personal pain and suffering. He turned his anguish into compassion for others. 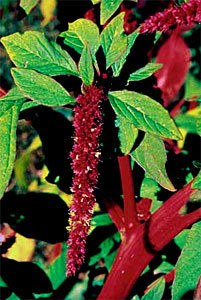 Love-Lies-Bleeding (Amaranthus caudatus) was named for its unusual, cascading red flowers that droop almost to the ground during the summer. This plant can grow to four or five feet high. Another name for this early American flower garden plant is Tassel.

The plant likes sunny areas and grows in sandy to medium loam and peat soil. Some species of this plant are cultivated for edible grain, and are considered to be highly nutritious. This plant is strong, able to survive many different soil conditions. It is much like the strength that Saint Francis had when he endured his imprisonment during the Perugian war, and the many years he spent living in poverty.

The comparison that I find most striking is the name of this glorious plant “Love-Lies-Bleeding” and the connection it has to Saint Francis’ stigmata. The plant was named because of it’s brightly colored, drooping red flowers. Almost as if the plant itself is spilling forth its life’s energy. Saint Francis experienced bleeding wounds from his hands, feet and sides, which never left him for his last two years of his.

Love-Lies-Bleeding helps an individual to move beyond personal pain, and to seek out a greater, spiritual awareness. This awareness allows the soul to change pain and suffering into compassion. However, it has been known that some who take this flower essence will sometimes experience physical or emotional pain. But, the difference in the pain felt after, in comparison to the pain felt prior to taking Love-Lies-Bleeding, is much different. A person who is experiencing a particular illness or disability will often reach out to those with similar ailments.

This is what Saint Francis did during his twenty years of living a life of poverty and humility. He showed much compassion for the poor and those less fortunate. “The deepest teaching of Love-Lies- Bleeding is centered around the meaning of compassion and sacrifice. This realization within the soul is often called Christ consciousness — the capacity to suffer or to bleed not for ourselves but for all of humanity, and for the redemption of the Earth itself.” (Quotation from: Kaminski, Patricia and Katz, Richard, Flower Essence Repertory, Nevada City, CA: The Flower Essence Society,1994).

Saint Francis loved life. He loved helping those less fortunate, and he loved all of God’s creation. He, too, suffered the wounds of Christ, but it was not for himself, it was for those who would be left on Earth. He was a very compassionate man, and this was the basis of naming him the patron saint of ecologists.

Flower Essence Society Newsletter, Spring, 2000 page 18 Reprint © 2000 by FES. All rights reserved. Flower Archetypes: Love-Lies-Bleeding and Francis of Assisi Saint Francis preaching to the birds from a fresco by Giotto. Reprinted with the kind permission of the Flower Essence Society.

(Note from Satya Center Founder, Jane Sherry: If you are interested in learning more about flower essences, reading up on groundbreaking research, flower profiles, flower affirmations, discounts on publications, practitioner referral network and member newsletters, I highly recommend investing a small amount of time and money in becoming a member of  the Flower Essence Society. It costs only $25 per year, and is a valuable way to contribute your love and energy into healing yourself, your loved ones and our only home, Planet Earth.)

You can also read the FES article "Sunflower and Love-Lies-Bleeding: A Study in Spiritual Surrender" at Satya Center.


(Photos courtesy of Flower Essence Society; Photo of the author from her website)

Kathy Edstrom is a Certified Flower Essence Practitioner, and Certified Healing Touch Practitioner. She is also a certified Laboratory Animal Technician, focusing on animal care and animal welfare.She works with pets and their companions, educating them about the benefits of flower essences for both, helping the animals with behavioral concerns and their companions with working through personal issues. Visit her website for more information.

“The Flower Essence Society (FES) is an international membership organization of health practitioners, researchers, students, and others interested in deepening knowledge of flower essence therapy. Originally founded in 1979 by Richard Katz, the society has been co-directed since 1980 by Patricia Kaminski and Richard Katz, who are married and professional partners.The Society promotes plant research and empirical clinical research on the therapeutic effects of flower essences, conducts training, certification programs, and seminars throughout the world as well as disseminating publications about flower essence and provides a communication & referral network for an estimated 50,000 active flower essence practitioners who are teaching, researching and practicing flower essence therapy in their healing work.”

The Flower Essence Society maintains a beautiful and informative website with an abundance of free research articles by & about practitioner research in the field and in depth case studies. You can make online donations at the website. You can also become a member in the society right online giving you access to an additional wealth of research essence profiles. Membership also includes access to the book, Flower Essence Repertory. The Repertory is a richly illustrated, cross referenced informative resource for anyone interested in Flower Essence therapies. Patricia and Richard also manage Flower Essence Services, which produces flower essences and herbal products at Terra Flora, their 17 acre biodynamic/organic garden and wildlife sanctuary in the northern Sierra Nevada foothills of Nevada City, California.

(Note: Jane Sherry & Curtis Lang, Satya Center Founders have been using the Flower Essence Services products for several years, and have found that they provide consistant, vital and exquisite flower essences and herbal products of a very high vibrational quality. They have a deep and profound effect personally and in their healing practice. FES very generously provides a discount for health practioners and their products are very affordable for the general public.

And, if you are interested in learning more about flower essences, reading up on groundbreaking research, flower profiles, flower affirmations, discounts on publications, practitioner referral network and member newsletters, I highly recommend investing a small amount of time and money in becoming a member of  the Flower Essence Society. It costs only $25 per year, and is a valuable way to contribute your love and energy into healing yourself, your loved ones and our only home, Planet Earth.)