I feel compelled to write about 9-11, but not to make a political statement, unless praying for Peace is a political act, which I suppose it is. No, I choose to write to you today because I have memories of the Twin Towers from my youth as an artist in NYC, as they were being built. 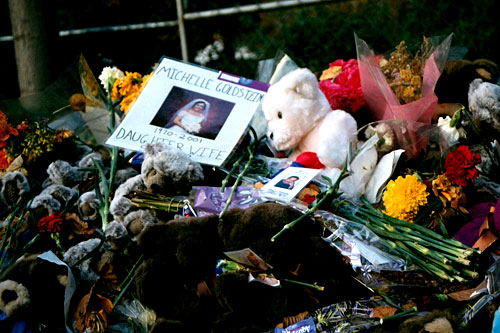 In 1975 I lived in the financial district, two blocks from Wall Street near Trinity Church in an office building with a bathroom down the hall & a shower upstairs 6 flights. A group of artists moved into this commercial building with the landlord's blessing as long as we didn’t ask him for anything other than the right to live in what was a commercially zoned building, where we could watch the Twin Towers being built from our roof. 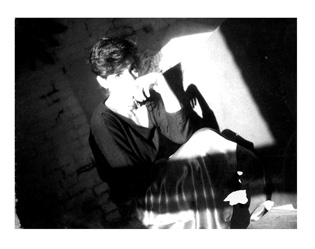 Jewelers worked in the building along with a strange mixture of other small businesses and from time to time, someone would move out & another artist friend would move in. Some of those artists went on to become famous musicians, poets, writers & artists.

This was urban pioneering by young artists. The financial district was for office workers. No grocery stores, cute bars or trendy restaurants for young hipsters. This was one of the most inspired times of my life.

I was young, in art school for a short stint & at The New School and the whole city was my canvas & classroom. Friends & art allies would have parties on 'the beach' on the lower west side of Manhattan, then an urban wasteland dominated by the obsolete West Side Highway.

We gathered almost like an impromptu mini Burning Man Festival on weekends for live music, dance, performance & Dada-esque events. We used to roam freely at the site of the World Trade Center before it was known as such, watching the giant buildings go up, watching them lay tile for the beautiful plaza outside the giants. We were among the first to be brave enough to go up in the elevators all the way to the top floor & look out at 'our' beloved city.

Years later, of course, the old West Side Highway was torn down and developers would use land-fill to create new real estate in that area, erecting up-scale west side condos & giant office buildings.

That interstitial area of downtown NYC was my formative home as an artist & the work I started under the shadow of the Twin Towers and the friends I made there provided inspiration for many years to come. The Twin Towers loomed over my next ten or so years as I gradually moved further uptown to the not yet gentrified Lower East Side. Always, I had a view of the Twin Towers. They were like a compass point, due South, so that wherever I was in my beloved city, I knew where I was. 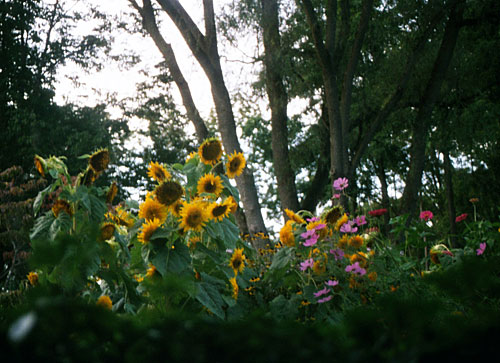 Gradually, the impulses to grow food, flowers & medicinal herbs took over & in 2000, to start the new millennium, Curtis & I moved much further north to Westchester, just outside NYC, only 40 minutes from downtown & 11 miles from the Indian Point nuclear plant.

A few months later, New York changed for ever. Like most of us, I will never forget what I was doing the day of 9-11.

I got up early to tend to my garden, to see what had happened after the intense rainstorm of the night before. It was very early in the morning, and as I boiled water for my first cup of tea I went outside to the garden.

I came back in feeling a bit upset. All of my bean teepees, the carefully staked up tomatoes & every other little fence supporting greenery had been blown down & all my herbs were tangled up together. Smashed beans, tomatoes & flowers everywhere. I realized I'd better get to work, but I felt very sad about the mess.

I went inside to drink my tea & I turned on the little tv on the kitchen table. The morning news was interrupted with the images which by now are impressed indelibly into our collective memories of that day ten years ago.

It is still so difficult to reconcile the magnificent blue sky day it was in NYC & up in Westchester County that day with the devastation of the crashing, burning, falling, smoking towers. I watched both planes hit the towers to the horror of the newscasters & myself & everyone else. 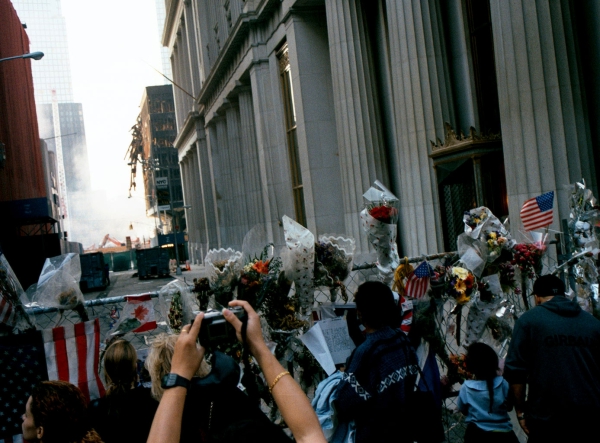 The vast, incomprehensible devastation in the city was echoed by the small-scale destruction in my garden. I felt that the only way I could make order in my chaotic emotional body was to create order in my garden. Yes, the garden would be fine, gardens rebuild themselves, given a chance, as Nature has shown us again & again. The Life impulse is strong and resilient in the plant world.

In the city, undreamt of forces of Life were already manifesting. For me, the best part of the post 9-11 world lasted for about two weeks. During those two weeks right after the Event, people came together as never before in an outpouring of Love & Support. The best qualities of people surfaced spontaneously, compassion, love, friendship, and solidarity burned brightly.

We traveled to the city to Union Square at East 14th street a couple of days after 9/11 where a spontaneous outpouring of love & (mostly) a desire for Peace had settled into the park in a Love-In of huge proportions. The Spirit of the Sixties suddenly reappeared, in a new form, for a new time. Musicians played for free while an international gathering of well wishers & mourners joined in prayerful peaceful demonstrations. 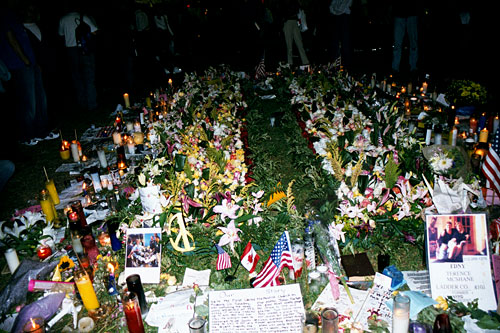 A festival of forgiveness, love and peace took place 24/7 in Union Square Park. There were no strangers there. The bronze statue of George Washington atop his horse was decorated with flowers & a huge peace sign placed on the pedestal. 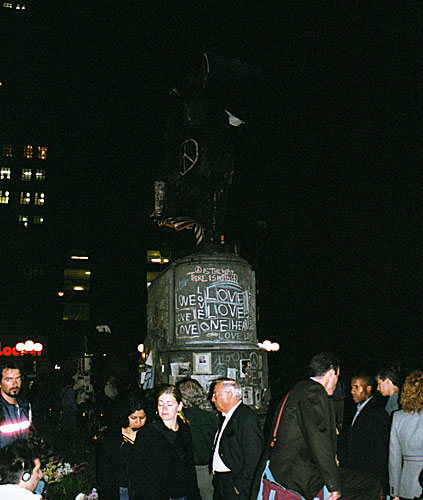 The wire fence around the park boundary was not only a bulletin board for loved ones with pictures of the missing, but also a safe space for an outpouring of poems & paeans to Peace, with Japanese college kids folding 1000 paper cranes for peace, while Christians, Jews, Muslims, atheists, new agers, white, black, yellow-skinned, corporate workers, students, immigrants, elders, babies, families, an international rainbow gathering camped out at the park. Altars of many religions and many spiritual paths appeared next to one another in an ecumenical outpouring of mutual tolerance, respect and love. 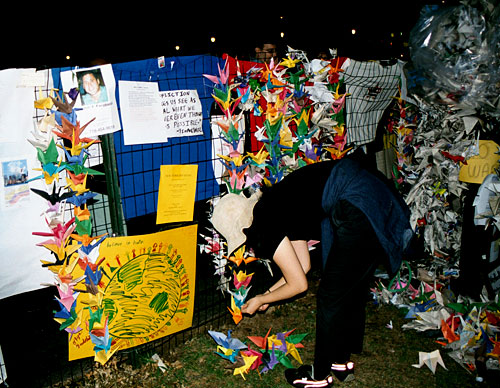 I'll never forget the sense of displacement I felt at looking downtown, southward & feeling that I didn't know where I was. My iconic landmarks were gone, all that was left was devastation, brown smoke & the promise of illness & endless sorrow for so many.

Many Lightworkers from the city, from the surrounding Tri-State area, and from around the country assisted the thousands of confused souls in transition, including our Reiki Teacher, counselor and friend Ginny Mackles. Many people in the healing community talked with great eloquence about their experiences in being called upon to assist in this spiritual journey for so many strangers. 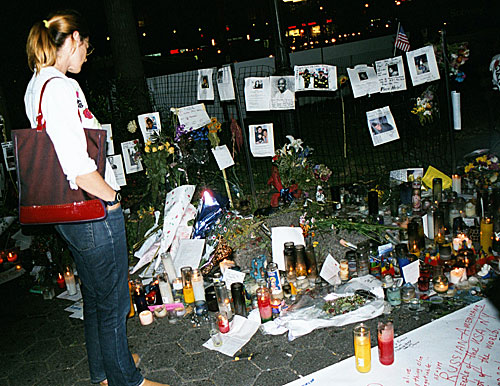 The open-hearted Love & Peace-In at Union Square lasted only two weeks before the paternalistic Mayor Guiliani tore down the only spontaneous monument to peace which was created in the wake of all that loss.

We went several times to see this extraordinary & ordinary expression of love & compassion, of hope, of sorrow & comfort from around the city & the globe. Hundreds of people milling about, quietly, reverently, touring the massive displays of love & honor & sadness.

My own deep sorrow was made much worse, when the Mayor had the altars at Union Square all bulldozed like so much garbage. Only two weeks, but in that two weeks was an expression of love & understanding I'd never seen in 'my city'. 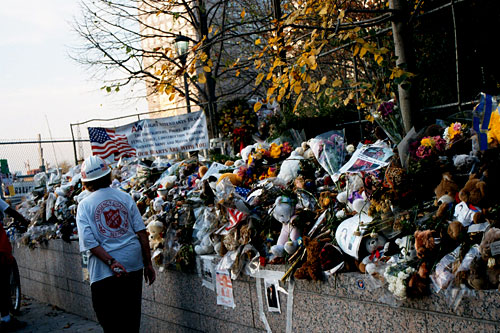 During our visits to Manhattan during this time, we explored the wreckage of the Winter Garden and the rest of the World Trade Center area. We were concerned that the toxic dust and fumes in the area would adversely impact our health. We were also very concerned about the health of first responders and others who were in the area, residents and volunteers alike. You can see the dust and fumes in the air around one of the stricken WTC buildings in one of the pictures below.

During our visits we saw regular folks, disaster responders, volunteers, news agencies, red cross workers and other aid workers from around the country and the world congregated along the West Side Highway. There were rows of satellite news trucks, army tents and red cross tents. There were restaurateurs who opened soup kitchens along the route to feed the army of volunteers. People in the healing arts volunteered their services along that sad route as well, Reiki people, massage people, psychotherapists, people who just wanted to be there to support those who had lost so much.

Everywhere downtown you could see posters with pictures of missing loved ones, offerings of flowers, stuffed animals, letters to the missing, crying hordes of sad & bereft people. 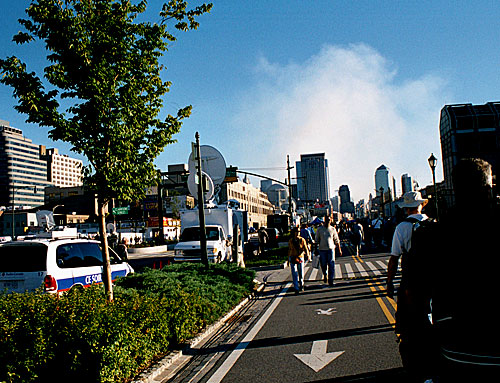 A few friends of ours saw the planes hit the towers from their living room window, then left town & left the country. Other friends moved uptown, other friends were hard to find for a few days as the phone lines went crazy with too many people searching for loved ones. Old friends from around the country & the world reconnected with Curtis & I just because time & old grievances didn’t seem to matter any longer.

I only wish that what we'd taken away from that time wasn't a new illegal government agency, called Homeland Security, I wish instead our leaders had looked to the possibilities of how healing Peace & Love can be. 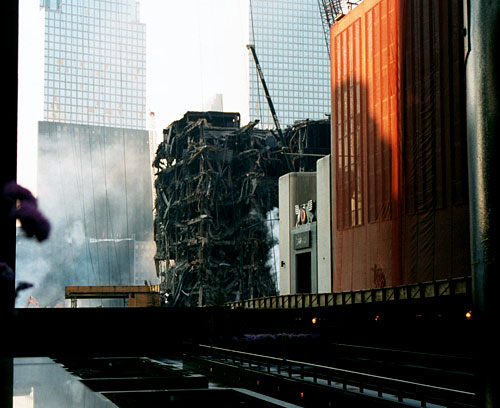 Much later, when the city called for plans among architects & artists for how to reconstruct the site, I felt the only appropriate plan would be for a remediation garden to be planted to try & clean up the extraordinary toxic load which had been unleashed.

Unfortunately, our country chose to repeat the mistakes of the past, and has chosen a path of global war and Imperial grandiosity rather than the path of love, peace, vegetal remediation and forgiveness.

Curtis & I express our deep condolences, love and wishes for healing to all those who lost someone they loved on 9-11. I wish to apologize for the way that our country has behaved, responding to violence with more violence. 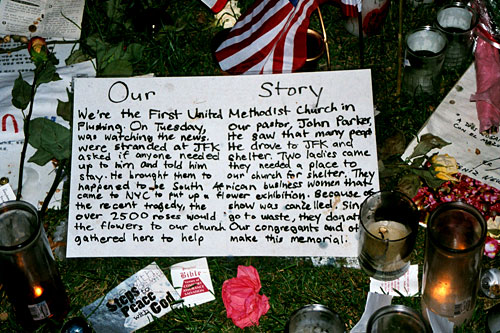 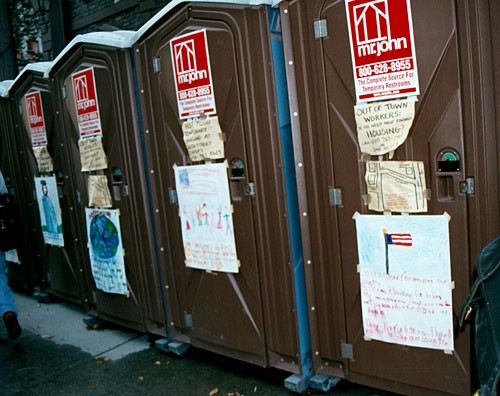 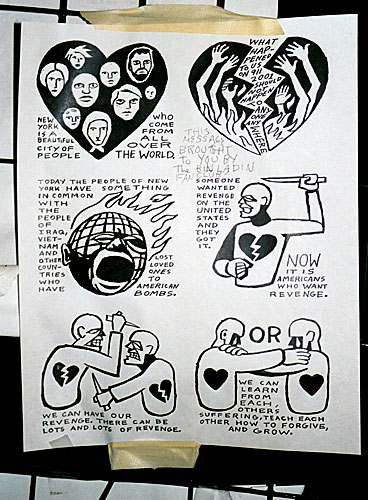 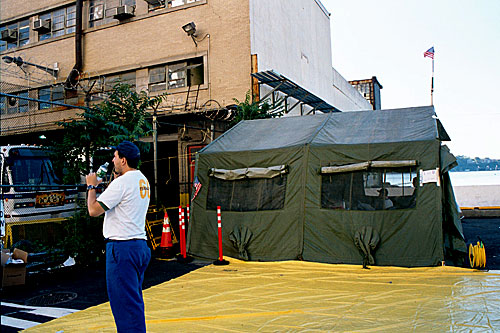 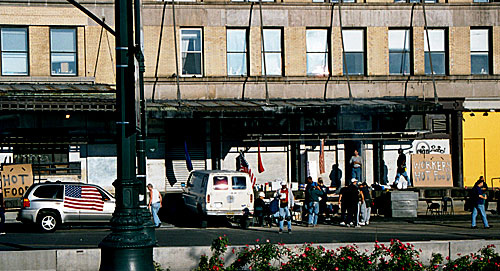 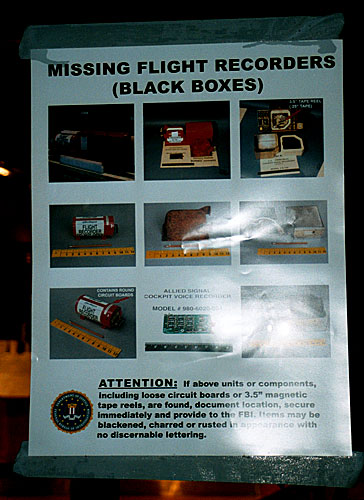 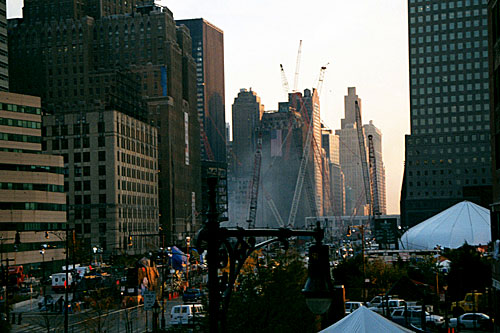 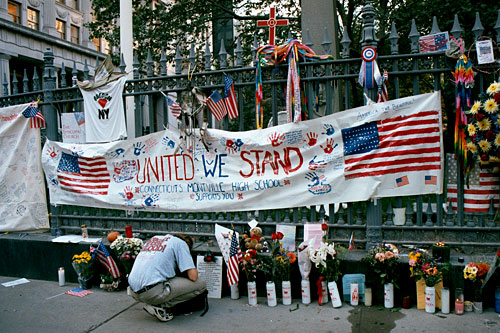 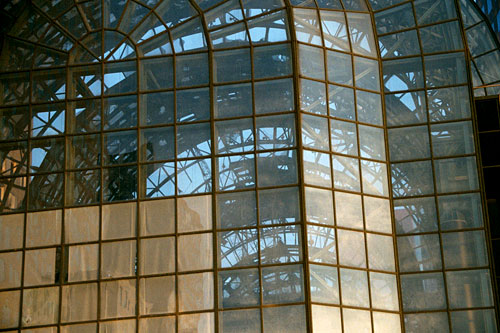 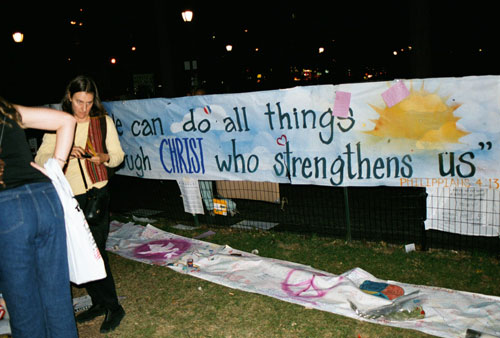 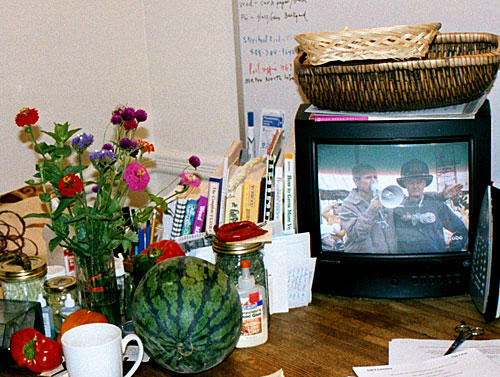 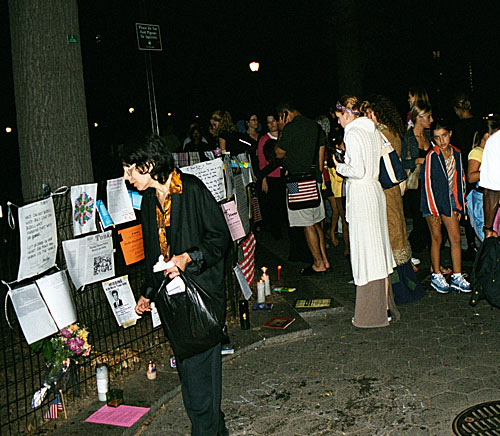 Photo Credits: All Photos by Jane Sherry 2001 with the exception of the picture of Jane from circa 1975, John Street days, taken by Aline Mare.