I first was exposed to the universal mantra: Ba’ba Na’m Kevalam back in my 20’s in the year 1970. The kirtan dance along with chanting the Ba'ba Na'm Keva'lam mantra is what really awakened my devotional sentiment!

It was at a time in my life when I was awakening socially, and becoming very active in the burgeoning ecological movement. I was living in an enviromental community which several friends and I had formed to recycle materials, and educate the public about the overdevelopment in South Dade County, Florida. We called the organization which funded this center: Ecology Action of Florida, and many people with lots of interests gathered there from candle makers to vegetarians, and a few times a couple LFT’s (Local Full Timers) with the yoga organization: Ananda Marga Yoga Society, dropped by.

One day, Rama & Sita, as these two angelic beings were called, told members of the community that a yogi was coming to the University of Miami to give a lecture on meditation. Well, all of us were very curious, and we piled into our vehicles, and off we went to hear the yogi. His name was: Acarya Yatiishvarananda Avaduta, and his accent at the time was so pronounced that I understood only a few words, yet he was light-hearted & funny, and this intrigued me; spirituality with humor – a novel idea.

It so happened that my best friend, and “drugging buddy” Chris also went, and after the lecture, he and I along with 75 or so others were standing in line waiting for ‘initiation into this Tantric meditation system.’ Well, after 5 hours solid of initiations, Dadajii (as the acaryas are affectionately called), was worn out, and stated he would return, and that those sincerely interested were to use the universal mantra in the meantime.

He must’ve known I would be one of those needing and wanting this meditation instruction, for Chris was more than willing to coach me in the use of the mantra, and even did asanas (yoga postures) with me for a month or more.

Almost immediately, my desire for a drug induced high just fell away. I began meditating regularly twice a day on these uplifting Sanskrit sounds and the underlying meaning.

Ba’ba means beloved, Love or Divine Father,
Na’m translates as name or vibration, and
Kevalam in English means only or everywhere.

Thus the complete translation is: the Beloved is Everywhere, or Love’s vibration is all there is. Thus the chanting or meditating on this spiritually charged mantra can bring one’s Self to total liberation from the material world. 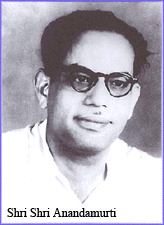 You might ask: “what does spiritually charged mean?” Well, I was told is that when a guru gives a mantra for liberation, it has been imbued with his energy or shakti; that is, the guru has realized the essence of this phrase by meditating on it till his consciousness has reached the crown chakra, the thousand petaled lotus on top of the head. At this point, the mantra has the infused “intentional power” to bring others to this supreme realization as well. Ananda Marga Pracakara Sangha’s guru is Shri Shri Anandamurti, and he left the Earth in 1990.

Whether one accepts this interpretation or not isn’t important, just the focusing of ones mind on the harmonizing Sanskrit sounds, and the expansive idea, will bring one to a complete realization of Oneness, dissolution of duality and merge their individual consciousness in the Supreme Consciousness or God.

After my initiation in Atlanta, Georgia in 1971, I was exposed to group meditation or Dharmachakra during which kirtan is sung and danced. Kirtan is a spiritual dance which precedes meditation either individual or collective, and it serves to center our mind, relax /uplift our body, and make it easier to meditate. In the kirtan of Ananda Marga, the Ba’ba’ Na’m Keva’lam mantra is chanted, and the dance done by steppinging back and forth with the big toe touching behind the opposite heel. Arms are extended overhead in a gesture of surrender to the Beloved. When a group of spiritual aspirants are dancing kirtan, and singing the mantra, it magnifies its effect, and one can certainly feel the harmonious symphony that this human family of ours creates when love prevails.

The Baba Nam Kevalam mantra has limitless expressions in its melody and the chorus of singers chanting it evokes a joyful remembrance of the Oneness of this One Mind of which we are all a part. Baba Nam Kevalam  communicates like no works of art can the spiritual truth: “All is One,” “there is no separation from the Love of God, our One Source and Creator. As the Transcental Meditation meditators have proved; mantra chanting or meditating in itself brings about a harmonious vibration on this sometimes apparently torn and divided world.

I was so taken by this path, and this mantra meditation, that after 4 years of meditating, teaching yoga asanas, and being involved in several Ananda Marga jagriti’s (another name for ashram) that I went to become an LFT myself like Rama and Sita. The training center was in Philly, and it was a 4 ½ month residential program of 4 daily group meditations, yoga classes, spiritual philosophy & sutras, vegetarian meals, Aikido classes, psychosynthesis, and much more. During the Dharmachakras (translated means: circle of people whose goal is Self realization,) the kirtans and Baba Nam Kevalam chanting continued to work on my split mind, and more and more it calmed and the brotherly love within it grew. Simultaneously, a well spring of creativity began to blossom forth. My first assignment aftergraduating from the training center was New Haven, CT, and while there, I learned to play the guitar, and sing bhajans, with the love deepening even more.

Twice a year, I went to Ananda Marga’s UKK retreats as they were called at the time, and here a real treat took place: Akhanda Kirtan, where Margiis would dance and chant kirtan for 3 hours up to 24 hours, the latter being the way the 5 – 7 day retreats would end. 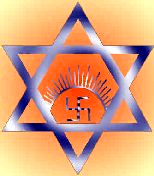 The waves of spiritual bliss at these large gatherings must have resembled some of the Indian festivals so intoxicating were they. After kirtan and chanting the mantra, group meditation was always done to ground the vibration and help us unify our minds. A sloka from the Rg Veda – Sumgachdvam’ meaning: Let us move together, was sung just before the quiet meditation time.

In this years retreat, commemorating the organization’s 50 year anniversary, held at Ananda Marga’s North American retreat center in Willow Springs, MO., I was utterly ‘blown away,’ with the honor of playing my djembe along with other musicians who were coming up with the kirtan tunes, and leading the Baba Nam Kevalam chanting. At many times during this musical experience, I allowed myself to let go completely, and just let the Lord God play the drum through me, thus releasing any tendency to perform music.

I bought a Baba Nam Kevalam  kirtans album which the many musicians in Ananda Marga have recorded and they call themselves the Kundalini Express. It is excellent background for chanting my own kirtan, but also works excellently in the car, when I’m driving somewhere, and want to keep my mind on God, and not get into the hurry sometimes tempting us auto drivers these days.

Any curious, happy or serious minded souls that want to learn more about Ananda Marga, Ba’ba’ Na’m Kevalam, kirtan, meditation, yoga or whatever is invited to go to the web portal: AnandaMarga.net, or call me at (870) 405-6464 if you’re in Arkansas, Louisiana, Mississippi, Tennessee, or Alabama. I’ll put you in touch with the regional acarya (preceptor or instructor), maybe acting in some small way like Chris did for me some 35 years ago.