Why did so many animals escape the December 2004 tsunami? 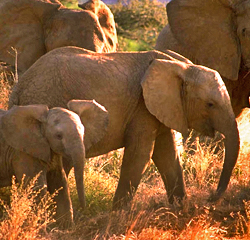 Many animals escaped the great Asian tsunami on Boxing Day, 2004. Elephants in Sri Lanka and Sumatra moved to high ground before the giant waves struck; they did they same in Thailand, trumpeting before they did so. According to a villager in Bang Koey, Thailand, a herd of buffalo were grazing by the beach when they “suddenly lifted their heads and looked out to sea, ears standing upright.” They turned and stampeded up the hill, followed by bewildered villagers, whose live were thereby saved. At Ao Sane beach, near Phuket, dogs ran up to the hill tops, and at Galle in Sri Lanka, dog owners were puzzled by the fact that their animals refused to go for their usual morning walk on the beach. In Cuddalore District in South India, buffaloes, goats and dogs escaped, and so did a nesting colony of flamingos that flew to higher ground. In the Andaman Islands “stone age” tribal groups moved away from the coast before the disaster, alerted by the behaviour of animals.

How did they know? The usual speculation is that the animals picked up tremors caused by the under-sea earthquake. This explanation seems to me unconvincing. There would have been tremors all over South East Asia, not just in the afflicted coastal areas. And if animals can predict earthquake-related disasters by sensing slight tremors, why can’t seismologists do so?

Animals also seem to know when other kinds of calamities are about to strike. In my recent book The Sense of Being Stared At, I summarize a large body of evidence for unusual animal behaviour before earthquakes, including recent earthquakes in California, the 1995 Kobe earthquake in Japan and the 1997 earthquake in Assisi, Italy. In all cases there were many reports of wild and domesticated animals behaving in fearful, anxious, or unusual ways several hours hours or even days before the earthquakes struck. The same is true of the 1999 earthquake in Turkey, with its epicentre near Izmit. Dogs were howling for hours before the earthquake, and many cats and birds were behaving unusually.

On February 28, 2001, a 6.8-magnitude quake struck the Seattle area, and once again animals behaved unusually beforehand. Some cats were said to be hiding for no apparent reason up to 12 hours before the earthquake; others were behaving in an anxious way or “freaking out” an hour or two before; some dogs were barking “frantically” before the earthquake struck; and goats and other animals were showing obvious signs of fear.

No one knows how some animals sense earthquakes coming. Perhaps they pick up subtle sounds or vibrations in the earth; maybe they respond to subterranean gases released prior to earthquakes, or react to changes in the Earth’s electrical field. They may also sense in advance what is about to happen in a way that lies beyond current scientific understanding, through some kind of presentiment. 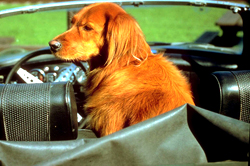 Animals can also anticipate man-made catastrophes such as air raids. In my book Dogs That Know When Their Owners Are Coming Home, I describe how during the Second World War, many families in Britain and Germany relied on their pets’ behaviour to warn them of impending air raids, before official warnings were given. These warnings occurred when enemy planes were still hundreds of miles away, long before the animals could have heard them coming. Some dogs in London even anticipated the explosion of German V-2 rockets. These missiles were supersonic and hence could not have been heard in advance.

Unusual animal behaviour also occurs before avalanches. On February 23, 1999, an avalanche devastated the Austrian village of Galtur in the Tyrol, killing dozens of people. The previous day, the chamois (small goat-like antelopes) came down from the mountains into the valleys, something they never usually do. Through surveys in alpine villages in Austria and Switzerland, I found that the animals most likely to anticipate avalanches are chamois and ibexes, and also dogs. Although it is still unexplained, this ability would obviously be of survival value in mountain animals, and would be favoured by natural selection.

With very few exceptions, the ability of animals to anticipate disasters has been ignored by Western scientists, who dismiss stories of animal anticipations as anecdotal or superstitious. By contrast, since the 1970s, in earthquake-prone areas of China, the authorities have encouraged people to report unusual animal behaviour, and Chinese scientists have an impressive track record in predicting earthquakes. In several cases they issued warnings that enabled cities to be evacuated hours before devastating earthquakes struck, saving tens of thousands of lives.

By paying attention to unusual animal behaviour, as the Chinese do, earthquake warning systems might be feasible in California, Greece, Turkey, Japan and elsewhere. Millions of pet owners and farmers in earthquake-prone areas could be asked to take part in this project through the media. They could be told what kinds of behaviour their pets and other animals might show if an earthquake were imminent - in general, signs of anxiety or fear. If people noticed these signs or any other unusual behaviour, they would immediately call a telephone hotline with a memorable number - in California, say, 1-800-PET QUAKE. Or they could send a message on the Internet.

A computer system would analyze the places of origin of the incoming calls. If there were an unusual number of calls it would sound an alarm, and display on a map the places from which the calls were coming. There would probably be a background of false alarms from people whose pets were sick, for example, and there might also be scattered hoax calls. But if there was a sudden surge of calls from a particular region, this could indicate that an earthquake was imminent. The same principles would apply to tsunamis.

To explore the potential for animal-based warning systems would cost a small fraction of current earthquake and tsunami research. By doing this research we would be sure to learn something, and could probably save many lives.

At present, many millions of pounds are being allocated for setting up tsunami warning systems. I hope that those responsible for spending this money will not ignore what animals can tell us.

The Sense of Being Stared At and Dogs That Know When Their Owners Are Coming Home, are available from Rupert's website:
US and Canada
UK and Ireland

This article was first published in The Ecologist magazine in March 2005. Reprinted with permission of the author.

Rupert Sheldrake is a biologist and author of Dogs that Know When Their Owners are Coming Home, and Other Unexplained Powers of Animals (1999), a sequel to his best-selling Seven Experiments that Could Change the World (1994).

His most recent book is The Sense of Being Stared At, And Other Aspects of the Extended Mind (Hutchinson 2003).

He lived for a year and a half at the ashram of Fr Bede Griffiths in South India, where he wrote A New Science of Life (Blond and Briggs, 1981). He is also the author of The Presence of the Past (Collins 1988), The Rebirth of Nature (Century, 1990),Trialogues at the Edge of the West with Ralph Abraham and Terence McKenna, (Bear and Co., 1992) and The Evolutionary Mind (Trialogue Press, 1998). His book Seven Experiments that Could Change the World (Fourth Estate, 1994) was voted Book of the Year by the British Institute for Social Inventions.

With Matthew Fox, he is the author of Natural Grace: Dialogues on Science and Spirituality (Bloomsbury, 1996) and The Physics of Angels (Harper Collins, 1996). His book Dogs that Know When Their Owners are Coming Home, and Other Unexplained Powers of Animals (Hutchinson) was published in September 1999, and won the British Scientific and Medical Network Book of the Year Award. In July 2000 he was the H. Burr Steinbach visiting scholar at the Woods Hole Oceanographic Institution, in Massachusetts.  His most recent book is The Sense of Being Stared At, And Other Aspects of the Extended Mind (Hutchinson 2003). He is currently a Fellow of the Institute of Noetic Sciences, San Francisco. Rupert lives in Hampstead, London, England with his wife, Jill Purce and their two sons. Jill is the pioneer of the international sound healing movement. Website: Jill Purce.

Rupert's website includes articles, research and ongoing research the public can participate in, a free e-newsletter, a cool glossary with definitions of such terms as: dialectical materialism, entelechy, evolution and teleonomy and much more.

(All photos in this article are clip art except for Rupert Sheldrake's photo, which came to us courtesy of the author.)