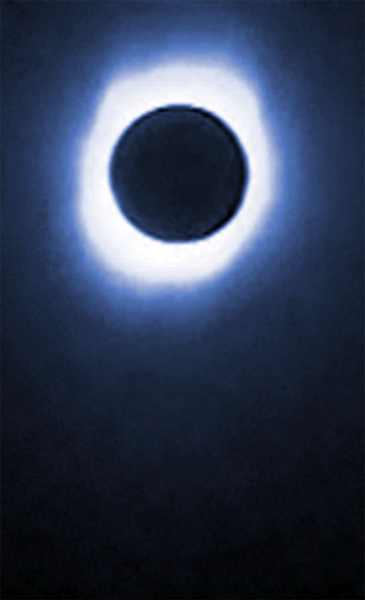 There came Time when the Two-Leggeds got up and left the Circle. Nobody knows why they left the Circle. Maybe they had to take a leak behind a bush. No one knows. After some time had passed, their absence was noted. Then the members of the Circle of Animal Brothers began to wonder amongst themselves and expressed their wonderment, in addition to their original Tellings.

“I wonder where our Brothers have gone?”

“I wonder where those Two-Leggeds are? I saw them get up and leave the Circle.”

“I wonder why it is dark? What is this thing, Darkness? Why does it lie beyond our Circle? Why have our Brothers, the Two-Leggeds, wandered into this place of darkness? Why have there they gone and left our Circle open?”

Grandfather Fire, hearing these additions to the original Tellings, and noticing the resultant alterations in the unfolding of Creation, then called upon his best hunter and seeker of the night to go in search of the Two-Leggeds. For that purpose, he chose Owl.

Owl, who can sense everything in the darkness, searched and searched throughout his entire hunting domain. Owl, not finding his Brothers, called out, “Grandfather, my Brothers, I can find the Two-Leggeds nowhere. They must be dead!”

And so it was, and so it is, and so shall it ever be that Owl is the harbinger of Death.

Now the members of the Circle of Animal Brothers, in addition to their original Tellings in that original and sacred language of Spirit, began to question amongst themselves, “What is this thing, Death?”

“Where in the Darkness is Death?”

“Why is Death in association with the Darkness?”

Grandfather Fire, hearing these even further additions and alterations to the original and sacred Tellings, chose his most beautiful of all creations to go in search of the Two-Leggeds. He chose the one whose every single feather was glistening, gleaming silver. He chose Raven.

He set Raven forth through the darkness. Raven flew for Time upon Time, aeon upon aeon, until at last, coming through the slamming rocks at the Gates of Death, Raven slipped through and into the Land of Death, that the Two-Leggeds had come to refer to as Life.

Raven understands then that the Two-Leggeds had lost their ability to communicate in the common yet sacred language of Spirit.

Raven, so that his Brothers in the Circle might know for themselves the state and condition of the Two-Leggeds, places in his beak some of that stickiness that is uniquely human: Sadness and Despair (which is to say: Emotion). With that, Raven slips back through the slamming rocks at the Gates of Death and sets forth upon his return journey to Grandfather Fire and the Circle of Animal Brothers. 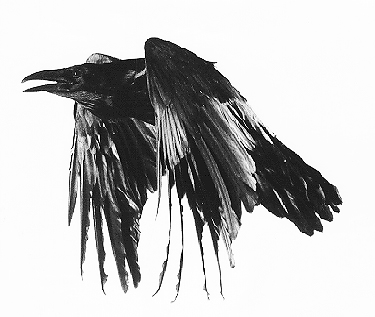 As Raven flew, the stickiness drew upon his life force and as it drew, it grew and it grew, becoming heavier and heavier. Raven flew lower and lower. Deeper and deeper and deeper into the Darkness Raven flew. Soon the stickiness filled Raven. So greatly did it draw upon his life force, so great did it grow, that it began to exude from within him until his every single bright, glistening, gleaming silvery feather was covered with stickiness, and to that stickiness clung the Darkness. By the time that Raven had returned to the Circle of Animal Brothers and Grandfather Fire, he was dark as the Night itself.

Upon his return, so that each might know for themselves the condition of their Brothers the Two-Leggeds, Raven took from his beak that stickiness, and passed it around. Each of the members of the Circle of Animal Brothers in their turn felt of it, smelt of it, and tasted it; then passed it around the Circle.

And now, each of the Animal Brothers, having imbibed of the stickiness of emotion, in addition to their Tellings in the common and sacred language of Spirit, began to discuss among themselves what must be done.

“You know, we’re going to have to go and bring our Brothers back.”

“No, no, this we cannot do. For we ourselves would have to leave our Circle.”

“Then leave our Circle we must. We’ve got to get them back.”

“No, no, you don’t understand. If we were to leave the Circle, then we must ourselves go into the Darkness.”

“Then into the Darkness we must go.”

“No, no, no. What if we go into the Darkness? Then, into the Land of Death we would have to go to find our Brothers.”

“Then into the Land of Death we must go.”

“Then that is a risk we must take; we must risk Death itself to bring our Brothers back home.”

“But we must do this. We have a responsibility to them.”

“We have no responsibility to them. They are the ones who left our Circle of their own accord. Let them find their own way back.”

“No, no, no Brothers, we have to bring them back.”

“No they are the ones who left and broke our Circle.”

Grandfather Fire, hearing them argue in this manner, knew then that something must be done. 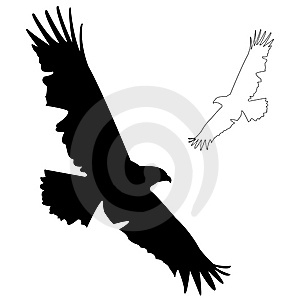 Eagle landed. As his talons touched the Earth he took on the form of a human, the one we refer to as Eagle Brother/First Shaman. This he did to bring to the people, ‘the Ways’. This he did so that through the application of ‘the Ways’, each would have the opportunity of seeking and finding fulfillment of their own unique path of reunification with Grandfather Fire. That is, that we, who are here on the Earth - our Grandmother, the primordial feminine principle of Creator - would have available to us the methods and techniques, songs, ceremonies and meditations through whose application we would each be enabled in our Quest for our own Spirit’s Truth, our own autonomous path of Self-Realization; our path of return to Grandfather Fire - the primordial masculine principle of Creator. The gift of Eagle was given so that we, who are here in the flesh, would awaken as Spirit.

Furthermore, Eagle Brother/First Shaman chose twelve humans from amongst those on the planet and initiated them, passing into their caretakership ‘the Ways’, giving them instruction in the initiation of their successors, in the transmission of these Ways down through the twelve lineages established, so that all across the Earth, throughout the many, many, many generations to come, ‘the Ways’ would be accessible; so that any person of sincerity, commitment, integrity, dedication, from anywhere upon this planet, at any time, who would seek to avail themselves of these ways, would find that opportunity. These are the ways of Eagle Brother, First Shaman.

Neoarchaic Ecstatic Shamanic Techniques with Jade Wah'oo Grigori, Caretaker of the Ways, help you to redream your life and rediscover the sacred within you. Jade runs wilderness camps for drum making, sacred warrior awakening, men's empowerment, shamanic dreaming, shamanic trainings, soul retrievals, spiritual parasite removal, story telling, private healings and much more. Check out his website for his calendar, to see when he'll be in your area, and to schedule a session. Check out the Jade archive at Satya Center. You can find Jade in the alt.healer directory at Satya Center. Or send an email to Jade.