2012: The End of the Beginning of the Great Transformation

Among “those who know” that something REALLY BIG is in the works for the
decade of the 2010s, a marked tendency exists to focus on 2012 as the “Oh My
God!” year.

This group includes at one end people of a strongly occult, metaphysical, or New
Age spiritual, or fundamentalist Christian bent, who include as trusted sources
such diverse predictors as Nostradamus, Edgar Cayce, the Mayan Calendar, the
Bible, and/or various “channeled” sources from other realms who speak through
trance mediums and the like. These folks often hold a cherished and optimistic
belief that collectively we (or some smaller segment of us---the chosen people)
are in for a Great Awakening into a Golden Age of Peace, Harmony, and Justice. 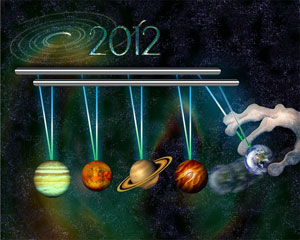 At the other end of the spectrum are the Doomers, those who for a diversity of
reasons feel that we are about to reap the whirlwind and get a terrible
comeuppance the likes of which humanity has never before suffered. People at this end of the scale foresee imminent global catastrophes from environmental disruptions, disease pandemics, new wars, nuclear terrorism or other radiation events (such as Fukushima), drought, famine, etc. They believe not only that we are fast approaching the end of cheap energy from the downward slope of Peak
Oil that fueled the Industrial and Technological Revolutions, but that civilization
itself is destined for imminent and inevitable Collapse. Some of these folks are
stockpiling supplies of food, water and guns/ammo as I write, for they anticipate
just around the corner a time of severe and often violent social disruption.

Despite the apparent contradiction between the expectations and beliefs of these
two ends of the Change scale---optimistic anticipation at one extreme and dire
pessimism at the other---both groups tend to share the idea that 2012 is the
Year They Have Waited For. Many people in both camps foresee 2012 as the
year of either Revelation or Armageddon (and sometimes both).

I want to clarify and re-state my own perspective on 2012’s implications from
two intertwined sources: History and Civilizational Astrology. For me, these two
sources do not stand alone. The information I glean from each influences my
understanding and refines my interpretation of the other.

Because I have written so many essays and articles about this pivotal period in
civilization---almost 100 so far since the beginning of the century---the question
arises: Has my own perspective changed on the symbolism, meaning, and
implications of that singular year, 2012? Well, yes and no. There has been an
evolution for me over the past decade in my general beliefs about what’s
coming, a firming-up if you will of perceptions held for much of my life. Over
time, I’ve become less diplomatic and more ballsy in my pronouncements about
what’s on the way. But my beliefs about 2012 were shaped most by the
astrological research I did between 2005 and 2008, and those beliefs haven’t
changed much, if at all, since then. My writing has changed, of course, and that
may have caused some misunderstandings among readers as to what my
position is.

So, what follows is as blunt, direct, and grounded a clarification as I can offer
about the timeline of likely events and their potential impact on the billions of
people who are currently asleep, unconcerned, or in denial about the huge
changes coming down the pike that are waiting to engulf us collectively. 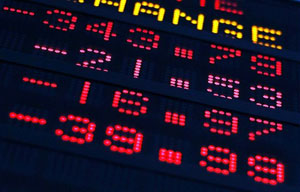 My take on the astrology of 2012 and beyond (basically, through the symbolism
and history of the Uranus-Pluto first-quarter square) is that this entire decade
will be marked by an unfolding series of sporadic but ever-more-frequent shocks.
The collective breakdowns/awakenings/cosmic cattle prods/whatever will most
likely unfold in increments. Each new development in the accelerating cascade of
collapse/breakdown events will cause a small percentage of former sleepers to
be jolted awake. No single event or time period in the years ahead is likely to do
more than that. Though the pace of change does accelerate, the overview is still
little by little rather than all at once.

Example: a global pandemic would certainly cause worldwide concern and even
panic, but that hysteria would be restricted to obsession with health concerns
centered around whatever the particular phenomenon was. Meanwhile, other
levels of Ah-Ha! awakening (financial, economic, social, etc.) would retreat into
temporary dormancy, waiting for their own particular and repetitive triggers to
bring them back to center-stage. This is not because changes occur in linear
fashion only one a time, but rather because the public’s ability to deal with more
than one problem at a time is extremely limited.

June 24, 2012 is the “critical mass” point, the date of the initial partile pass of
Uranus in first-quarter square to Pluto (exactly 90° ahead). That day, month,
and even season does not, however, represent any “great awakening.” Rather, it
is simply the first of the seven exact passes Uranus will make to Pluto over the
three years from summer 2012 through spring 2015. In terms of real events that
go with the symbolism, however, we have to stretch out the timeline, extending
it for many years before and after 2012.

The Saturn-Uranus-Pluto alignment of the 1960s was focused into 15 months
over April 1965 through June 1966. Yet, the failed Bay of Pigs Invasion in 1961
and resulting Cuban Missile Crisis in 1962---both of which preceded the actual
Saturn-Uranus-Pluto alignment by many years---were kick-off events to the
symbolic meaning of that halcyon decade. We were already well into the
revolution by 1965 (in music, social equality, race riots, beginning of the
American phase of the Vietnam war, the alternative subculture, etc.), but Life
Magazine didn’t come out with its Haight-Ashbury cover story until April 1967,
after the alignment was over.

My own embrace of the counter-culture didn’t
occur until I was out of high school and into college in the fall of 1967. From
there, it was only about a year before I was completely transformed into a freak.
In other words, in terms of reaching the middle of the bell curve of population
demographics, the astrology contains a built-in time lag of one to two years. 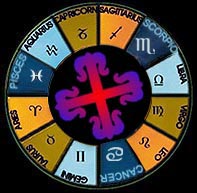 We’ve already had the Iraqi Insurgency (2004), Hurricane Katrina (2006), the
first salvo of global financial collapse (2008), and now the
earthquake/tsunami/nuclear meltdown in Japan (2011), all occurring well before
the critical mass point. And the full ramifications of critical mass will not occur
until well after the fulcrum of 2012 is crossed.

So, mid-2012 represents not a peak, but instead the “point of no return.” Still,
that’s only the beginning, and not a culmination in any sense. By 2013, the
segments of the population that were already awake and knowledgeable (albeit
with considerable ambivalence) will have combined with larger numbers of those
newly jolted into shock and concern to form a sufficiently broad demographic as
to make further denial impossible (The Saturn-Uranus-Pluto T-square that is Step
1 of the Texas-Two-Step---with its hallmark of denial---will end in August 2011,
fully ten months before Step 2, the Uranus-Pluto square---full shock and awe---
begins to gear up).

When I say that further denial will be impossible after June 2012, I refer to the
public at large, not the Ruling Elites. The Powers That Be will probably give up
their stupefying denials of 2007-2011, but will then begin a strategic retreat as
slowly as possible through proposal and implementation of “reforms” that will, of
course, be mostly useless, ignorant, foolish, and unworkable. They will continue
this “fighting retreat” all the way through 2015 (assuming, of course, that the
economic/financial/social fabric of the country has held together to that point,
which we can’t yet predict accurately).

Just as occurred in the 1930s and 1960s, once the breakdown/collapse is
widespread and the accompanying revolutions underway, another segment of
the population will go into staunch and entrenched reaction, stubbornly clinging
to the dying past even as they acknowledge the storm sweeping around them.
That percentage will decry what is happening on bogus moral and religious
grounds. 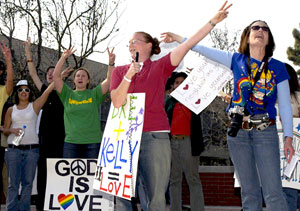 My understanding of history and astrology suggests that at no point in the
upcoming decade---no matter whether what happens turns out to be horrifically
cataclysmic or merely wrenchingly dislocating---will there be anything remotely
approaching a “general awakening” into sanity throughout the global population.
That sanity will, however, occur in selected pockets, where creativity,
cooperation, and pragmatism will allow people in that locality to do very well in
adaptation to whatever changes are required.

In general, however, all the many forms of response to crisis will be seen. On
the positive side, we should see some evidence of awakening, some calm
awareness, some social activism and pragmatic picking up the pieces---but this is
likely to occur within a minority of the population, say 10-30% as a guess. The
remaining 70-90% will move through all the diverse expressions of more
negative reaction---shock, fear, horror, hysteria, panic, catatonia, surrender,
revolt, violence, grief, gonzo magical thinking, religious lunacy, etc. Those in the
first group who have their feet on the ground and are thinking straight will do
what they can to take care of those in the basket-case, looney-tunes second
group, with varying degrees of success and failure, depending on local
conditions.

I don’t expect at any time in the next decade (or ever, for that matter) that
“hidden information” (like the Pentagon Papers and Wikileaks) or massive
misdeeds among the Ruling Elites (whose transgressions and crimes over the
past century are literally what got us into this mess in the first place) will be laid
bare in any way to which the overall general public pays much, if any, attention.
Revelations will continue to surface, of course, but they won’t matter much. The
great bulk of people will be preoccupied with whatever personal/familial
difficulties they suffer from the breakdown/collapse. Reasons why collapse
occurred will be moot. What will matter is how to pick up the pieces and get on
with living.

My private expectation is that we probably can’t look for any real or effective
responses at the collective level to the accelerating cascade of crises until the
last four years of the decade---2016 at the earliest. My more pessimistic side tells
me that we can wait for the positive changes until we’re blue in the face,
however, which means that they’ll simply NEVER occur in our lifetimes. Quite
possibly not until the 2040s, if then. The decade of the 2010s, however, will
almost entirely be taken up with short-term responses and dubious quick fixes to
a multi-faceted long-term crisis---a set of interconnected challenges that will
shape the next 400 years of human social evolution. 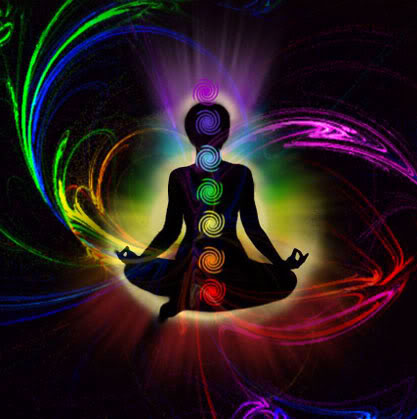 Morality? Justice? Truth? Forget all those in the decade ahead. What counts will
be Pragmatic Responses to Forced Change: Doing what is Necessary to Survive.
In the words of Winston Churchill after the Battle of Britain in 1940, the year
2012 will represent not the End---not even the Beginning of the End---but it
might be the End of the Beginning. Think of 2012 as the tipping point past which
a Brave New World awaits and will unfold.

The caveat to all this is that the future---like a greased pig---has a perverse way
of confounding and eluding even the most savvy predictions. That’s especially
true of the Uranus-Pluto cycle. So, I’m quite possibly full of shit about much of
this.

I hope I’m around to find out, however.