This article first appeared in WORTH magazine. 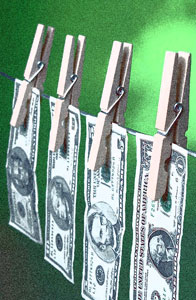 Forget "Miami Vice" and high-speed chases on cigar boats and shootouts with SouthAmerican thugs armed with semiautomatic weapons.The really heavy federal drug enforcementartillery is now being trained on suburban car salesmen."It's a continuing crackdown...against allkinds of trades and businesses...basically anybody who handles cash," explains Charles Intriago,publisher of "Money Laundering Alert," a monthly Miami newsletter."There are at least a hundredundercover IRS cases going on around the country right now."

In Money Magic, FBI agents and police posing as drug dealers approached car salesmen,managers, and insurance agents.They said they wanted to pay cash, and would pay extra for help inconcealing their identities.Some car salesmen allegedly agreed to accept the fake identities, and filedfalsified forms with the IRS.

Federal law requires car dealers and other businesses, including sellers of aircraft, antiques, art,boats, coins, furniture, insurance, furs, jewelry, perishables, securities, and real estate, to notify the IRS when receiving more than $10,000 in cash in one or more related transactions, using Form 8300.

But that doesn't explain why the government charged the entire Lustine Group of automobiledealerships and Geneva Enterprises, owner of the well-known Rosenthal chain of dealerships, with money laundering and conspiracy, and has sought the forfeiture of about 60 cars, worth nearly two million dollars, and money in bank accounts totaling some $800,000. Lowell Kairys, president of the Lustine Group, was threatened with forfeiture of Lustine real estate, although U.S. Attorney JayStephens subsequently backed down from that demand. (The indicted employees could receive jail sentences of up to 25 years, and fines of up to $100,000 apiece.)

"The way the government is enforcing the law in this instance is by using a should-have-known' standard," argues Gerard Murphy, president of the Automotive Trade Association-NationalCapital Area."They're saying that if the car dealers didn't know their employees were laying down for the drug trade, they should have known. That's just bullshit."

Kairys says he made the war against drugs a priority. He holds three meetings a year onmoney laundering and warns employees that they will be fired if they fail to comply with federal cashreporting laws."Everybody knew they would be terminated if they did any of this," Kairys explains.

"But it didn't deter a few people from doing it, and the corporation gets nailed with it."

Intriago says that over the last three years the government has prosecuted about 35 other cardealers for money laundering, obtaining 34 convictions." There have been tons of cars seized, bank accounts," Intriago recounts."There have been cases of real estate being seized."

Only a shortage of manpower prevents the IRS from increasing the number of stings.The IRS can't keep any profits from its undercover operations. The Justice Department, however, can "churn"its forfeiture fund.Looks like a lot of FBI agents will be shopping for new cars, and boats, and antiques and....